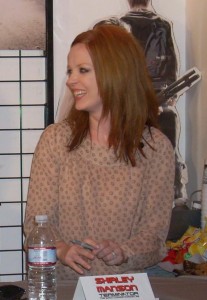 Now that we’re in the 2010s, I have to admit that my head is still stuck in the 90s (and sometimes in the 80s). After realizing that it’s been 15 years since I developed a crush on Garbage lead singer Shirley Manson, aka the hottest thing to ever come out of Scotland, I looked her up only to realize that she is now 43. While 43-year-old women are capable of being hot, I’d say we all prefer them when they’re 28. Regardless, even in her 40s, Shirley Manson is still smokin’ (the photo here proves it), and now is a good a time as any to reflect on why this woman hypnotizes us, both visually and vocally, even after more than a decade removed from when she originally caught our attention.

First, let’s watch a mashup of her singing Garbage’s #1 Crush from 1996’s William Shakespeare’s Romeo and Juliet, the hottest song sung by anyone ever in the history of infinity. Seriously – what’s hotter than #1 Crush? Madonna’s Justify My Love? Not even close. If you can think of a song hotter than this, name it in the comments. Enjoy, and you’re welcome.