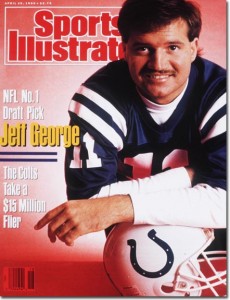 As we mentioned in the Six Questions with Matt from YepYep, he has launched a new 90’s nostalgia site called Ice Ice Babies. As someone who graduated high school in ’96, I look fondly upon that decade, and appreciate being returned to it from time to time. I remember the drafting of a mustached Jeff George in 1990, and his eventual trading to the Atlanta Falcons, where he guided the Run and Shoot offense. Apparently Ice Ice Babies doesn’t think his career went as well as expected, as they rated George a bust. While I disagree with some of their ratings, I do enjoy taking the look back at the NFL’s 1st Overall Draft Picks of the 1990’s. Remember Ki-Jana Carter?