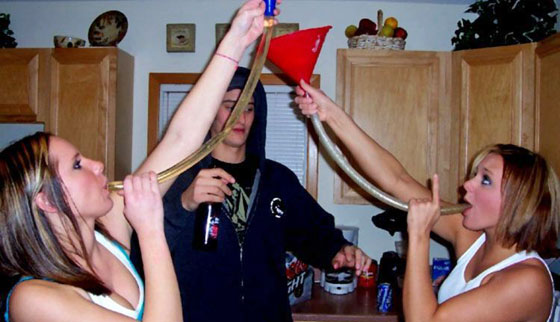 The Beer bong, a simple invention that usually gets the party mood going. Usually at some stage of a social drinking gathering, this plastic device will make an appearance and when it does remember to have your video recording devices ready.

As much as this idea may seem plausible, we just feel the way a beer bong was intended to be used works well enough. Hey, if you're good at sucking then go for it. We loves the guy's costume though, thumbs up for that!

2) Brittany and Her Beer Bong

I am sorry to disappoint but Brittany doesn't get it in the face, she simply just can't swallow (2 puns in one). This may have been down to the lack of information given to her, but then again, it's not rocket science.

Everyone knows the rule of closing the off value if you cannot finish, it's just polite. Thankfully the girl with the curls was there.

Beer bongs work by allowing gravity to do the work, but when you want to make gravity your bitch you simply add 40 psi of pressure. But remember: Gravity isn't just a good idea, it's the law!

5) Ginger Guy and His Beer Bong

The original title of this video was "Long Haired Ginger Pussay" and the description read "Some queer trying to be hard... but he's a lil bitch." Brilliant! That's all we are saying.

6) One Man and His Beer Bong

Never blow into a beer bong. What did you just say...why? Well, try it and find out. As you can see by the video, the guy laughs half way through. There should be a rule of being serious until the beer bong is complete.

If you fail on your own accord then it isn't too bad, but when your bro has one job of just holding the beer bong and fails then it's a different matter.

So, you haven't got a beer bong and you simply can't be asked to make one (obviously way too much effort), so what do you do? You use your guttering that's what. Brings a whole new meaning to the word ghetto doesn't it!

A beer bong loaded with 6 full beers had fail written all over it, but for $100 the guy with the straw hat gave it a good go. He should probably stick to just the one beer. We thought at one point his friend was going to show him how it was done - now that would have been epic.

Shaun, the birthday boy gets off to a great start. Not only does he successfully finish the beer in his bong, but he doesn't need a friend to hold it for him - what a champ! But then...puke everywhere! This wasn't down to the beer itself, it was due to the amount of liquid he had in his body.