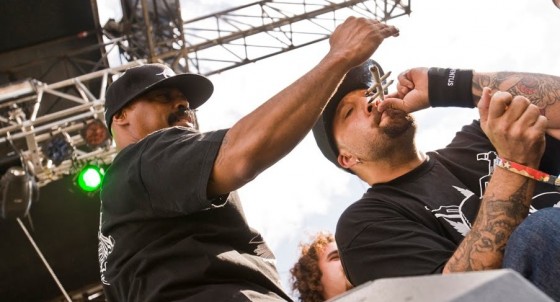 It’s no secret that many musicians smoke up. Hell, some even get high on stage, if they weren’t already high before the show. Marijuana has permeated almost every aspect of popular music for decades, and below we have ten great examples.

Afroman – Because I Got High

After years of fully self-produced comedy albums, Afroman finally got his big hit with “Because I Got High,” which ironically gives a little insight into the downside of weed!

No one doubts that Tom Petty loves his weed. He wrote plenty of stoner anthems, with varying degrees of obviousness. For Last Dance with Mary Jane, the title says it all. Also check out You Don’t Know How It Feels.

Dr. Dre – The Next Episode

Almost every Dr. Dre song gives a shout out to weed, so why does The Next Episode make the list? Just listen to Nate Dogg’s great closing line, “Smoke Weed Everyday.”

How many Bob Marley songs could be put on this list? It’s hard to choose just one, but we have to go with Easy Skankin’, the song that may have introduced the world to the word “spliff.”

Cypress Hill – I Wanna Get High

Cypress Hill made a career out of weed songs. Songs like I Wanna Get High and Hits from the Bong, with their trippy production, ensures the inclusion of Cypress Hill on every list about music and weed.

Peter Tosh was always a little more direct than Bob Marley. True to form, he leaves all subtlety behind in his classic protest song Legalize It.

In case you were wondering about Ozzy’s opinion of weed, Sweet Leaf will set your mind at ease. It is a straight-up love letter to weed and its benefits.

This Dr. Dre produced party anthem nicely sums up the philosophy of Snoop – roll down the street, smoke endo, sip on Gin and Juice.

Unlike the poetic drug references in Mr. Tambourine Man, in Rainy Day Women No. 12 & 35 Bob Dylan bitch-slaps you with the message, “Everybody must get stoned!”