The future is a bright, shiny penny of possibilities and if science fiction is to be believed, technological wonders and convenience will be waiting around every corner, not to mention hot aliens and robots to clean up all our messes. It’ll be the lazy deviant’s paradise. But alas, sci-fi is such a dreamer it never brings its head out of the clouds long enough to ponder some of the myriad ways mankind, as a whole, can screw up all the wonders that await us. So let’s do that. 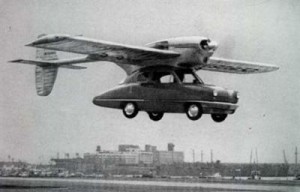 Never mind the logistical issues with this idea, things like fuel and propulsion or the infrastructure necessary to make sky roads. The problem with flying cars comes down to a simple issue that can be expressed as a mathematical equation thusly:

Where X = flying cars, Y = morons behind the wheel, Z = all the future casualties below and $#!t = shit, as in the horrible shitstorm waiting to literally fall on mankind. People can barely manage driving in 2 dimensions, a 3rd one is like giving chimps sling blades and sending them into public schools. People talk on the phone, they eat, they get road head and they run into trees. Add in the terminal velocity that will be included when those same idiots get airborne and suck a pigeon into an exhaust fan and we have a problem. Then toss in everyone who runs out of gas or decided not to worry about getting the carburetor fixed and flying cars basically become steel wrapped meat bombs raining down like a monsoon. 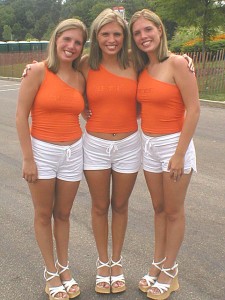 Star Trek, perhaps through lazy writing, popularized the idea of a machine that could just make whatever shit you wanted simply by requesting it. Rarely, if ever, was this idea exploited as it so obviously would be in real life, because in the Star Trek universe, humans have no actual human traits like greed or laziness. Other species do and why it’s never mentioned why the greedy races just don’t use replicators to get what they want is anyone’s guess. Regardless, back here on Earth, you can bet your ass that we’d all pretty much never leave the house again if these things existed. Free Cheetos, free tang, free wet naps and flavored lubricants. Why do anything? Need money to pay your bills? Replicate your ass some gold, devalue the dollar, destroy the economy totally and watch the world fall into chaos because someone invented the genie machine. 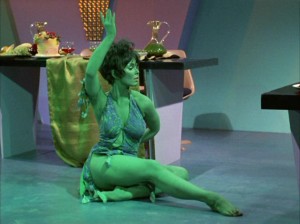 If there’s one thing humankind is known for it’s tolerance. Except for how the exact opposite is true. A sure-fire way to get a bug in someone’s ass, other than with a speculum and generous amounts of lubricant is to present to them something they find unnatural. While Star Trek would have us believe Captain Kirk was getting his dick wet in anything that looked like it had a free hole across the universe, the truth is he’d be ostracized from the word go and would most likely have to warn people if he moved into their neighborhoods. There are portions of the world still uncomfortable with interracial couples, let alone interspecies couples. Maybe in time banging your Venusian girlfriend will be as cool as breastfeeding in public but at first, let’s be reasonable, you’d be giving everyone the creeps. Should the day ever come when we make contact with another species and you get friendly, make sure you drive him, her or it out to a secluded spot to see if it has any friendly orifices. 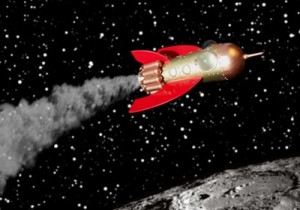 Humans colonizing space is a popular idea. After all we already spread like herpes across the Earth, surely space is next. The problem with this idea, however, is inherent human laziness. Have you ever gone to visit the inlaws? Grandma? Your lazy-eyed cousin who finally got his own place that stinks of cured meats? The only thing worse than being there is going there. Who the fuck wants to commute to Mars? Despite all the kick ass futuristic shit that’d be there at first, as soon as everyone realized that Mars is the galactic equivalent of a highway rest stop, only the most desperately pathetic people would ever want to spend time there. Emo kids needing solitude and pretentious artsy types who want someplace to think. Mars would become a community college campus in no time. 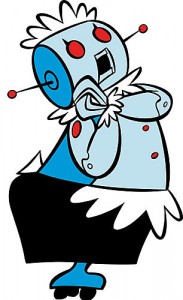 Sci Fi has assured us that we will have robot servants one day and that they will hate the shit out of us and kill us to a greater or lesser degree, depending on which film or book you choose to believe. That, in and of itself, is obviously a concern. But that’s not the only problem with artificially intelligent day labor. The real problem is people. People have already shown an unnatural attachment to their Roomba vacuums, those little robot vacuums that putter around your house sucking up crap. When the day comes that we have walking, talking, thinking robots wandering around the house cooking meals and wiping our asses for us, it’s going to take all of 2 minutes for someone to decide “Hey robot, I wanna fuck you.” And then it’s all downhill from there. That may sound sick but you damn well know it’s true. About 10 minutes after that we, as a society, have to deal with robot girlfriends, robot spouses and people who want to free the poor robots to run free in their natural habitat, which is probably a scrap yard or some such. 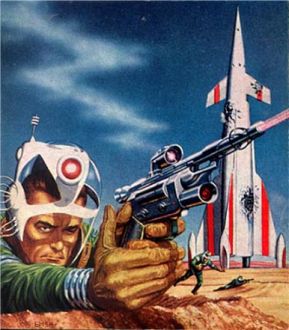 An intergalactic team of ruffnecks seems like a grand way to defend the galaxy against alien invaders. Send in the grunts to storm some silicon beaches on a Krypton atmosphere planet full of filthy bug men who need a dose of human ass kicking so they stop laying their eggs in our celebrities’ brains. The problem with that is what we can witness in the here and now any time troops from pretty much any country need to be deployed overseas. Things gets out of hand. Troops starts doing crazy shit like stacking POW’s on top of each other and fisting them on camera, someone forgets to send ammo or gear that can withstand a beating from a broomstick, Sgt. Pepper gets a letter from his wife saying she’s banging the neighbor and the Fightin’ Aces get lost in the desert for 3 weeks and have to drink their own piss to stay alive. Does anyone really want to do that 6 light years from home? 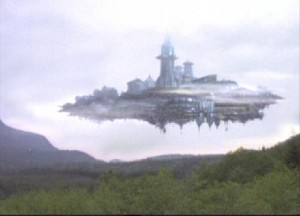 Lando Calrissian was a pretty bad ass dude, and not just because of all that Colt 45. The man ran a city that just kind of floated in the sky and seemed to be some sort of long time ago, far far away Vegas. Star Trek too had a floating city pop up and even Jonathan Swift had one in Gulliver’s Travels. The idea seems fun and cool at a glance but the potential for something to go horribly awry is pretty much everywhere.

People can’t climb the Empire State Building without wanting to throw off a penny or a used condom. If people lived in a cloud city, they’d be hucking shit out the windows all the time. Pop cans, diapers, used up porn, it’d all be raining on the poor saps below. Worse, as Luke Skywalker showed us, these things are full of holes. Maybe that’s a design flaw, but when your balcony hangs out over a 50,000 foot drop into God knows what, the chance for bad things to happen is astronomical. Some drunk wandering home after a night of debauchery takes a wrong turn in an effort to find a dumpster to piss on and spends his last vertigo-addled moments wondering why it’s so windy all of a sudden. 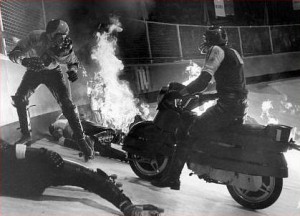 The future may possibly see the world united under a banner of peace in which conflicts are settled in a more civilized manner than war. Teams from the opposing sides strap on roller skates and try to kill each other while playing what looks suspiciously like Quidditch without brooms. Or maybe they forgo the roller skates and just let Schwarzenegger run free while Richard Dawson macks on some tang in the studio audience. Whatever. Point is, killing people for entertainment seems to be what the future has in store for us.

While this idea likes to believe humans are a blood thirsty lot whose lust can only be sated by the most extreme contests ever for the purpose of cheap thrills, the fact that only 5% of people who possess a full mouthful of their own teeth can be convinced to watch any “sport” that currently takes place on wheels takes some wind from this idea’s sails. That, and a big part of sport is playability and merchandising. Your sport is going nowhere if dad takes the kids out to the rink to play a round and ends up decapitated. And if you can’t have a star player due to remarkable mortality rates, who the hell is going to sell your shoes? Who’s endorsing the Gatorade? Who’s being fined for using league resources to film amateur porn? 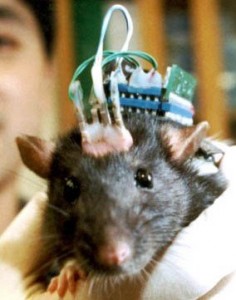 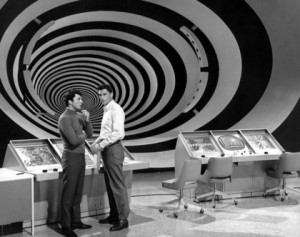 The idea of going back in time to hunt a dinosaur or going forward in time to hunt your own great grandchildren has been a staple of sci-fi for ages. H.G. Wells wrote The Time Machine in the 1800’s and don’t think for a second he didn’t consider how awesome it’d be to take a book of matches back into the caveman days to awe them all, become a living God and defiling their women.

All time travel stories warn us that if we go back and mess around we’ll destroy the space/time continuum. Pee in one Victorian era haberdasher’s soup bowl and you may negate the founding of the United States. That’s exactly why Marty McFly didn’t bang his mom. But by the same token, if it ever became a viable form of technology, not even the government could close Pandora’s box and stop some dude from making one in his garage and figuring it couldn’t hurt too badly to go back to ancient Egypt with a laser pointer, a shotgun and a Casio keyboard to loot every single ounce of gold in the place. Then, before you know it, all of us are living under the rule of the Kingdom of France, TV was never invented and everyone eats food in suppository form. Even Doc Brown couldn’t fix that mess.