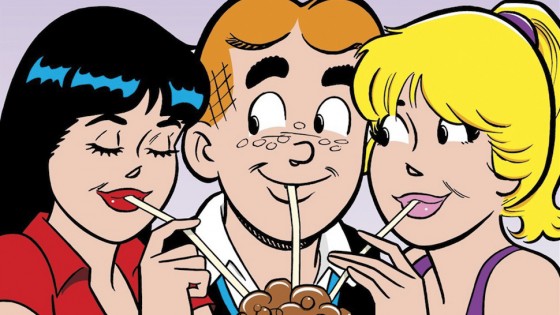 These days, there aren’t many comic books that don’t have hyper-muscled, tight-wearing dudes beating each other up. Superheroes reign supreme on the comics stands. But it wasn’t always that way. Years ago, there were comics in every conceivable genre. Horror, Western, War stories. All shared top billing with the guys in capes. Perhaps most surprising to our jaded, modern sensibilities, romance comics were also really popular.

Aimed at teenage girls, young female professionals and creepy old guys, thousands of romance titles flew from the shelves and into the hands of a generation looking for true love. With their lurid, sexual, and titillating covers, romance comics trafficked in the  pulpy, misty stories of unfettered passion, doomed love, and tragic heartbreaks. Plus, they were really, really stupid. In honor of Valentine’s Day approaching, we thought it would be fun to look at a few examples of the best/worst of the era.

Don’t worry too much Millie, they are gay pages after all. And, really. That Archie wannabe isn’t fooling anyone with that bow tie and sweater vest.

Getting it on with your girlfriend’s sister when she’s in the same room? That’s cold, dude.

It’s either the shotgun or the anachronistic torpedo bra.

Her ‘first romance’ is keeping an entire bus waiting while she plays tonsil hockey across a lunch counter with some random soda jerk at some truck stop in the middle of nowhere?

That’s what you get for yelling your marriage proposal over the phone.

Wouldn’t you be more worried that your boyfriend was hallucinating his dead ex-girlfriend?

And a wicked ass case of jaundice.

Is spreading your legs for everyone at the skating pond to see any way for America’s Sweetheart to act?

She’s arrived, but she hasn’t come as yet, if you catch my drift!”

And the guy in the back is thinking, “Fools! The only reason I agreed to be the best man was for the free meal.”

One look in the background and she should have known this was a crazy scene. Note for all the young girls out there, if you go to a party where people are drinking soda, wearing neckerchiefs, and listening to “Sweet Daddy Rock,” get the hell out of there.

Maybe she isn’t thinking about money and business and corporate mergers and maximizing profits while minimizing expenditures, but at least she’s been in love! Can you say the same thing you cold-hearted bitch? Just because you married some fossil for his bank account and a mink coat doesn’t mean this young girl can’t dream of true love with a handsome guy in a dinner jacket! Read the banner. This is the “magazine of youth and love,” not “fading beauty and sour regret.”

We both know the answer to that question baby.