The 15 Bloodiest Horror Movies Ever 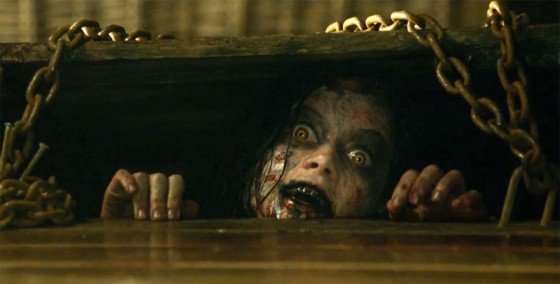 A successful bloody horror movie needs to include at least two of the above but mostly, it has to be bloody. It has to be disgusting to the point where you might have to excuse yourself from the room to toss up that late dinner you thought would be a good idea to eat before the show.

The acting doesn’t have to be anything short of mediocre but the blood has to be shipped in by the truck load. Below is our list of the fifteen bloodiest horror movies ever, including video segments or trailers from each. Obviously most of these clips are going to be graphic, so watch at your own peril.

The final few scenes of Carrie feature more blood than almost any movie on this list when it comes to a per scene average. In the original 1976 version, they used karo syrup and food coloring as the pig’s blood that was poured onto Sissy Spacek’s head. But it is also known that she was willing to have real blood poured on her for the scene to keep the authenticity of her character.

Regardless of which version of The Hills have Eyes that you watch, the 1977 version or the 2006 one, this movie ranks as one of the creepiest horror movies ever. And although the amount of blood used isn’t worthy of a top five ranking, it is about as disgustingly morbid as a horror movie can be without being banned.

From a horror movie fan perspective, this movie wasn’t that great. In fact, it was terrible. However, it used enough blood and had enough gore to climb into the rankings of bloodiest horror film ever. It is said that they used around 300 gallons of fake blood for this film. Not too shabby.

The only scene it took for us to add The Descent to the list was the pool of blood scene in which Sarah, played by Shauna MacDonald, falls into one of the sickest looking blood pools in cinema history. And by sickest, we mean amazing.

Stanley Kubrick is one of the greatest director’s of all time. He was a bit on the OCD side and needed everything to be perfect before moving on to the next scene. Needless to say, the bloodiest scene of the movie, the elevators full of blood, took almost a year to shoot. Although they only shot it three times. It took nine days to prepare for the few seconds it took to film it.

Scream used only 50 gallons of blood for the entire film but it didn’t make the list based solely on the amount used, it was also the combination of how it was used. Scream found a way to use blood in more scenes than the usual horror film of its time.

This movie was not just bloody, it was creepy. It was about a young girl looking for revenge for her kidnapping as a child. After that, we have no idea what is going on but it is full of blood, guts, and gore.

There aren’t too many horror movies that feature such a disgustingly scary flesh eating disease that was first transferred during sex. Actually, we can’t remember any horror movie that featured a deadly STD like Cabin Fever but that is what made this movie so bloodily awesome.

Of all the iconic horror movie villains, Freddy Krueger is easily the biggest of the rest. Everyone remembers the famous child murderer that terrorized people in their dreams, right? And those hand claws?

Rob Zombie decided to make a horror film, and it was epic. Not only is this one of our favorite movies ever, it is one of the sickest, bloodiest, sadistic, and creepiest horror flicks to date. If that wasn’t enough, they ended up making a sequel that wasn’t as bloody but it was just as disgusting.

When it comes to disgusting, Cannibal Holocaust is about as gross as it gets. We had to watch this film to be able to justify a reason for this movie making the list as one of the bloodiest of all time but after sitting through this flick, we aren’t sure if we should even be talking about it anymore.

Torture. It is the one thing we hate to watch but can’t stop looking away. Hostel doesn’t just torture people for a cause, it is for no reason other than the entertainment of others. And if you didn’t expect this kind of torture film to be bloody, you must be at the wrong website.

Instead of just listing all the Saw movies on the list, we have combined the series into one because no one wants to read about seven Saw movies and how each one was bloodier than the last. As a collection, this series is about the bloodiest horror series of all time.

Before the Lord of the Rings, there was Dead Alive. Peter Jackson made this movie and it has forever been known as the bloodiest horror movie of all time. That is, until 2013 and the remake of one of the best horror movies ever was released…

Evil Dead will forever be known as a classically perfect horror movie. The original was absolutely terrifying and disgustingly awesome. The amount of blood used in the 1981 film was nothing compared to the 2013 version where they used 50,000 gallons of fake blood to film one scene. To give you perspective, a large underground pool uses roughly 39,000 gallons. So yeah, it was THAT much blood.