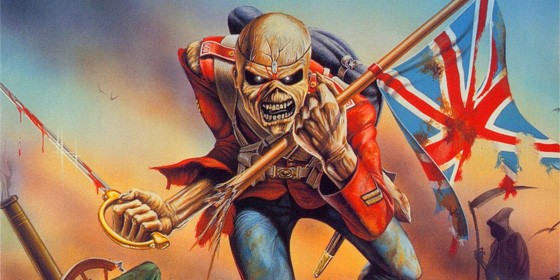 Band monikers can range from sublime to ridiculous. Take The Beatles for instance. Is that a cool name for the greatest foursome in the history of rock/pop? Not really. It’s memorable, but for Pete’s sake, they’re named after insects. Just imagine if they were “The Frogs” or “The Pigeons.” Kinda stupid, huh? Of course if the guys and or gals can play it makes no difference what they’re called.

Some bands choose to go the intimidating route when selecting a handle. This usually applies to hard rock, heavy metal and speed metal groups, but any genre of music can adopt a foreboding label. The following 15 musical gangs fall into the category of ominous. For the most part, we decided to keep this list limited to famous bands. We may know who Cannibal Corpse is, but that doesn’t mean Joe Lunch Box and Bob Business Suit does. However, a couple were just too damn wicked to exclude. Also, they are not ranked in order of industry success, but rather the deadliness of their names.

If you find yourself in dire straits, you’re in a world of hurt. The kind of mess that could get you killed. Nobody wants that. Luckily, Mark Knopfler and Co. created a catalog of music that is pretty darn good.

If you’ve ever spent time in an arcade, you know it’s hardly the setting for a five-alarm blaze. A small, confined space packed with kids and geeks. You’re asking for a bunch of crispy corpses. Anyone on the verge of a Donkey Kong kill screen isn’t about leave just because of some stupid fire.

Death by itself really sucks, but MEGA death has got to be all kinds of painful. Making it extra spooky is the fact that death is spelled “deth.” Either Dave Mustaine is illiterate, or he’s pure evil. We’re thinking the latter.

What the fuck is Alice doing in chains? Was she bad? Is it a sex thing? Are we looking at a serial killer who likes to kidnap chicks named Alice and shackle them up before savagely murdering them? We need answers.

Ever eat rancid meat? Rest assured, it’s not too appetizing. Anything rancid is downright offensive. It smells like shit and is in general very uncool. Like when a mouse dies in the wall and you have to sit there and wait for it to fully decompose before the foul odor dissipates. Yuck.

Suppose someone tells you they’re going to stage a massive attack on your face. Might get the lil’ hairs on you arms and neck to stand at attention. The military’s idea of a massive attack doesn’t involve smoke grenades and rubber bullets. It’s all about destruction.

Let’s say you’re cutie climbed into a death cab. Unless you hate her stinking guts, you’d probably be a bit worried. Is a death cab anything like a rape van? If so, you don’t want your cutie anywhere near that thing, no matter how cheap the fare.

If you have suicidal tendencies, therapy might be something to consider. Life is full of pain and disappointment, but eating pills or a shotgun barrel isn’t the answer. Besides, you’ll look like a silly goose when the cleaning lady stumbles upon your lifeless remains.

No, not Buffy. This Slayer isn’t near as pretty. At any rate, a slayer is all about slaying and killing and blood and death, which is all fine and dandy, unless you’re in line to be the next victim. We wouldn’t feel comfortable hanging with slayers. They seem like they’d have short fuses.

Anyway you slice it, poison is bad news. Be it downing a bottle of Drano or getting bitten by a Black Mamba, the results will not be particularly satisfying. There’s a very sane reason why a skull and crossbones symbolizes poison. It’ll kill ya! (Just like the band’s awful music.)

Whether you acknowledge Saturday or Sunday as the Sabbath, a black Sabbath reeks of the Devil’s handiwork. It’s meant to be a day of rest and remembrance; a day to chill with the Lord. A giant black cloud parked overhead could put a serious damper on your plans.

Have you seen an actual iron maiden? Damn thing will make your skin crawl. What with all those pointy steel spikes just waiting to pierce your supple skin. Blood is crucial to life. Keeping it inside the body is advisable.

This really doesn’t require an explanation. Killers. C’mon, people! We would prefer The Pacifists. Those clowns are much easier to beat up. Ya know, cause they won’t fight back. Wussies.

Yikes! When something is the weapon of choice by terrorists, it’s gotta be nasty. Inhaling these deadly spores will do more than make you sneeze. Makes us wanna slip on one of those creepy masks all the Asians like to wear.

We debated, but Napalm Death, although not immensely famous, had to make the cut and top the list. Why? Because after viewing archive news footage from the Vietnam War we determined that death by napalm is most unpleasant, not to mention terrifying. Again, we’re not ranking the band’s musical abilities. It’s all about the names.