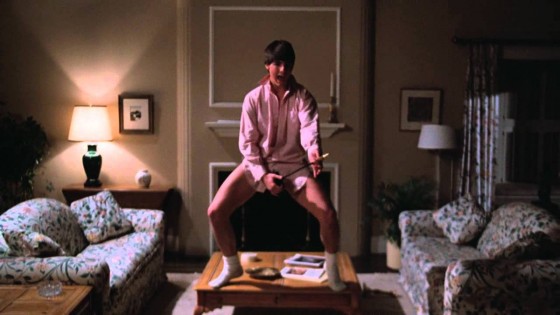 During the ’80s, movies began to heavily feature songs on their soundtracks. Tentpole blockbusters, teenage coming of age flicks and groundbreaking comedies all incorporated mainstream pop into their productions. The strategy was so effective that some artists saw their songs top the charts due to the extra exposure on the big screen. In fact, if not for their use in films, most of these musical offerings would’ve become footnotes instead of hits. Each of the following tunes will be forever linked to the movies they appeared in. This is by no means a definitive list, but here are 15 songs we feel helped define movies in the ’80s. Feel free to bash us for leaving out “Cruel Summer” from The Karate Kid or another winner we omitted.

The Bangles were all the rage in the mid ’80s. “A Hazy Shade of Winter” perfectly kicks off a movie about rich Beverly Hills college kids addicted to money, excess and drugs.

Sports movies must have a theme song if no other reason than to have it playing behind the ubiquitous montage. “Lunatic Fringe” by Red Rider fits the bill as wrestler Louden Swain trains for the wrestling match of his life.

This stupid jingle gave Ray Parker Jr. a career. It was campy, but also very addictive. Who wasn’t singing it back in ’84? The answer: nobody.

This odd little tune by Swiss electronica band Yellow was so popular it was also featured in Planes, Trains and Automobiles and Secret of My Success. If that’s not an ’80s theme, then I don’t know what is.

11) Fight the Power – Do the Right Thing

10) Everybody Wants to Rule the World – Real Genius

Tears for Fears songs were prevalent during the decade. In a movie about teenage geniuses inventing groundbreaking technology, “Everybody Wants to Rule the World” was the only choice to roll over the end credits.

9) We Got the Beat – Fast Times at Ridgemont High

The quintessential ’80s high school movie needed a kick-ass intro. “We Got the Beat” by the all female Go-Go’s did the trick. It’s hard not to sing along when this catchy number graces airwaves.

You could go with the other Huey Lewis and the News track “Power of Love” here too, but “Back in Time” would become the anthem to one of the most successful trilogies in the history of film.

Survivor was a struggling rock band until they penned the theme for Sylvester Stallone’s third Rocky movie. “Eye of the Tiger” would win a Grammy and be nominated for an Oscar. Needless to say, it was Survivor’s biggest hit.

6) What a Feeling – Flashdance

The whole movie plays like one long music video thanks in large part to Irene Cara’s smash hit “What a Feeling.” Jennifer Beals in a sexy leotard was enough, but coupling her with this song made her unforgettable.

The most famous gopher in the world got his groove on to “I’m Alright” in an opening credit sequence that signaled the start to arguably the best comedy of the decade.

Once John Cuzack held up his boom box and blasted “In Your Eyes,” Cameron Crowe’s Say Anything cemented its place in the annals of great teen dramadies.

A Saturday detention turned into a life-affirming lesson about friendship in the hands of ’80s wunderkind writer/director John Hughes. One thing is certain: no one who’s seen The Breakfast Club will ever forget it or “Don’t You” by Simple Minds.

One of the decade’s biggest blockbusters had a little bit of everything: buff bodies, fast motorcycles, faster jets and a rousing intro song by Kenny Loggins. Entering a “Danger Zone” has never been so much fun.

This Tom Cruise guy had a pretty good decade, huh? If his tighty whities living room song and dance routine isn’t the most iconic scene from the ’80s, it’s definitely in the top three. It pretty much put Mr. Cruise on the map, with assistance from Bog Seger.