Right off the bat, let me admit the following: I am by no means a Kool-Aid connoisseur. In fact, to be perfectly honest, having grown up on the stuff… I don’t even really like it all that much. I know, I know… and I’m sorry.

So, as such, I will not be giving an all-out run down of each flavor, instead, it’s a look into a bit of exhaustive research locating these fifteen of the finest Kool-Aid mixes that have either faded into non-existence, or else are just extremely difficult to locate. So, to all of you Kool-Aid lovers out there, this one is for you! Drink up! 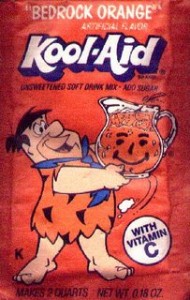 I can safely say I have never had this flavor. But, if I can assume by the packet, it’s orange hocked by Fred Flintstone. Is it me or does Fred look like he’s just about to go crazy guzzling down that pitcher? Would that leave Kool-Aid Man lifeless and empty? Yes… yes it would. 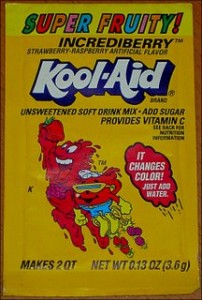 Now I know I’ve had this. Strawberry, Raspberry, and Cherry are the three biggest ‘red trinity’ flavors that Kool-Aid offers and all other combinations seem to branch from them. This flavor pairs up two of them with no other bells and whistles. If you like red, this is probably your flavor. That ‘Juice Monster’ kinda scares me little, too, especially if he ‘changes color in water’. 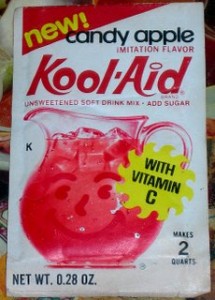 If it weren’t for the eye-catching ‘imitation flavor’ insignia, I’d have assumed this to be apple and caramel… but now I’m not so sure. I’m pretty positive I probably had this as a kid, what with my grandmother and mom stocking their collective pantries with the elixir, but I sadly don’t recall.

If this tasted anything like those little root beer barrel candies, I think I’m going to have to pass. There’s just something about that fake, almost plastic pseudo-root beer flavoring that makes me want to shout at my shoes. 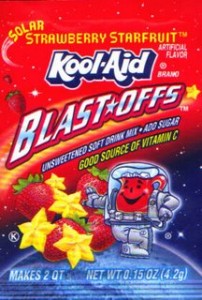 This marks one of two different ‘Blast*Offs’ I discovered and I have to say, I am intrigued by the star fruit. You just don’t see that weird little guy in many drink mixes like this. Sure, it’s in a lot of the more up-scale beverages in the seven-dollar glass jugs, but it just surprises me that Kool-Aid had the wherewithal to include it in a powdered, artificially-flavored, drink mix. Oh, wait, that’s the ticket right there… 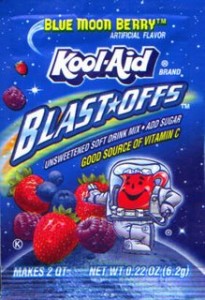 See what I mean about one of the big ‘Three Reds’ leading the pack? And look, another of the trinity is in there, too! And check out the third flavor back there: blueberry. Hmm… it’s not that I have anything against the blueberry personally, it’s just that it doesn’t remind me of a fruit that could lend its subtle flavor to a Kool-Aid with two powerhouse ‘Red’ flavors up front. Maybe I’m reading too much into this. 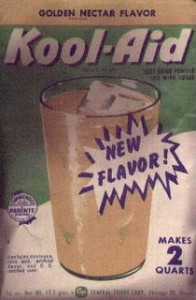 Sweet Mother Mary, I have no idea what this flavor is, but I want it! Anything with the word ‘nectar’ in it makes me salivate! It could say Pork Nectar and feature a suckling pig on the packet and I’d still want to try it. Even the color -especially since I’m color blind- looks enticing! Man, someone find me some of this! 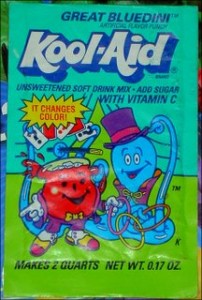 Man, can you imagine a magician that also happens to be an octopus? He’d mess you up with sleight of hands! HA! Anyway, this flavor is a punch style, so it’s a blend, and it’s also one of the Kool-Aid Man’s ‘friend’ packs. They were really popular in the 90’s but have since disappeared from many store’s shelves. 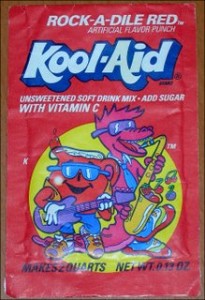 According to the Rock-A-Dile’s sax, this was a Strawberry/Cherry/Blueberry punch… and it was good. I remember loving this flavor when I was a bit younger mostly because it reminded me of actual punch. Also because we used it to make Jungle Juice -um, as an adult, not a youth, that’d be illegal. Inquire within. 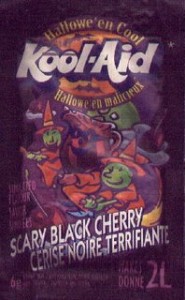 One of Kool-Aid Man’s holiday-themed flavors in the innocuous ‘Black Cherry’. Nothing to vague about that, I’d say, and I’d also say that I have very much enjoyed this flavor in the past. I love black cherry with all its tartness and less overpowering sweetness. This was a favorite of mine. 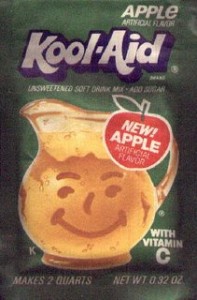 Apple Kool-Aid. I had to put this so high on the list because it’s so low on my desired flavors collection. I mean, goodness, Apple? I can almost feel its cloying, sickeningly-sweet apple juiciness flooding my poor mouth. I wouldn’t drink this much in the same way I wouldn’t drink Apple Juice. Yucky. 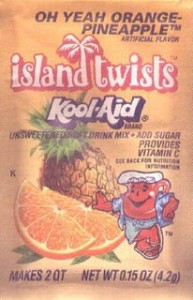 A representative from the varied supply of ‘Island Twists’ flavors and one I happen to remember fondly. Orange and Pineapple combined is one of nature’s great pairings and I would drink this even now… maybe with a shot of rum for that Island-y thing there. Oh wait, I hate rum. Oh well, in another life maybe.

Look at the shades on the sweet shark! I think, just as this anthropomorphic pitcher is illustrating, I’d like to leap in the ocean and ride a shark! Let’s go! Also, I have no idea what flavor this really was since my rememberer is in the shop. It offers no clues on the package other than ‘It’s Pink’ and ‘Punch’, so that could really be anything. This flavor has actually been brought back recently, so you might be able to find it. 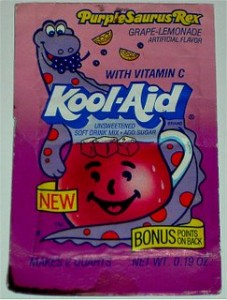 Proudly held aloft as one of Kool-Aid fan’s favorite flavors, comes the PurpleSaurus Rex! And, just as it clearly announced on the top, it’s a Grape Lemonade, and to me, sorry, but that sounds wretched. I think it’s because I’m no fan of fake grape flavored anything, yet, such as it is, I thoroughly enjoy grape juice. I don’t know, I guess my physiology is all wacky. Anyway, the only good reason behind the number two placement of this one is that number one is held by one of the most difficult to find flavors of all time…

Apparently, it tingles in your mouth. Yum. This is one of those flavors that isn’t so much old as it is rare. Evidently the production was cut shorter than most and, though I understand a few places still offer it, it is rather tough to get a hold of. They made a few of the ‘Ice Cool’ flavors and I guess this one just wasn’t as popular at the time, I really don’t know for sure. I do know it’s sour apple and I would so drink that… probably. And look, it turns color! Now that IS fun!