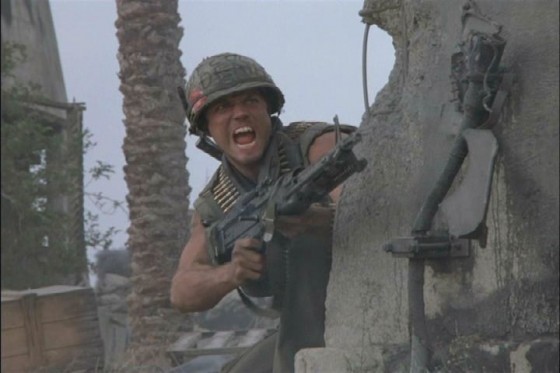 It’s hard not to like a good war movie. Action, intrigue, high body counts, lots of gunplay, a moral of some sort. They got it all. One of the most vital ingredients to making successful combat cinema is reserving at least one character to be a soldier that crushes. The guy who displays little to no fear, is mean as a snake and single-handedly wipes out a significant number of the enemy. These military mavens can take a beating and just as easily dish one out. Using the year 1979 as a starting point, here are sixteen badass movie soldiers from the last thirty-five years.

This Aliens-type horror flick pits a crack unit of British soldiers versus a family of bloodthirsty werewolves. Most of the dudes kick serious butt at one time or another, but Spoon is the toughest of the tough. Anyone who willingly chooses to box an eight-foot wolfman deserves a spot on this list.

Snipers in war films have a tendency to be cool as shit. Anyone who can drop a human target from 500 yards away should be both feared and respected. Jackson, played by Barry Pepper, is deadly with a WWII era rifle. If you find yourself in his sights, it’s goodnight Irene.

Denzel Washington nabbed his first Oscar playing the rebellious Private Trip. Not one to abide by rules, Trip eventually becomes a reliable and loyal member of the 54th Massachusetts Volunteer Infantry. Watching him endure a brutal lashing from a bullwhip is painful.

Rasczak is your typical no guts, no glory combat leader. He walks the walk and talks the talk. Lop off one of his arms. Big deal. Stick a giant bug leg through his chest. He’ll keep on fighting. Johnny Rico may have been the star of the show, but Rasczak was the badass.

Whether battling in a post apocalyptic future, or the pop-culture obsessed modern day, Kyle Reese is a soldier to the death. If you need a guy to selflessly sacrifice himself for the betterment of mankind, he’s the pick. How many guys can hold off a Terminator by themselves for an entire movie?

Leo DiCaprio kills it in this underrated actioner. Archer is deadened by the horrors he has seen and committed throughout his violent life. On the surface he’s a selfish prick, but deep down he knows the difference between right and wrong. The perfect anti-hero, Archer is relentless and cold-blooded when necessary.

Bruce Willis put aside his normal smartass tough guy persona to play the quiet cool Special-Ops commander, Lt. A.K. Waters. Loyal to the uniform, Waters rejects his orders to save innocent refugees from a ruthless dictator. He realizes the consequences of his actions, but does them anyway, like a true badass.

Jessep may never brandish his weapon or see the field of battle in A Few Good Men, but he is still one bad muthafu**er. A hardened by the books Marine Colonel, he bleeds for the Corps and lives by the code. This is one of Jack Nicholson’s scariest and best performances.

Animal Mother is one badass name for a soldier. Giving him an M-60 machine gun to shred VC with is really badass. Daniel Baldwin plays him as a dude who really gets off on war. If anyone was “born to kill” it would be the Animal Mother.

Hoot gets it. War is an effing nightmare, but you do whatever it takes to survive. It takes a special breed to sign up for a trip to hell. Hoot doesn’t care what outsiders think about what he does. He’s too busy sneaking up on “skinnies” and putting a bullet in their skull.

“Stay frosty.” Hicks does that very thing and manages to be the only Colonial Marine to make it off LV-426 alive. Scarred, but alive. Once he pulled out that pump shotgun and stuck it down the throat of an acid-dripping alien, he entered the Badass Soldier Hall of Fame.

Gotta have an Ah-nold flick on the list. Dutch goes toe-to-toe with a creature built to hunt and kill every living species in the cosmos. Forgetting the lame one-liners like “stick around,” Dutch delivers the goods while taking a serious amount of punishment.

The US Army doesn’t peg just anyone to assassinate one of their own. Willard has the skills and ruthlessness to carry out the mission. He stares down a tiger, shoots a young woman dead and covers himself in mud on his way to eliminating the out of control Colonel Kurtz.

Best. Gunnery Sergeant. Ever. Hartman was so damn good at his job he turned a doughy simpleton into a homicidal madman. He’s a badass who manufactures other badasses. Now that’s badass! Unfortunately for him, he wasn’t bulletproof.

Barnes is without argument one of the most evil incarnations ever to wear a uniform. He lives and breathes war, but multiple tours in the jungle has warped his sense of reality. In his eyes, everyone is the enemy. Crossing him is not advisable. Sick and twisted, Barnes is still one tough hombre.

He eats shit that would make a billy goat puke. He whacks guys with guns, knives, bows and his bare hands. He gets the assignments nobody else has the guts to attempt. He’s a borderline psychopath. Meet John Rambo — the King of Badass Movie Soldiers.