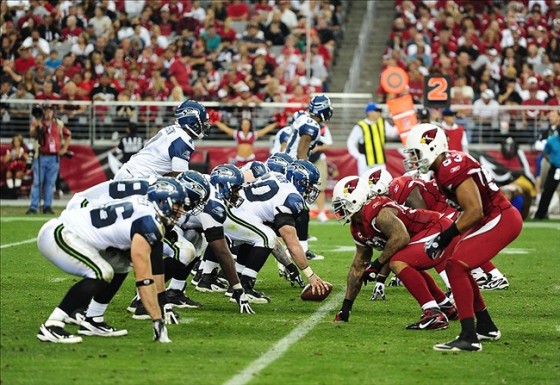 Yesterday the NFL unveiled its 2012 season schedule. Naturally, the pigskin pundits and talking heads swarmed like flies to roadkill to offer their detailed assessments. Which teams have a tough road? What are the best matchups? Who will be fired first, Norv Turner or Andy Reid? Nobody really knows, but it’s still fun to speculate. And since I’m not above speculating, here are 17 games — one for every week — on the 2012 NFL schedule worth watching.

Week 1: Seahawks at Cardinals – Matt Flynn or Tarvaris Jackson takes on either Kevin Kolb or John Skelton. The over/under for total passing yards is 160.

Week 4: Bears at Cowboys – Jay Cutler and Tony Romo account for nine turnovers in a 0-0 game at the end of regulation. Then Devin Hester returns the opening kickoff in overtime for a touchdown.

Week 8: Saints at Broncos – After a 1-5 start, the Saints name Drew Brees head coach. Inspired by the move, the Cajuns crush Denver 52-13 and remove Peyton Manning with a “cart-off” hit.

Week 10: Chargers at Bucs – Vinnie Jackson torches his old mates for 150 yards and a pair of touchdowns. Norv Turner refuses to answer questions about his job security.

Week 13: Steelers at Ravens – Joe Flacco once again lights up the Steelers. Fans and media alike are still in agreement that Flacco sucks.

Week 14: Lions at Packers – Detroit loses their third straight without Matthew Stafford, who is sidelined with a broken foot. Aaron Rodgers sports an anchor beard.

Week 15: Giants at Falcons – Atlanta blows out the defending champs 34-16 and once again lulls its fanbase into believing they won’t choke in the playoffs.

Week 16: Browns at Broncos – Cleveland loses their 13th game of the season. Discussions ramp up that the franchise should be permanently disbanded.

Week 17: Cardinals at 49ers – An Arizona win leads to an NFC West quagmire of four 7-9 teams. By virtue of tiebreakers, the Niners seize the division crown.