Media > Movies > 17 Films to Watch Over and Over

17 Films to Watch Over and Over 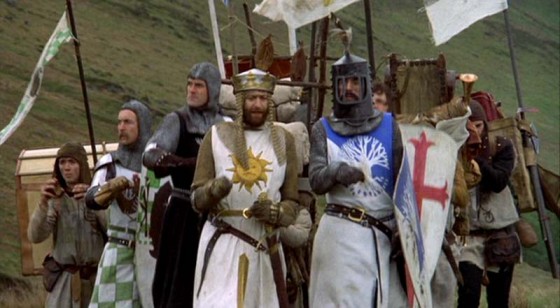 So, first of all, before I even begin rolling my eyes, I’m basically creating a response to this list from Entertainment Weekly: 17 Movies You Watch Over and Over. Look, it’s not like I don’t agree with a few of them (Princess Bride, Goodfellas, Shawshank), these are films that, regardless of how many times they’ve been on or if they’re on a station that has removed offensive scenes and words, I’ll still waste the better part of the rest of my day staring blankly at the screen. However, I think I can do better. There are so many more movies that garner rapt attention that this list completely ignores, and it’s a crying shame. To that end, I have gathered 17 (consistency, my friends) other flicks that everyone has seen hundreds of times and can scarcely ignore when they come across one on TV. Please, feel free to add your own to the comments, as this is doubtlessly an incomplete list and is more than likely going to piss some folks off. It is slightly personal, but not so much that these moves aren’t identifiable to nearly everyone for one reason or another. And yes, I did have fun with the roman numerals, now please enjoy our version, all on one page!

XVII
The Wizard of Oz

When I grew up, this was always on around Easter time and it was only on once a year. Now, however, you can find it aired throughout the year, most often in the fall/winter around the holidays. Call me crazy, but there’s just something so deliciously appealing about Dorothy with her innocuous flightiness that turns quickly into a forced adulthood as she becomes the one who must lead them all to sanctuary. Drug addled or not, she’s pretty damn cute.

Quote: [Tin Man mumbling] “Oiiiiilll Can…”
Scarecrow “Oil can what?”

Quite possibly (as proven by this list here) the most homoerotic film ever, and possibly because of it, this is one of those movies you just can’t help but watch no matter at which point you pick it up. Whether it’s the cocky duo of Maverick and Goose doing overtly sexual things, or the post-Goose death scenes, or the forced love between Cruise and McGillis that’s about as hot as a damp rag, it’s all familiar territory and drags you in each and every time.

Quote: Charlie: I’ll have what he’s having. Hemlock, is it?
Maverick: Ice water.

The entire movie -a road movie, of sorts- is an epic quest to reach not only the singular Walley World, but the all-encompassing ‘Family Vacation’ that we all strive for. When you channel past this one, you have little recourse but to double back just to see Chevy Chase slowly and methodically slip ever-so painfully into complete and utter insanity. And hey, the double dose of Beverly D’Angelo and Christie Brinkley is enough to hold your attention for a while, too.

Quote: Clark: Excuse me, could you please tell me how to get back on the express way?
Pimp: Fuck yo mama!
Clark: Thank you very much.

It’s the first, and, despite the fact that Empire is a superior film, it’s still the best. Sure, I’m a Star Wars fan, but it’s not like that’s a necessity to enjoy this movie. Watching Luke basically find his lot in life when he’s thrust into a Galaxy-wide war he had nothing to do with is so captivating that I will sit through this film each and every time its on as I have a hundred times previous. Classic, wonderful, and tasty eye-candy before eye-candy really caught on.

Quote: Luke: Boy, it’s lucky you have these compartments.
Han Solo: I use them for smuggling. I never thought I’d be smuggling myself in them. This is ridiculous.

Remember when Jim Carrey was a lunatic and everyone loved him for it? Remember when Jim Carrey didn’t try to expand his oeuvre and everyone loved him for it? Well, this is Jim at his very best partnered with Jeff Daniels as two of the most brainless idiots who swoon after luggage and Lauren Holly. You just can’t help but watch and giggle like a moron.

Quote: Harry: I thought the Rocky Mountains would be a little rockier than this.
Lloyd: Yeah, that John Denver is full of shit, man.

XII
An American Werewolf in London

David Naughton and Griffin Dunne are the hapless duo who find out what it’s really like to die and/or become a werewolf. Horror aspects aside, this really is a wonderful movie that explores the boundaries of friendship, love, and possibly the real need to listen to the locals when they tell you in no uncertain terms to stay the hell out of the Moors. A movie you can watch any time of year!

Quote: Jack: David, you are hurting my feelings!
David: Hurting your feelings? Has it occurred to you that it might be unsettling to see you arise from the grave to
visit me?

John Hughes made a slew of classics that could easily be watched a million times over and over and never get annoying (Home Alone, Sixteen Candles) but it’s the movie that everyone can identify with that takes place almost completely in a high school that really stands out as a a film you just can’t not watch. Though every ‘class’ of student is ultimately represented, it’s the lessons learned that make them more alike than they could ever rightly imagine during a regular school day. Also Ally Sheedy makes dandruff snow. Awesome.

There is absolutely no way not to sit, watch, and endlessly quote this movie whenever it’s on. And it’s on an awful lot. Giving Quentin Tarantino his opening to systematically take over the film making industry every few years or so, Pulp Fiction is that one movie that has a little bit for everyone and each bit alone is equal to the sum of its ass-backward parts. All I need is to see Eric Stoltz eating Fruit Brute and I’m sold.

Quote: Jimmie: I can’t believe this is the same car.
The Wolf: Well, let’s not start sucking each other’s dicks quite yet.

No, it’s not the most historically accurate account of the Arthurian Legends (I’m pretty sure they actually had horses), but it certainly is the most hysterically accurate! See what I did there? Anyway, beautiful sets, filthy peasants, witches, and Knights Who Say ‘Ni’… well, you’ve got yourself a perfect film to fill out an otherwise useless two hours. But no singing!

Yep. I know. Let it out. I can take it. Better? Good. Seriously though, can anyone honestly deny the appeal of Julie Andrews and Dick Van Dyke? It’s physically impossible! Oh, and there’s the songs, man! a Spoonful of Sugar, Supercali- ya know, that one… dancing penguin waiters?! For crimminy’s sake, it’s a damn masterpiece! Trust me: you’ll find Ed Wynn’s scene just as stupidly funny as I do. I guarantee it.

Quote: Bert: Bert’ll take care of you; like I was your own father. Now, who’s after you?
Jane: Father is.
Bert: What?

VII
Stand By Me

I’ll see your Stephen King classic, The Shawshank Redemption, prison movie extraordinaire, and raise you one dead body-filled, berry-pie barfing, Lollipop-singing, buddy pic called Stand By Me. It’s got Wil Wheaton, it’s got River Phoenix, it’s got Corey Feldman… shit it’s even got Kiefer Sutherland! But beyond all that, it’s a true-to-life emotional roller coaster. I’ve seen it a few dozen times.

Quote: Teddy: This is my age! I’m in the prime of my youth, and I’ll only be young once!
Chris: Yeah, but you’re gonna be stupid for the rest of your life.

You’ve got two options when combining such heavy hitters as Bill Murray, Dan Aykroyd, Rick Moranis, and Sigourney Weaver: either make a shit pile akin to Caddyshack II, or make the coolest poltergeist-fighting flick of all time and call it Ghostbusters. Fortunately -and obviously- this is an example of the latter. No matter how many times I’ve seen it (40 at last count) I still find a great quote to spend the rest of the day repeating.

Mel Brooks is a genius. Let’s just get that out of the way right now. And, in all actuality, you really could have any one of his classics fit the bill here (Blazing Saddles, Silent Movie, Spaceballs) but there’s just something about the way Young Frankenstein was filmed that just screams classic. From it’s grainy sepia-tones-on-black and white to it minimal score, and even that feeling you get when you laugh at every other line that the cast was just plain having fun. I could watch this movie all day long.

Yep. John Hughes again. It’s nigh on impossible to avoid this man’s contributions to modern cinema. But that’s OK because they’re just so damn good. This film marks the eventual life-long appeal for Matthew Broderick… well, before he married that foot-faced harpy, Sarah Jessica-Parker. This movie takes place in one day, and will pretty much take yours from you once you begin watching it again and again. Jeffrey Jones IS the ultimate antagonistic Principal.

Quote: Cameron: The 1961 Ferrari 250GT California. Less than a hundred were made. My father spent three years
restoring this car. It is his love, it is his passion.
Ferris: It is his fault he didn’t lock the garage.

III
Raiders of the Lost Ark

The first, and to many, the best of the Indiana Jones films, it also happens to fall between Temple and Crusade, actually. Anyway, the point is, this film is so epically scoped and perfectly filmed that it absolutely drags you in from the very first minute. As scores go, this also happens to have one of the finest ones, but the real treasure is when Indy grabs is whip preparing for a duel and that Williams tune strikes up, it just sends a shiver through you every time. I’m going to watch this one right now…

Quote: Indiana: You want to talk to God? Let’s go see him together, I’ve got nothing better to do.

II
The Sound of Music

Remember when I said way back at the opening that this list was to be ‘slightly personal’, yeah, well, this one’s for my ‘personal wife’ because I can’t stand this flick in any minute denomination. My wife, however, will stop channel surfing for good if this happens to be on. Now I’m not saying it’s a bad movie, but it kinda falls into that old idiom of ‘Either you’re and Elvis man or a Beatles man’ except in this case it’s either your a Wizard of Oz fan or a Sound of Music fan. I’m not a fan of this. Sorry.

Quote: Maria: Gretl, what happened to your finger?
Gretl: It got caught.
Maria: Caught in what?
Gretl: Friedrich’s teeth.

Though it’s number one on this particular list by no means makes it the greatest watch-a lot movie of all time. It just happens to fall into the top spot here, nothing more or less. Yet, it’s such a perfect movie to fail miserably at avoiding when it’s on TV. You just can’t do it. Mel Gibson and Danny Glover have nearly palpable chemistry and watching them become the inseparable and the best of friends throughout three more films is really fun. But it all started here in a film you just have to watch.

Quote: Roger Murtaugh: Have you ever met anybody you didn’t kill?
Martin Riggs: Well, I haven’t killed you yet.