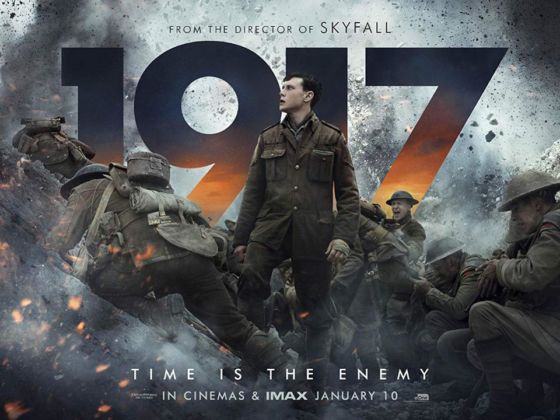 When a film carries the stamp of legendary cinematographer Roger Deakins, you know you’re in for something special. When you hear the latest film to bear his imprimatur is meant to look like it was shot by Deakins entirely in one take, your ears prick up doubly so. And when you witness the beautiful, horrifying spectacle of director Sam Mendes’ World War I film 1917… it’s like Lance the drug dealer from Pulp Fiction says: “When you shoot it, you will know where that extra money went.” 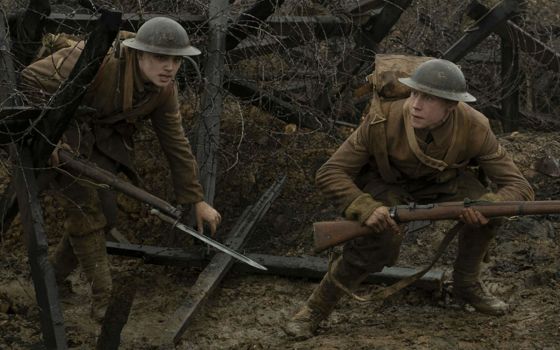 Following the story of two British soldiers sent on a dire mission, 1917‘s real-time milieu serves up tension and anxiety by the shovelfuls thanks to this one-take conceit. Aided by the actors’ muted and realistic tones, Dennis Gassner’s startling production design, and a script by Mendes and Krysty Wilson-Cairns which keeps the knife edge to our throats the whole of the film’s running time, 1917 is an immersive look into the hell of war and the deadly cost it so swiftly reaps.

Aside from a few familiar faces such as Game of Thrones‘ Richard Madden, Sherlock‘s Benedict Cumberbatch and Andrew Scott, Colin Firth, and Mark Strong, the main actors are relative newcomers to American audiences. That they aren’t big stars lends a certain credence to the film and makes it easier to accept their characters as they are. Harry Styles may have made an impression in Christopher Nolan’s WWII time-bending stunner Dunkirk, but his appearance had the effect of jolting us out of the film; there’s no trouble with that here, as both Dean-Charles Chapman and George MacKay inhabit their parts faithfully and keep us grounded alongside them.

Lance Corporals Blake (Chapman) and Schofield (MacKay) have just been given a critical task straight from the top: step into enemy territory, reach the front lines, and deliver a written command stopping the 1,600-man British force from advancing into a German-laid trap. From the fairly innocuous opening shot, Deakins’ photography effectively marches us in lockstep with these two, with the sights of death and destruction growing ever more harrowing as we progress through their journey. The attack happens in less than 24 hours, and the front lines are nine kilometers out, past the fabled No Man’s Land and well into German-occupied France.

Mendes and Deakins maintain tight reins throughout as they constantly balance the unfolding drama and the need to change the camera’s perspective to prevent stagnation. The script isn’t talky or modernized for today’s audiences; appropriately, plaintive scenes of solitude, silence, and introspection are contrasted with enveloping, kinetic camera movements for the film’s action scenes. A frantic Steadicam run through the bombed-out town of Ecoust is one of the film’s highlights, a remarkable feat which needs to be seen to be believed (it’s also one of the best sequences in any film this year). The film’s one-take motif guarantees our rapt attention, and it doesn’t do it wantonly or needlessly.

Without visible edits or cuts to give us relief and let us off the hook (except for one designed specifically to give the audience a breather and for narrative purposes), 1917‘s visual language shouts its hymn of immediacy. The feeling of not being able to turn away from the enemy waiting for us around a blind corner or from sniper shots from a high position has never been felt more palpably than this (outside of actually being in a combat situation). It’s not a thrill Mendes seeks to evoke in us; it’s the terror of not being able to see the dangers coming at us until it’s already too late.

But it’s more than just anxiety level-heightening at work here, as Mendes chooses to realistically show the life between the gunshots and explosions. As this is a wartime film, no one’s resting; everyone’s on red alert, merely on pause and preparing for the next big moment. The constant specter of doom hangs heavy in 1917‘s atmosphere, suffocating us with dread in quieter passages. A soldier singing a song before battle – and Deakins’ solemn camerawork around the huddled listeners – imparts a certain beauty, but the knowledge of what’s to come shrouds the scene in a mournful tone. When Blake and Schofield happen upon the ruins of a farm, not only are we tasked with seeing what remains, an air battle quickly dispels any kind of respite.

At the heart of it, 1917‘s purpose is a letter delivery, a direct point-to-point mission. The film’s final frames outline character underpinnings wisely kept from us until then, recontextualizing every word and action undertaken. It’s this moment which crystallizes the film’s theme of hope amid chaos, grasping to the impossible when everything and everyone seems to be saying otherwise. 1917 is a landmark achievement, giving a singular sense of humanity to the inhumanity of war through its hard-earned execution and flawless showmanship.

The one-take World War I film 1917 is a landmark achievement, employing its conceit to effectively show us the true terror of war.