1980s: The Golden Age of Wrestling 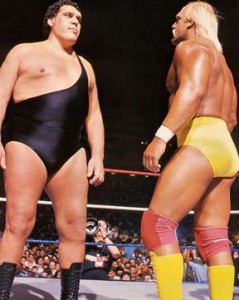 Anyone who grew up in the 1980s remembers watching WWF on Saturday mornings, and begging their parents to buy the occasional pay-per-view event. Though Ted Turner’s World Championship Wrestling was around, it was a mere pretender to Vince McMahon’s World Wrestling Federation (later renamed World Wrestling Entertainment). Here are the most popular wrestlers in the 80s:

Hulk Hogan. His name is synonymous with wrestling, and there’s a possibility WWF wouldn’t have been as popular if it weren’t for his high-energy theatrics. Hogan is Heavyweight Champion for life. By escaping the Iron Sheik’s camel clutch and pinning him to win the title in 1984, Hogan kick-started the Golden Age of wrestling. Anyone remember the words to the Hulk Hogan theme song? Inducted into the Hall of Fame in 2005.
Real name: Terry Bollea
Signature move: Atomic leg drop
From: Tampa, Florida

Andre the Giant. Weighing between 460 and 540 pounds throughout his career, and standing 7’4 tall, Andre was known as the “Eighth Wonder of the World.” More than any other character, he was the main attraction in this theater of freakishly big, strong and athletic people. First wrestler in the Hall of Fame.
Real name: André René Roussimoff
Signature move: Piledriver
From: Grenoble, France
Died: 1993

“Macho Man” Randy Savage. His distinctive husky voice was even more fun to mock than Hogan’s, and he always wore a bandanna and sunglasses. He was managed by his real life wife, Miss Elizabeth (who, after the marriage ended, was found dead of a drug overdose in the home of pro wrestler Lex Luger). Savage is the Mario Lemieux to Hogan’s Wayne Gretzky.
Real name: Randall Poffo
Signature move: Diving elbow drop
From: Columbus, Ohio

“Rowdy” Roddy Piper. Note: Roddy Piper was a Canadian, not a Scot! Known for his signature kilt and bagpipe entrance, Piper was one of the most hated wrestlers, but also BY FAR the funniest. His quick wit and unpredictability made him my favorite. Inducted into the Hall of Fame in 2005.
Real name: Roderick George Toombs
Signature move: Sleeper hold
From: Saskatoon, Saskatchewan

George “The Animal” Steele. This guy used to eat the turnbuckle during his match. Do you believe he was once a teacher? Also acted alongside Johnny Depp in Tim Burton’s Ed Wood. Inducted into the Hall of Fame in 1995.
Real name: William James Myers
Signature move: Full nelson
From: Detroit, Michigan

The Iron Sheik. With the Iranian hostage crisis still fresh on everyone’s minds in the mid 80s, the Iron Sheik, who was actually from Iran, was perhaps the most hated wrestler ever, alongside tag team partner Nikolai Volkoff. In the Hall of Fame.
Real name: Khosrow Ali Vaziri
Signature move: Camel clutch
From: Tehran, Iran

Nikolai Volkoff. The big Ruskie used to sing the Soviet national anthem before matches to a chorus of boos. Note: He wasn’t even from the Soviet Union, but still very much hated during Reagan’s Cold War era. In the Hall of Fame.
Real name: Josip Nikolai Peruzović
Signature move: Bear hug
From: Yugoslavia

Jake “The Snake” Roberts. Often a bad guy, at least once a good guy, this one-time crack addict was interesting because of the python named Damien that he carried around.
Real name: Aurelian Smith, Jr.
Signature move: DDT
From: Stone Mountain, Georgia

Junkyard Dog. A fan favorite with a chain around his neck who entered the ring to the song “Another One Bites the Dust” by Queen. In the Hall of Fame.
Real name: Sylvester Ritter
Signature move: Powerslam
From: Wadesboro, North Carolina
Died: 1998

Hillbilly Jim. This redneck, complete with a straw hat and overalls, was most fun when he wrestled alongside Uncle Elmer, Cousin Luke, and Cousin Junior.
Real name: Jim Morris
Signature move: Bearhug
From: Mud Lick, Kentucky

Memorable moment in WWF history: Hogan vs. Bundy in cage

Tito Santana. Another good guy, appeared in the first nine WrestleManias, but only had a 2-7 record. In the Hall of Fame.
Real name: Merced Solis
Signature move: Flying forearm
From: Tocula, Mexico

Brutus “The Barber” Beefcake. A wrestler who used to cut the hair of his opponents as they lay there unconscious. The gag got old, and his interview show, the Barbershop, sucked.
Real name: Edward Harrison “Ed” Leslie
Signature move: Apacalypse
From: Tampa, Florida

“The Mouth of the South” Jimmy Hart. Best known as the scrawny guy yelling through a megaphone, he managed at times Hulk Hogan, Bret Hart, Jerry “The King” Lawler, Ted DiBiase, and The Honky Tonk Man. In the Hall of Fame.
Real name: Jimmy Ray Hart
From: Jackson, Mississippi

“The Nature Boy” Ric Flair. Didn’t wrestle in WWF during the 80s but everyone knew he was Turner’s answer to Hulk Hogan. Still a star. Wooo! In the Hall of Fame.
Real name: Richard Morgan Fliehr
Signature move: Figure four leglock
From: Memphis, Tennessee

“Hacksaw” Jim Duggan. “Hoooo!!!” This all-American wrestler made me want to march around the playground with a 2-by-4.
Real name: James Duggan
Signature move: Tackled the guy, football style
From: Glen Falls, New York

Captain Lou Albano. In the 80s, one of the most popular good guy managers. Often seen with singer Cyndi Lauper. Inducted into the Hall of Fame in 1996.
Real name: Louis Vincent Albano
From: Mount Vernon, New York

“The Bird Man” Koko B. Ware. Always flapping his arms as he rode the back of his opponent.
Real name: James Ware
Signature move: Birdbuster
From: Union City, Tennessee

Mr. Perfect. Used to show film clips of him bowling a 300 game, running the table in pool, and hitting a shot in basketball. Wow, amazing. In the Hall of Fame.
Real name: Curt Hennig
Signature move: Perfect-plex
From: Robbinsdale, Minnesota
Died: 2003

Sgt. Slaughter. His popularity in the early 80s rivaled Hogan’s, and his feud with the Iron Sheik was memorable, but he was gone from 1985-1990, critical years in the WWF. Still in the Hall of Fame.
Real name: Robert Remus
Signature move: Cobra clutch
From: Detroit, Michigan

Jesse “The Body” Ventura. In the ring in the early 80s, Ventura was the color commentator alongside Gorilla Monsoon for much of the rest of the decade. Used to always say, “Look out, Gorilla!” as a good move was happening in the ring. Love the boa, gov. In the Hall of Fame.
Real name: Jesse Ventura
Signature move: Body breaker
From: Minneapolis, Minnesota

Brother Love. Red-faced manager that preached the word of ‘love’ while managing hated characters. Once came out in a kilt and argued with Roddy “Rowdy” Piper while Morton Downey Jr. was on stage.
Real name: Bruce Prichard
From: Pasadena, Texas

The Red Rooster. This guy was a joke from the start. I mean, he cockadodledooed before his matches.
Real name: Terry Taylor
Signature move: Sharpshooter
From: Atlanta, Georgia

Honkey Tonk Man. This Elvis impersonator started out as a good guy, but no one liked him, so bad he became.
Real name: Roy Wayne Farris
Signature move: Guitar shot
From: Memphis, Tennessee

Owen Hart. Hart made a brief appearance in the 80s WWF, but the Blue Blazer, with those awesome aerial moves, didn’t get popular til the 90s.
Real name: Owen James Hart
From: Calgary, Canada
Died: 1999