In lieu of the new Teenage Mutant Ninja Turtles movie hitting theaters this weekend, I decided to go back in time (much like our fair shelled quartet in their third film, even) to relive the good old days of Playmates Turtle Toys!

Yeah, well, there is a bit of a stipulation here: I didn’t cover any of the regular most popular figures, so nothing you see in the photo above. Yes, Mikey, Don, Raph, and Leo were all over the place and relatively easy to come by, so we all owned those figures. Instead, I focused on the far more bizarre and obscure of the playthings released anywhere from 1988 till about 1991.

Oh, and lest I forget my manners, many of these images came from a very cool site dedicated to preserving our collective love for all things Turtle Toys, the now defunct ninjaturtles.com. So, let’s all relive our younger years when life was simpler and the TMNT boys were all over the place with 20 of the oddest collectibles. Take a trip into the Nostalgia Sewer with us… 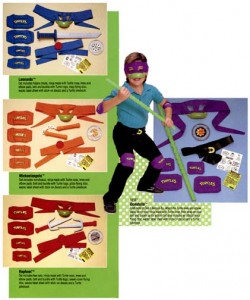 Apparently, just slapping on cheap knee and elbow pads made every kid think he or she was a ninja turtle. Imagination aside, this is how kids got their asses kicked. 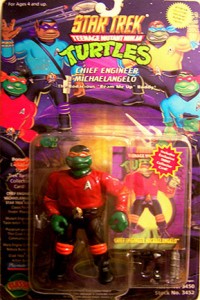 I honestly had no idea Star Trek commissioned the turtle gang to commandeer the Enterprise? And I thought Voyager was lame. 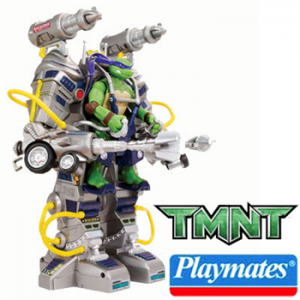 What honestly are a group of mutated and super-strong turtles going up against that they need to be ridiculously enhanced by a massive robot exoskeleton? 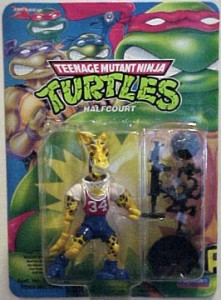 So throughout the creation of the toys, it became pretty obvious early on that just making turtles, boring-ass Foot Clan, and like two other characters was going to get pretty dull. So, they mutated every conceivable animal on the planet. Oh, and this one plays basketball really well. Of course. 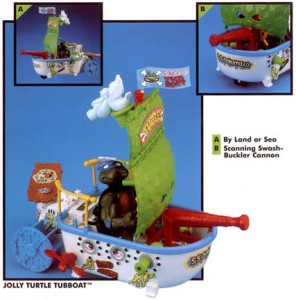 Really. Turtles, who already live in storm drains and sewers need a seaworthy bathtub to get around? Really. 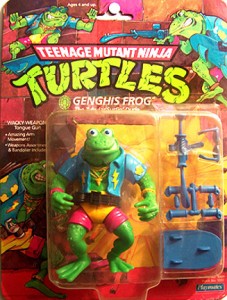 Long before Battle Toads was friend to the Ninja Turtles, Genghis Frog. And, according to his toy, here’s how it all went down: ‘Genghis Frog, once a humble, naive tadpole, was accidentally mutated, then intentionally tricked by the evil Shredder to join his cohorts in horror. Once exposed to the sinister, wicked ways of Shredder, Genghis soon realized that the Turtles were his true friends.‘ We’ve all learned something here. 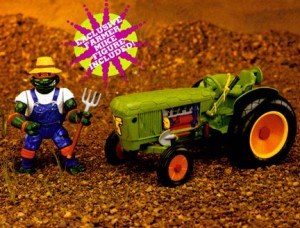 This has got to be the least threatening Ninja I have ever seen. And then he goes at you with his pitchfork. Ninja style. 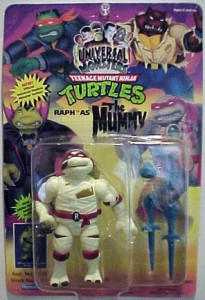 Somehow, for inexplicable reasons, Hollywood Classic Movie Monsters decided to merge with the TMNT franchise. This mummy Raph is but one of six or so of the creatures including Dracula, Frankenstein, and The Creature. I have to admit, though bizarre, this is pretty sweet. 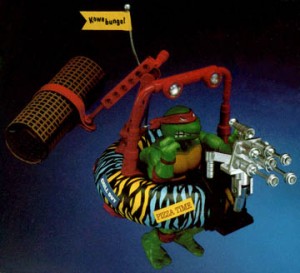 Isn’t having turtles milling about in an inner tube much akin to a bird with a hang glider? 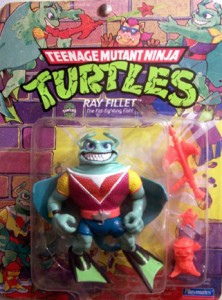 This, right here, is all kinds of messed up: ‘You smell something fishy? That’s because you just picked up Ray Fillet, the coolest sea creature to ever leap from the deep. Spawned from a marine biologist and a manta ray, Ray Fillet emerged from a toxic sewer pipe only to discover himself super-strong and super-slimy.’ 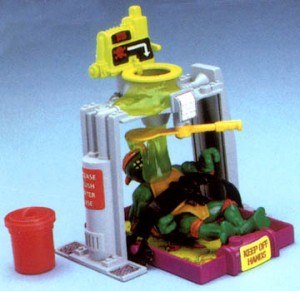 If it was the ooze that made every single one of these run-of-the-mill animals become fighting heroes in the first place, how is this a ‘trap’? 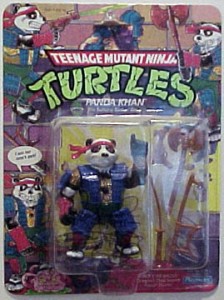 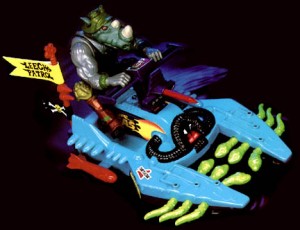 The flag says ‘Leech Patrol’ and the little grippers in from have six mutated snakes and it’s coming after the Turtles. I’d either run or laugh. Or run and laugh. 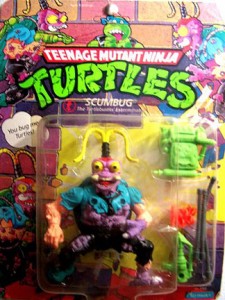 He used to be an exterminator, now, thanks to a bath in that ever-present ooze, he’s working for Shredder and gathering bugs to his own personal army. Good for him. 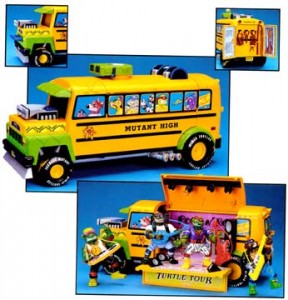 Not only a completely nondescript school bus (good Lord) that says, ‘Mutant Hight’ on the side, but also a stage for the band, ‘Turtle Town’. Because the Turtles have all that extra time to form a band, what with all those other malformed animals roaming around. 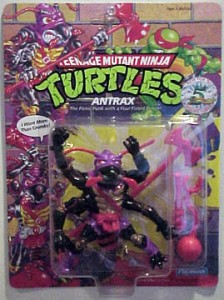 All of this is just silly: ‘When Krang, on his annual scouting trip for Turtle tearing talent, spotted this top crop choice! Krang was impressed with Antrax’s skill with the ante-up axe and the beat ’em back bat. Krang offered Antrax money, power – even cable TV (with all the channels, of course). Antrax accepted and became Krang’s own judge, jury and Turtle executioner.’ 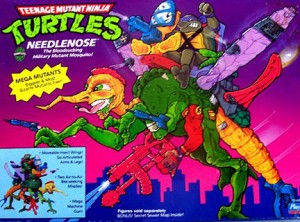 It’s a giant mosquito that the Turtles fly on. That is all. Yep, ended the sentence in a preposition, got a problem with that? 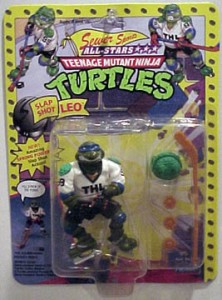 Ya know, I can fully understand when Casey Jones uses his myriad sporting equipment to thwart crime; it is after all, his forte. But when the Turtles do it, it’s just sad. 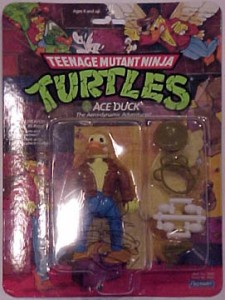 Someone better have been fired after this fiasco: ‘Hungry for duck brain, Krang ordered Shredder to beam an Earthbound duck to Dimension X (there’s a shortage of ducks in Dimension X). While transmuting the duck, famous test pilot, Ace Conrad, accidentally flew into the energy beam. The emerging plane was suddenly piloted by none other than Ace Duck, the aero-dynamic adventurer with a big bill.’ 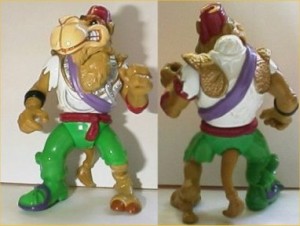 The fact that this nut-job is a Camel notwithstanding, here’s his weaponry and attack description: ‘Loaded down with his wonderful weapons, like the swami slicin’ sword and magic lamp pistol, this crazy carvin’ camel is a cut above the rest. He’s a sewer sultan and desert dude who’s quick at the hip with lightnin’ fast twists and turns.’