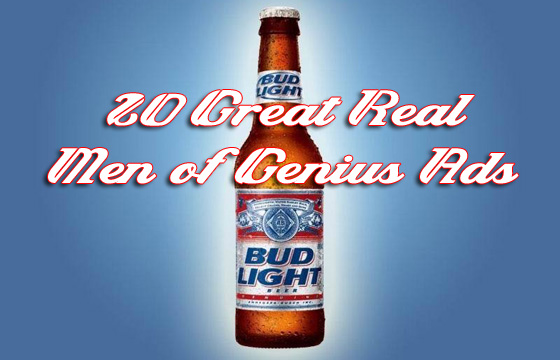 Bud Light isn’t all that good a beer. But it has perhaps the best commercials of any brew with its Real Men of Genius, formerly Real American Heroes ads. We’ll cite Wikipedia for a little more back story :

Real Men of Genius is a series of one-minute-long American radio advertisements Bud Light beer created by Bob Winter, a copywriter at DDB Chicago. The ad campaign, which began in 1999 under the title Real American Heroes (changed after the September 11, 2001 attacks) and has featured over 100 installments. Some spots were abbreviated and adapted for television beginning in 2003; the first two TV versions were “Mr. Footlong” and “Mr. Toupee”. Anheuser-Busch changed the name Real American Heroes after the 9/11 attacks because Anheuser-Busch felt that it could not in good conscience continue to use the term “hero” in that context after so many people had performed genuine acts of heroism.

We here at Gunaxin like to drink and listen to them, so please join us, sit back, get drunk, and enjoy 20 great Real Men of Genius ads.

And a bonus, the best one ever: