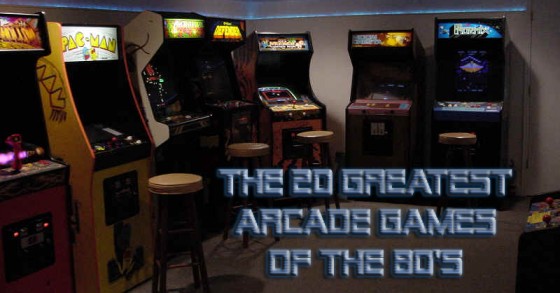 Though today’s home consoles have certainly more than one-upped the video game machines of yesterday, and they’ve made getting to and playing your favorite game almost impossibly simple, there are still those of us who occasionally long for the days of the long dead arcade. With the film Pixels hitting theaters this weekend, we couldn’t help but feel nostalgic for the days of pixelated arcade games.

I don’t know about you, but my local arcade, Star World, was a dark, chilly, hangar chock full of neon and harsh light halos that emanated from every machine like the inviting glows of miniature Sin City casinos. The house lights were never on. If you needed to see your way from game to game, well, then you hadn’t been there enough to memorize a path my friend. One wall housed Skee-Ball, another, rows and rows of pinball machines… but strewn throughout the main concourse in little islands of four back-to-back bellowing, beckoning boxes were the real arcade giants; the honest to goodness video games that shaped our Reagan-year youths. 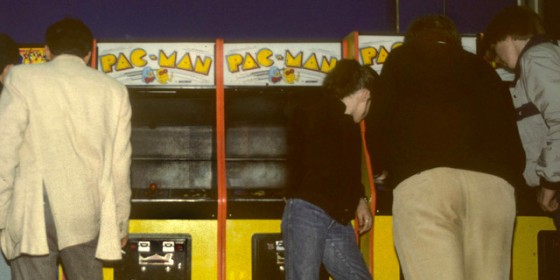 Each of these games were, at one time or another, part of the beeping, chirruping, rainbow that was Star World (or any arcade of that era), and to many of you, these very machines were your friends and enemies, too. But even as I gather together the pics and descriptions of these brave, lost soldiers of the video arcade age, this list is still subjective. So, please let me know in the comments if I’ve omitted any of your favorites. 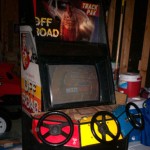 As basic as it comes: truck racing on increasingly difficult dirt tracks. But the coolest part was being able to upgrade your vehicle after every successful run with cool add-ons like nitro! Kick ass! Oh, and who could forget hot chicks and trophies! 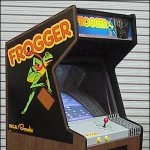 I’m sorry but if you have never played a game of Frogger… wait, let’s just say, if you don’t even know what Frogger is and were alive and cognizant in the 80’s, you are a Communist and need to go back to 80’s USSR where you belong. Commie. 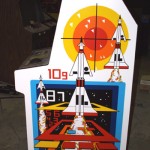 Ah Missile Command. So deceptively simple yet, so infuriating. All you had to do was master the fine art of self control while aiming your cross-hairs at your targets and you’d have more than enough missiles to do the job. But no, some moron was always whipping that big wheel around and around, launching willy nilly. It was me. 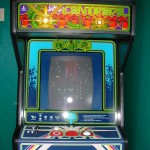 This is one of several entries where I use both the original and the sequel due to the simple fact that they were often found side by side in the same arcade and because the sequel was just as popular as the first. Here we have you, represented by either a ‘head’ or ‘gnome’, depending who you ask shooting up at an oncoming insect. Fun, fast, and hot track-ball action! 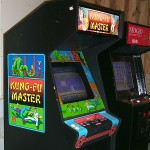 Believe it or not, the Japanese version of this game was based on the movie of the same name starring Jackie Chan. Cool. In both versions of this side-scrolling classic, the object was a simple as the come: kick your opponent’s collective asses. 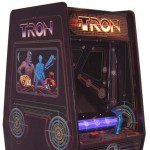 For some reason, Tron became the central focal point of our arcade for a long time. Understandably after the film was released, but the machine never moved. The game was pretty tough: I/O Tower, MCP Cone, Battle Tanks, and Light Cycles made up the four levels and each was a big pain in the ass. The sequel and it’s disc throwing lunacy was maddening. 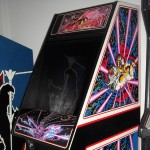 You played as an artistic ‘C’ shaped ship in a bizarrely-shaped tube blasting off at any enemy that happened to land on your playing field. If I recall, the control was a dial and a firing button. Man, I loved this game. 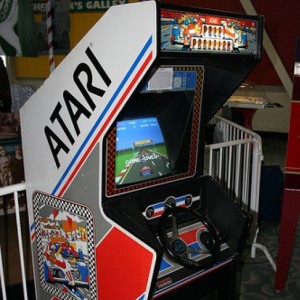 One of the first, if not certainly the most classic, Formula-1 racing games. The view was something different at the time as well: behind and above the car so you could see the horizon line and upcoming turns. Fun and very nice with the wheel and pedal and gearshift. Oh yeah. 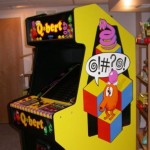 Easily one of the most bizarre games ever created. Seemingly simple, I mean all you had to do was change the colors of the playing cubes… ah, but watch your ass for Slick, Ugg, Wrong-Way, and Coily! 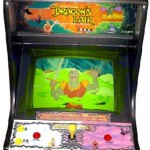 First off, a quick nod to the artist of this laser-disc-style video game, Don Bluth: the man behind A Land Before Time and An American Tale among countless others. Also, Space Ace wasn’t a direct sequel inasmuch as it was another game played the exact same way by the same people. Tough games, both. 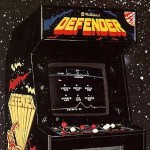 One of the fastest video games to come out in the 80’s with a look and feel right up there with the standards of today. Side-scrolling, space ship-piloting, shooter, you had to kill the enemy while simultaneously saving the little people pegs being taken hostage. Awesome. Also, it often came packaged with… 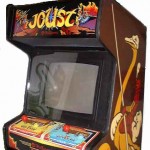 Joust. The insanely addictive ostrich knights game where you not only destroyed the enemy rider and bird, but also collected the eggs. But watch that lava pit! 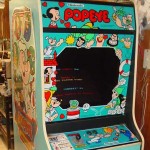 Who would have thought that one could take the funny-page and animated antics of everyone’s favorite grizzled, hormonally imbalanced sailor with a wicked speech impediment and turn him into a video game? Well, Nintendo, that’s who. The play was very similar to that titular simian… 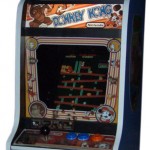 Donkey Kong. One of those few games that the mere mention of which elicits nods and smiles as your audience lapses into a haze of nostalgia. By the way, if you haven’t seen King of Kong: A Fistful of Quarters, do so. It is one of the greatest, and saddest, documentaries of all time. 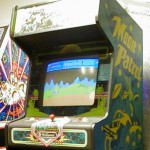 A staple in our arcade that stood the test of far more advanced games that came and went after it. Moon Patrol carved out its own little niche and hung on tenaciously till the place shut down. You played as a buggy shooting at enemies while doing your best to jump over obstacles. Ah memories. 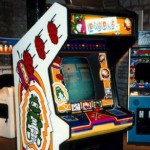 No other game gave you the opportunity to kill your underground-dwelling enemies by inflating them to death via pump. Outstanding. Not a whole lot to know here: you dig, you pump… you dig? 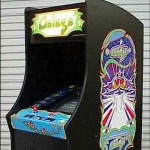 The far superior sequel to 1979’s Galaxian, Galaga follows the exploits of a ‘Space Invaders’-like ship that shoots up at a horde of alien enemies. Simple but oh so tough the further you advanced. 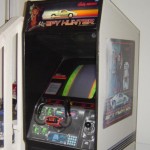 An action driving game like no other! Not only having to command the vehicle itself, but also the menagerie of weapons, you had to destroy enemy vehicles and remain in one piece at the same time. I loved the semi that dropped you off. 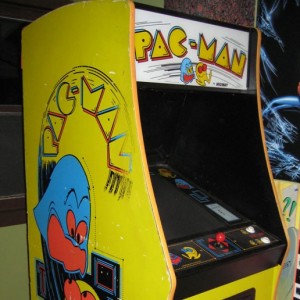 Few things can say that they formed a generation, but Pac-Man and its many sequels is most definitely one thing that can. There really is no reason to describe what these games were like to play other than to say that each incarnation featured its own specialized sets of enemy ghosts and special ‘fruits’ as well as cosmetically to the Pac clan themselves. 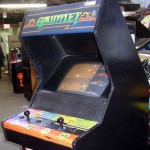 This, to me and I’m sure many of you, was the pinnacle of arcade video game experiences. Four players, dungeons after dungeons, ghosts, treasure… it was all there. Your choice of Warrior, Wizard, Valkyrie, and Elf offered you a unique ability for each: magic, strength, armor, and speed respectively. Just don’t shoot the food! “Warrior is about to die!” Yep, sounds like the Speak N’ Spell because Texas Instruments did both!