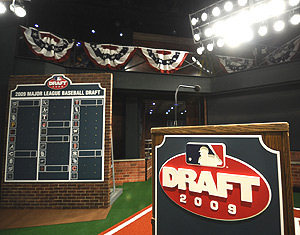 Tuesday, June 9th, marks the start of the MLB Draft (it’ll go on for a few days). And while the baseball draft doesn’t come with the anticipation, nor the glam and glitz, of the NFL or NBA draft, it’s still a fun time for fans to get a glimpse of what might be a team’s future. Granted, a lot of draft picks do not make much of an impact in the majors. And signability remains a huge concern, so much so, that the top talent often is not picked first. That makes the draft a bit unique among professional leagues, where it isn’t always about selecting the best player available. However, as college baseball continues to gain traction as an option for top athletes and as MLB continues to increase the exposure of the Rule IV amateur draft, there will always be more attention paid to what is hoped to be the next generation of baseball stars.

This year’s crop is considered a pretty weak one, save for one super-stud at the top, Steve Strasburg. After that, the pickings start to get slim between a bunch of disappointing hitters and a bevy of pitchers with questions marks. Although the standard tagline applies that most of these players will not make an impact for years, remember that David Price and Matt Wieters were 2007 draftees and are starting to make their impact felt in the Majors. Plus Gordon Beckham recently became the first 2008 draftee to debut for the White Sox. So things can happen fast. Here are ten players to keep an eye on for Tuesday to see where they land. These may not be the ten best players, but are some of the most interesting prospects worth monitoring. And if you’re really forward looking, check out this story on Bryce Harper, the “next big thing” in the world of baseball who may try and become eligible for the 2010 draft. 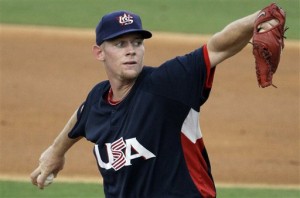 Strasburg has been called by some as the best pitching prospect in draft history and many consider him to be Major League ready right now. That’s how good he is. He absolutely dominated the college ranks, although one should note he did so for a non-major team in a secondary conference. Still, he can reach triple digits with his fastball, has outstanding command, and a pretty good breaking ball. Barring injury he should be a good one, maybe even one day the best pitcher in baseball. The downside? As BP’s Kevin Goldstein joked, “there’s no definitive proof that he’s not an android from a faraway planet bent on world destruction.” He’s going to be selected by the Washington Nationals with the #1 pick, he’s going to command a record setting signing bonus, and there’s a pretty good chance he makes at least a cameo appearance in the Majors this season. And yeah, that’s him above playing for Team USA in the Beijing Olympics. 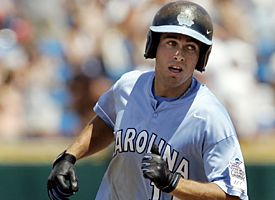 The Miss Congeniality of this year’s draft, Ackley has emerged as the best of the rest in the post-Strasburg derby. He’s also the only hitter critics can agree belongs in the top ten picks. The draft class is that weak on positional talent. Which doesn’t mean teams won’t reach for positional talent, it’s just that Ackley’s the onlysure thing. His combination of tools includes above-average power and speed, along with amazing hands that should make him an excellent hitter overall. His ideal home is in center field, but he’s largely untested there. The hope is that he develops into a smoothhitting centerfielder and an eventual multiple-time all-star. The Seattle Mariners will likely pay the price to find out, although there’s a slight chance he falls to the third pick and the San Diego Padres. 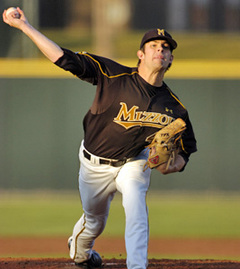 Last year, Crow was battling Brian Matusz for the rights to be the top pitcher off the 2008 draft board. Matusz won, going fourth overall to the Baltimore Orioles. Crow ended up going ninth to the Washington Nationals, but chose not to sign. Now, the top right-handed arm from 2008 is back, again showing a good fastball and above-average slider. The lost year of development doesn’t help, but in a weak draft class a polished college pitcher with good credentials is an attractive option. The former Missouri Tiger has looked good in the Indy leagues, and is poised for another top ten selection. He could go anywhere in the top ten starting with the secondpick, but seems most destined for the Baltimore Orioles at fifth overall this year. 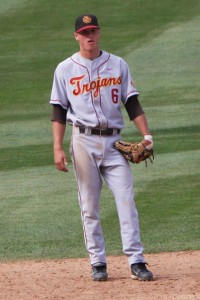 A mere six months ago, Green seemed like the clear #2 pick behind Strasburg. But a disappointing season has seen his stock plummet, to the point where he’s no longer even a guarantee to be picked in the top 10. Although a college shortstop, questions remain about his ability to remain at the position defensively. There are also questions about his power, making a switch to third not the best fit. What do you do with a light hitting player if he’s not in the middle infield? If you believe he can stay at short, and don’t put too much stock into a sub-par 2009, Green is still a solid choice. But if you see the current struggles and possible lack of range at short, he might not even be a Major League regular. A top ten selection is still likely given the complete lack of hitting choices, but where exactly he lands is anyone’s guess. Cincinnati is one possibility, although a better fit might actually be at #12 to the Kansas City Royals. 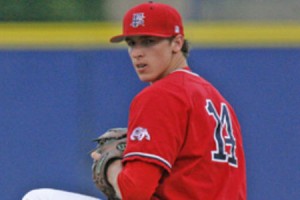 Like Crow, Scheppers was a big time college pitcher seemingly headed for a big pay day last June. Then shoulder problems hit, and the Fresno State Bulldog saw his stock plummet. Teams became scared off by the injury, and he did not get picked until the 48th selection of last year’s draft. And to add insult to injury, he was picked by the perennial losers, the Pittsburgh Pirates. Not satisfied with the money offered, he chose to try his hand again at the draft this spring. The decision seems to be a good one, as the electric fastball has returned, as has the power curve. Healthquestion marks remain, and that mystery makes him a very high risk factor. On pure talent, he might be the second best player in the draft. But the risk, combined with rumors he might try and leverage a contract with a Japanese pro team into a huge pay day have scared off some teams. Like Green, his final destination is a bit of a mystery, but the Tigers are never scared off by big price tags. 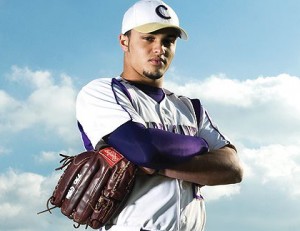 Tate is an old school general manager’s dream as he’s the best pure athlete in the draft, and thus the guy with the highest ceiling. With lackluster options, there’s some incentive to roll the dice and hope to win big with Tate. He has the raw power and speed to turn into a good one. But too often those players go the Corey Patterson route, more raw skills than actual baseball talent. And in such cases the pick has the highest chance of crapping out. Tate’s been strongly linked to San Diego at #3, but due to the lack of better options he probably lands in the Top 10 somewhere even if the Padres pass. The next step is to sign him and hope he chooses baseball over football. 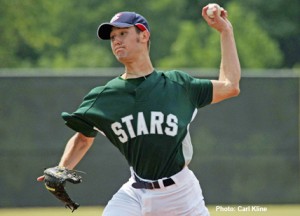 The long, lean lefty sports a surprisingly deep arsenal for a high school arm. This includes a pretty good fastball-slider combination, plus a solid curve and decent change. With generally good command, if he can throw four decent offerings all from the left hand side, it’s hard to not see him becoming at least a useful piece on a big league roster. Provided he stays healthy. That’s the caveat. It’s always a risk with high school pitchers, but even moreso with Matzek who has a “high effort” delivery. The Orioles, Giants, and Reds are all possible landing spots. 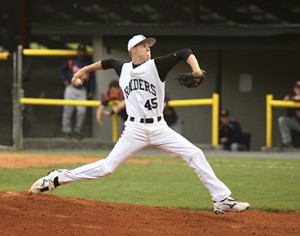 Wheeler is one of many high school power right-handers in this draft class, although he tends to rate near the top due to excellent command and good mechanics. He’s doesn’t sport much else behind a good fastball right now, but there’s enough to get many teams interested, including several in the top ten selections, like the San Francisco Giants and the Atlanta Braves. Projectability is the key here and if the Braves are interested, I would take a second look at the kid, even if he is a Georgia kid and there could be a little home cooking go on. 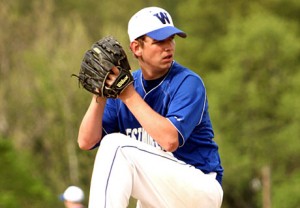 Turner is Wheeler with a little more velocity, a little more polish, and a bit less control. Referred to by some as the top high school pitcher in the draft, he can reach 98 on the radar gun, and also has a good curve. Signability remains a bit of a concern, but he projects to be a frontline starter. Due to price tag concerns, he’s been linked to the Tigers in many mock drafts, and they are one of a few teams that can prevent Turner from joining a very strong Tarheel program in the fall. 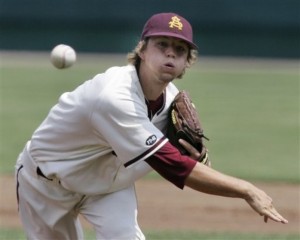 Leake is not a sexy pick, but posted excellent numbers against top notch college competition. Scouts grade three of his pitches as plus, and he has good control. The problem? He’s an undersized right-hander, and those kind of pitchers tend to get overlooked. Even after the success of guys like Tim Hudson and Roy Oswalt. That and he probably won’t get much better than he is now. What you see is what you get. With that kind of pedigree, the Oakland A’s have been linked to him, although the Nationals at #10 make some sense too.