It’s the final installment of our 2010 Winter Olympic Ice Hockey Preview, which means its prediction time. Admittedly picking an Olympic Champion a year in advance seems a bit of stretch. How can one possibly know what will happen a year down the road? But realistically we’ve outlined each team and no major changes should be expected to occur. You should have a good feel for who will be on each team and what they need to do to succeed. So its time to put the predictions down in print and see how it all shakes out. Feel free to join along in the comments section. We can look back and see how it all plays out. I’ll probably look stupid a year from now. 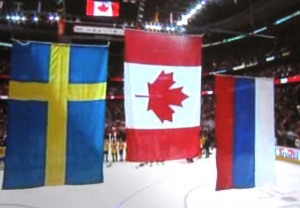 I know it’s an obvious pick, but the elements are aligned for the team’s success. And they are the most talented squad.

A Traditional international force, I can see Sweden again making a run to the finals. They generally come to play in these big tournaments, and hopefully the smaller ice doesn’t effect them much.

Maybe Russia’s best squad in Olympic play (not counting Soviet squads), a bronze medal will probably be viewed as a disappointment. In short, this team is loaded.

Note: Yes, this is the same finish from the recently completed World Junior Championships.