Updating our 2010 Winter Olympic Ice Hockey Preview, today we examine the Russia Federation or the Big Red Machine. Russia finished 4th in the 2006 Olympics, losing the Bronze medal game to the Czech Republic. Despite its reputation as of the top rated and most successful ice hockey nations in the world, Russia has never won Olympic Gold. That’s because Russia splintered off from the Soviet Union when the country officially dissolved in December 1991. Of course, the Soviet Union national ice hockey team won seven gold medals in nine Olympic appearances. Also, the Unified Team (which consisted of six of the fifteen former Soviet republics – Russia, Ukraine, Kazakhstan, Belarus, Uzbekistan, and Armenia) won gold at the 1992 Winter games. And Russia citizens made up the bulk of those squads.

As Russia, the country has competed four times in ice hockey, winning two medals. Even with out a gold medal on the résumé, the country remains a dangerous opponent, as evidence by its world number two ranking and 2008 World Championship, a game in which they defeated Canada on Canadian soil. Always noted for their explosive scorers, the 2010 squad is looking strong as they have some of the best players in the NHL.

The team is coached by Vyacheslav “Slava” Bykov. 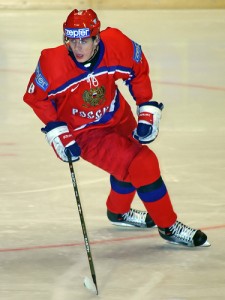 Alexander Ovechkin is the defending NHL MVP, top goal scorer, and arguably the game’s best player. If he’s isn’t the game’s best player, that mantle might fall to countryman Evgeni Malkin, MVP runner-up. Both will anchor scoring lines for Russia, or join up to form a superline. Despite an on-ice rivalry, Ovechkin and Malkin have worked well together in the past. Howver, these two names just scratch the surface of Russia’s scoring potential.

Ilya Kovalchuk finished second in goals behind Ovechkin and is another dangerous scorer. Datsyuk finished 4th in the league in scoring, won the Selke trophy for being the best defensive forward, and helped the Red Wings win the Stanley Cup. Semin is another dangerous scorer, he was the league leader in scoring this season before getting injured. All three guys should find themselves on a scoring line in Vancouver.

To complement the immense scoring talent, players like Federov and Frolov help bring defensive presence. The roster is rounded out with a number of young skilled players like Radulov, Zherdev, and Filatov plus a few Russian Leaguers. Team Russia always likes to take a few players that play at home, but in this case they can pick for a number of former NHLers. You could easily see players like Sergei Zinovjev or Danis Zaripov slide in if a few more KHLers are selected.

The defensive ranks are thinner than the forwards, but still pack a strong punch. Andrei Markov has developed into a good all-around defenseman, strong both on defense and offense. He’ll likely team with offensive powerhouse Sergei Gonchar on the power play. These two veterans log huge minutes for their respective NHL clubs, and provide Russia with two of the better rear guards around.

Zubov would be a great addition to the squad, but has often declined to participate for the national team in the past. Combined with a rash of recent injuries, he might not make the cut. But if he’s healthy, he’s certainly one of Russia’s best options and he makes this squad. Volchenkov, Tyutin, and Grebeshov are around for defense purposes only. If a spot opens up, Ilya Nikulinand Rangers blueliner Dmitri Kalinin will merit consideration.

A position of little depth in the past, Russia could field its deepest pool of goaltending talent in quite some time. Nabokov was the runner-up to for the Vezina last season and is generally considered a top 5 goalie in the NHL. Although a Russian citizen, Nabokov was born in present day Kazakhstan and represented that country in the 1994 World Championships. He was denied permission to play for Russia at the 2002 games, but finally allowed to represent them in 2006. As the anchor of the ’08 world Championship squad, he’ll be expected to be the #1 goalie in Vancouver.

Backing him up will be Bryzgalov, who became a full time NHL starter last season. Most experts consider him an above-average NHL goaltender, despite some ups and downs. The final spot goes to Khabibulin, who backstopped the Tampa Bay Lightning to a Stanley Cup in 2004. He’s been inconsistent since that time, but is again playing strong this year. An interesting tidbit on Khabibulin is that he won a gold medal in 1992 as the third goaltender for the Soviet Team. Controversy arose when legendary Russian coach Viktor Tikhonov kept the medal for himself (coaches and management are not awarded medals in Olympic hockey) instead of allowing Khabibulin to have one, as Khabibulin had not played a game in the tournament. This lead to a stalemate between Russian Hockey and Khabibulin that was finally resolved in 2002.

If any of the goalies can’t play, except Alexander Eremenko to snare the spot. A real darkhorse candidate is Capitals prospect Simeon Varlamov.

Outlook: Russia’s strength has always been and remains its offensive upside. Fielding three of the top four scorers from the NHL last season, plus the runner-up in goals will make the offense scary good. Despite the offensive prowess, I believe the team’s success will largely be dictated by its defensive play, both by the forwards and the defensemen. They will also require the goaltending to stand tall. By talent alone, the country is the second best squad in the tournament and a definite gold medal contender, something the country hasn’t won since Russia replaced the Soviet Union (and also the short lived Unified Team of 1992). This squad is good enough to end that drought.