Once every four years something magical happens: America actually starts to care about soccer. The World Cup is a sporting event like no other, drawing the attention of both hardcore fans and people who couldn’t be less interested in the game at any other time. The former will refuse to be swayed from the predictions they made as soon as the groups were announced, but for the latter we’ve put together a guide of what we think will go down. Use it to introduce yourself to this year’s World Cup, amaze your friends with your ability to predict the tournament’s outcome, or head to Vegas and let us help you win big money! OK, that last one’s probably a pretty bad idea.

The host country has never failed to make it out of the opening round, but it looks like South Africa will break that streak. The support from the home crowd should be amazing, but that won’t change the fact that South Africa is the second lowest ranked team in the tournament. They should put up a decent fight in all of their matches, but don’t expect much from them beyond that. 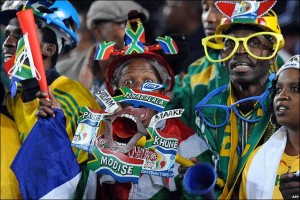 Well, you can expect a lot of insanity from their fans.

Mexico has never been a true international powerhouse, but they consistently advance to the second round and 2010 should prove to be no exception. Their qualifying campaign was shaky and they finished behind the United States, but they’re still a solid team that shouldn’t have too much trouble moving on.

There aren’t a lot of expectations for Uruguay, but if they can squeak out a win against Mexico they’ll have a pretty good shot at moving to the second round. We wouldn’t bet on them, but don’t be too surprised if they pull off an upset.

France had a poor and controversial qualifying campaign, but they’re still the heavy group favourites. A lot of people are hoping they’ll repeat their disastrous 2002 performance to avenge the fact that they won their spot in South Africa on a blatant handball, but while they’re a weaker team than the French side that played in the 2006 final they’re still strong enough to move on without much trouble.

Argentina should cruise to an easy group victory thanks to their incredibly talented line-up, but the possibility of antics from Maradona, their coach, could upset their chances in the later stages. Still, Argentina’s raw skill will no doubt see them through the first round. 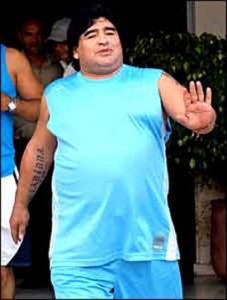 Also, there should be at least two dozen hilarious photos of Maradona taken during the tournament.

Nigeria has potential, but their talent is marred by inconsistency. If the fast, high scoring side that they’re capable of being shows up they’ll be a force to be reckoned with, but if the defensively inept squad that barely qualified for the finals makes an appearance instead they’ll crash and burn. Given the tendency for teams from the host continent to do well we’re willing to bet on the former.

South Korea is the strongest Asian team in the tournament, but it’s unlikely they’ll repeat their heroics from the 2002 World Cup. They’re a decent side that should put up a respectable performance, but they lack the depth of the other countries in their group.

It’s tough to make predictions about Greece because of the way they play; offensively they’re very weak, but they can grind out upset victories thanks to their stifling defence. It should be interesting to see how their defensive style of play holds up against the high flying offences of Argentina and Nigeria, but we suspect at some point they’ll be overwhelmed.

England tends to be overrated in major tournaments, but they had an absolutely dominant qualifying campaign and should storm through what is probably the weakest group. This is the best English squad in quite awhile, but the pressure of expectations could get to them.

The United States has been very successful lately; they won their qualifying group over favoured Mexico and made a remarkable run in the 2009 Confederations Cup. They’ll have a tough start to the tournament with a match against England, but regardless of what happens there they should make it out of the first round without too much trouble. 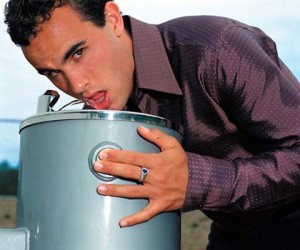 And while he’s in South Africa, Landon Donovan has promised to molest every water fountain he can find.

Algeria should be happy just to have made it to South Africa; they beat arch-rivals Egypt in a playoff to qualify, but they aren’t expected to make much noise in this tournament. They’ll have to score a big upset against either England or the US to have any hope of moving past the group stage.

Slovenia is in a similar situation. They upset Russia to make it to the finals, but when they went to the World Cup in 2006 they left without a single point, and a repeat of that performance is definitely possible. Like Greece, Slovenia has a stingy defence, but they lack the offensive capability to go very far in South Africa.

Germany is a powerhouse, although their star player, Michael Ballack, is out with an injury. That’s going to hurt their chances of going all the way, but they still have enough talent to make it out of the group stage without much difficulty.

After Germany, the rest of the group is a tossup. Serbia and Ghana both had strong qualification campaigns, and they have solid line-ups full of good, reliable players. On paper, Serbia looks a little more talented, but Ghana made it to the second round in 2006 and their squad has more international experience. 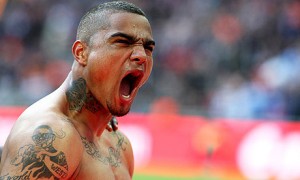 The guy who injured Ballack plays for Ghana. His job is to scare the shit out of the opposition.

Australia can’t be ruled out either; while they appear to be the weakest team in this group they’re definitely capable of scraping together a couple of wins and moving on. The Socceroos also looked good in qualification, but they’ll have to be at their absolute best if they want to get out of the group stage.

The Netherlands should cruise to an easy group victory. The real test for them will come in the knockout round, because the Dutch consistently field talented teams but rarely take away trophies to show for it.

Denmark had a fantastic qualification run, and they’ve played well against the Dutch as of late. However, not many people are giving them a chance at moving on; while they definitely have the potential to surprise, it’s tough to picture them repeating their remarkable qualification.

Cameroon’s qualification campaign had a weak start, but a coaching change fixed that and their star player, Samuel Eto’o, is a goal scoring machine. He has the potential to take Cameroon far, but conversely they lack the depth to be a threatening opponent if Eto’o gets shut down. 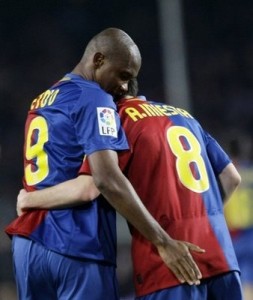 Eto’o is also a gentle lover.

There’s nothing technically wrong with Japan’s team, but there’s nothing about them that really stands out either. They should have a respectable tournament, but it’s hard to see them going very far when the other countries in their group simply look stronger.

Italy is looking old and slow compared to the team that won it all in 2006, but they’re still a strong squad that should have little trouble dominating this group.

While Paraguay is often overlooked in favour of Brazil and Argentina, they’re a talented side that performed well in the South American qualification. They’ll be playing for second place in this group, and they have enough offensive capability to ensure that they’ll likely get it.

New Zealand did well to make it to the finals, but they’re a weak team that will struggle to get anything of their group games. A hard fought draw and a couple of pretty goals is about all they can hope to accomplish in South Africa. 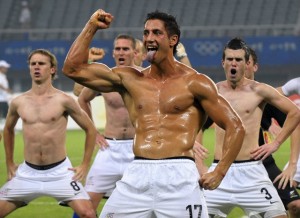 On the plus side, New Zealand will easily win the prize for the most homoerotic dance routine.

This is Slovakia’s first trip to the World Cup, and while they have a decent team the lack of experience could hurt them. They’ll put up a good fight and there’s a chance they’ll advance, but we wouldn’t bet on it.

You can’t have a sports tournament without labelling a group the Group of Death, and this is the one for 2010. It’s unwise to bet against Brazil, of course; even though they’re in a tough group it would be a shock if they didn’t move on.

It was impressive of North Korea to qualify, but they drew pretty much the worst group possible. All they can realistically hope for is to play some respectable matches against their much better opponents. 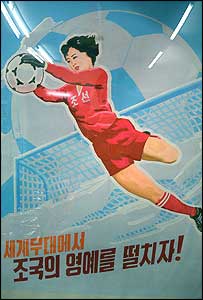 However, North Korea does have the best soccer related propaganda.

Ivory Coast are the strongest African team, with both serious offensive capability and a good backend. They’re definitely Africa’s best hope for a shot at the Cup, but with such a tough group it wouldn’t be surprising if they bowed out early.

Portugal had a tough qualification run, but they were missing their star player, Cristiano Ronaldo, for most of it. He’ll be at full health in South Africa, and he’ll be leading a very talented squad. Whether or not they move on will likely come down to what should be a very entertaining match against Ivory Coast. Unfortunately, no matter what happens in this group, a great team will have to leave South Africa in disappointment.

Spain is ranked number one in the world, and they’re favourites to win the entire tournament. They shouldn’t have any trouble cruising through this group.

Like Group D, who comes second is a tossup. Switzerland and Chile both look solid; Chile has a young, potent offence but a weak defence, while Switzerland is a more balanced but less remarkable squad. Their chances of finishing second in the group are pretty much equal, but we have to favour Chile’s goal scoring capabilities. 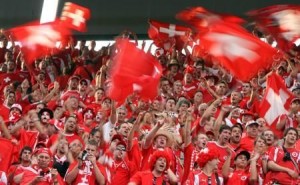 Also, we don’t want to have to listen to the Swiss fans and their damn cowbells for very long.

Honduras are fielding a decent team, but it will be tough for them to move out of this group. They’ll be more likely to upset another team’s trip to the second round than they will be to make one of their own.

The Rest of the Tournament

Once the World Cup moves into the second round the field becomes wide open. With penalty shootouts an option it’s possible for a weaker team to upset a stronger one, and all it takes is one bad game, or even just a single bad play, for a favoured country to knock themselves out of the tournament.

However, there are always a few countries that are considered likely to win it all, and in 2010 we’d lean towards either Spain or Argentina. Spain’s Euro 2008 win, their dominant qualification run and their number one world ranking are hard to bet against, despite their defeat in the 2009 Confederations Cup. As for Argentina, their incredible talent could be bolstered by a bit of managerial brilliance from Maradona; or he could show up in a coked out daze and coach his team to a disastrous 5-0 loss to Greece. It’s hard to tell, really.

We’re also willing to bet that there will be at least one call (or non-call) that proves to be as controversial as the French handball affair, and in turn there will be demands for FIFA to introduce something that cuts down on these scandals. Finally, we can make one prediction with absolute certainty: when England is eliminated from the World Cup it will happen in a hilariously incompetent penalty shootout. 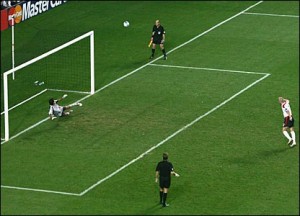 For even more in depth coverage, check out our World Cup Preview Podcast! The Gunaxin Show is classified as Explicit, so probably NSFW, unless you work here.