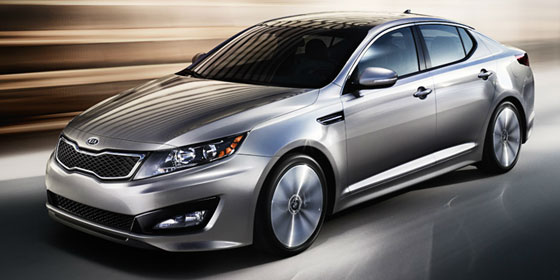 We recently had the opportunity to test drive a 2012 Kia Optima SX Turbo for an entire week. Let’s be honest, Kia isn’t the first brand that you normally think of when you are shopping for a new car, but maybe that should change. Their commercials state that the South Korean based Kia is the fastest growing car company amongst American buyers, and that the Optima is manufactured in Georgia. Having never driven a Kia before, I really didn’t know what to expect from the Optima, but I was pleasantly surprised, and I think this commercial properly sums up my experience : 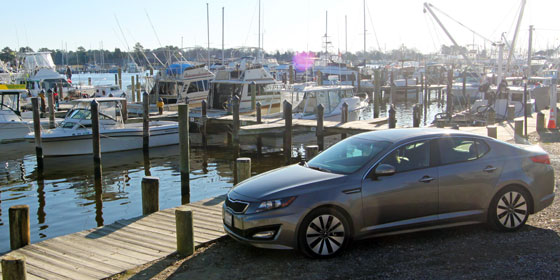 If you're like me, whenever you are driving a new type of car, you become hyper aware of cars like yours on the road, and see them everywhere. I have to say, that wasn't really the case with the Optima, as I didn't notice another Optima on the road the entire time I was driving the SX Turbo. That's not to say that the vehicle isn't noticeable, just that there don't seem to be that many of them in my area. To me, that is somewhat appealing, as I don't like driving something that everyone else has. My wife and I took the Optima on a road trip to my mother's house near the Chesapeake Bay for a pre-Christmas family gathering. I was actually approached twice, at our Hotel, and a Gas Station, and asked about the car. The exterior is stunning, and I think people we're surprised to learn it was a Kia. 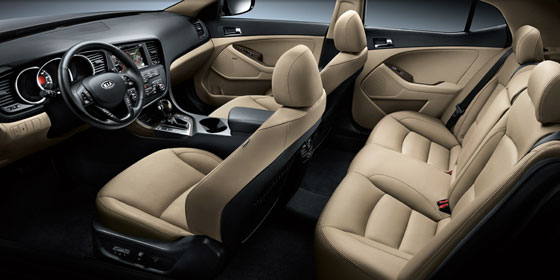 I'm a Big & Tall kind of guy, and I normally drive mid-sized SUVs. So whenever I have to drive a Sedan, I worry that I'm going to be cramped in the vehicle. That was not the case at all in the Kia Optima. I actually found it a more comfortable spacious ride than my wife's luxury sedan. Like her more expensive vehicle though, the Optima featured programmable seat memory. Although I didn't need it for this test-drive, as I was the only driver, I really appreciate that feature in her car which we both take turns driving.

I personally had no complaints with the interior and it's comfort. My wife (who is much shorter than myself) did however object to the headrest, its angle, and the inability to change positions other than height. My mother (who is even shorter than my wife) wished that she could raise the passenger seat. While the driver seat has controls to move up and down, apparently the passenger seat does not, and she felt like she was riding low, due to the high beltline and low-profile window design. 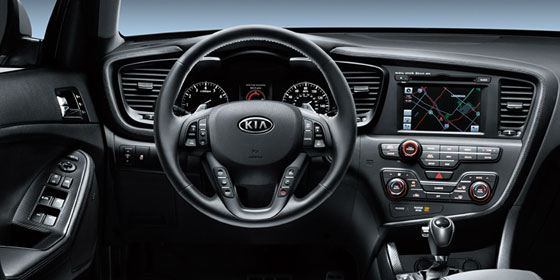 The gadgetry offered in the Kia Optima SX Turbo that I was provided included everything that you would expect in a modern vehicle of its price level. I tend to be technology oriented, so whenever I drive a new vehicle, I try to figure everything out without looking in the manual. Within two days of local driving, I was able to figure out and test every technical feature of the car. So to me, it was generally intuitive.

I especially appreciated the built-in Navigation, Bluetooth capabilities, and Dual Climate zones as my current vehicle does not offer those, and it's really a must for me at this point. The full color LCD display above the steering wheel was a new feature to me, and was a delight from the first time it welcomed me into the Kia (before you even start the car), to displaying fuel economy, and then finally saying goodbye to me when I shut off the vehicle (push button start btw).

I really had to try hard to find things I didn't like about this car. Anyone that knows me, know that's really saying something, as I'm very quick to point out opportunities for improvement in everything I experience. If I were to have to nit-pick, I would say that the controls on the steering wheel seemed a bit excessive. I love steering wheel controls, and my most recent vehicle purchase doesn't actually have them. So given the choice, I'd rather have too much, than none at all. 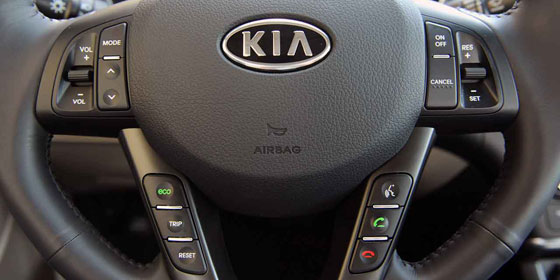 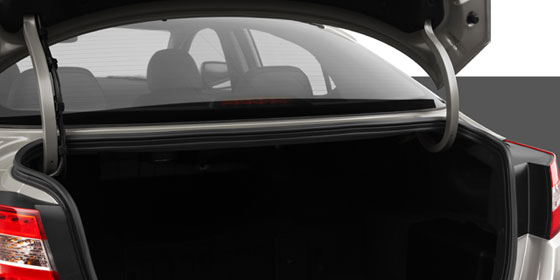 Normally I wouldn't bother writing about the trunk, as there are far more exciting aspects of this vehicle. But as I mentioned, we took the car to a family holiday gathering, which meant we had to pack both luggage and presents into the trunk. Since I normally drive an SUV, I was a bit worried that we would be able to fit everything (I was intent upon not using the backseat). The Optima's trunk was surprisingly spacious, and accommodated everything we had with us for the weekend.

I did however encounter one thing that bothered me. If you notice those arms on the hinges, they are not surrounded by anything when they move back into the trunk. Which for us (with a full trunk) meant they were hitting things as we closed the door. This required me to move items in the trunk around a few times to get it to close properly. On my wife's sedan, those trunk arms are encased, and thus don't interfere with items in the trunk. I suppose this design does allow more space, but personally I found it a bit frustrating. 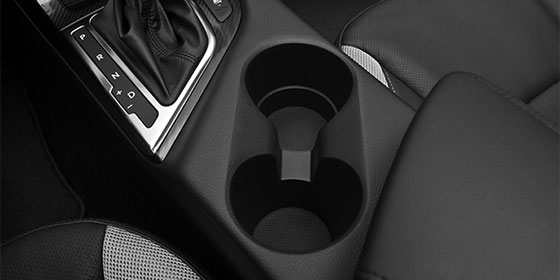 Why the hell am I writing about cup holders? To me, they were the perfect example of attention to detail in this vehicle. I've driven many cars & trucks in my lifetime, and by far these were the best cup holders I have experienced. First they were staggered and spaced out nicely, which allowed for two decent sized cups to ride at the same time. More importantly though, is that the bottoms were at different levels. So if you did have two cups that were competing for space, their lids would be at different levels. It's a small thing, I know, but it's an example of the thought that went into the design, and solves a problem that I've experienced on many other vehicles.

But they didn't stop there. As I mentioned we went on a road trip. Even when we're not on a long trip, my wife ALWAYS seems to bring along a water bottle. On those long trips we each have one, and invariably we always stop somewhere along the way too, and acquire some cups that need a cup holder. Previously we'd have to move those bottles (which bounce around in standard cup holder anyways) into the backseat. Not with the Optima though. They have little cutouts in the doors (all four of them), specially made for water bottles. 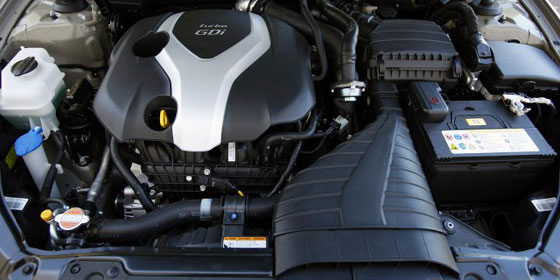 I'd probably be doing this car a disservice if I didn't discuss it's performance. I'm not a gear-head, so I can't really tell you what a Gas Direct Injection (GDI) engine is, but I can tell you that it impressed me. The 274 hp coming from the 4-cylinder turbo engine out-powers many V6 engines, while delivering better gas mileage. Gas mileage with the 2.0 turbo liter engine is an impressive 34 highway (22 city).

I found it to be very responsive and quick. Apparently it can shoot to 60 in 6.5 seconds, but even more impressive to me was the passing speeds. On the highway, if I was already going 60 and wanted to pass somebody, I could do it with ridiculous authority with the 6-speed Sportmatic manually shifting automatic transmission. My wife really didn't enjoy that part, which made it even more delightful. Overall I found it very fun to drive, and had no complaints about it's performance.

As I already stated, I typically drive SUVs, but if someone was to offer me a straight up trade for a new Kia Optima SX Turbo, I don't think I would object. There are so many features of this car that I didn't have space to cover them all here, but a few more are mentioned in this video:

I really did have trouble finding things to complain about in this vehicle, and would have no problem recommending it to friends. The model that I drove was obviously fully loaded, and had an MSRP of $30,945. If that is at the top or outside your budget, I think you could remove a few bells and whistles and still have an excellent ride. But if you're in the market for a sedan in the $30-40k price range, I think you'll be pleasantly surprised by the value offered in the fully equipped 2012 Kia Optima SX Turbo.