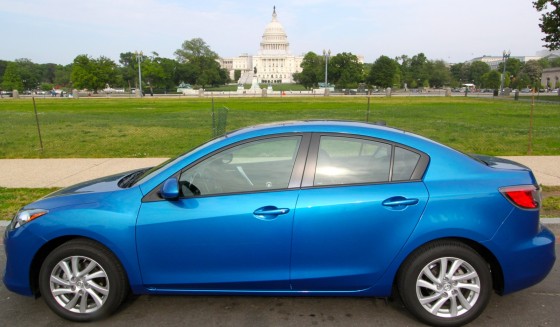 We recently had the chance to spend a week with the 2012 Mazda3 i Grand Touring 4-Door (yes, that name is probably a bit too long). As you can see from the photo above, I took the car down to DC for an afternoon, along with my typical driving around the suburbs. What follows are my observations, but first lets take a look at a recent Mazda commercial to get you oriented : 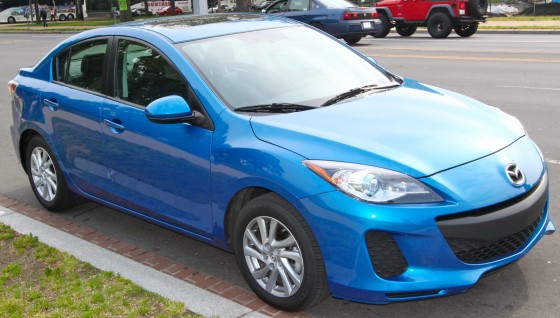 One of the first things we noticed about the Mazda3 when it was dropped off was that it seemed to be smiling at us, and enticing us to drive it. The front-end styling is distinctive and attractive. The vehicle certainly had a sporty look to it and overall was pleasing to the eyes. Personally, sky blue isn't my favorite color for a car, but my wife loved it, for whatever that's worth. This seems to be the color that Mazda uses for all of its promotional materials, I assume due to the connection to their Skyactiv brand.

I found the styling on the 16-inch aluminum alloy wheels underwhelming and a bit dated, but much preferred over the steel wheels equipped on lower models. It seems like a missed opportunity to me though, to upgrade the overall styling of the vehicle.

In the first photo below, you can see the indentation on the rear bumper that is carved out for the opening of the trunk. This placement is much lower than other vehicles we've driven, and frankly didn't seem natural to me, as I kept trying to grab onto something higher (which doesn't exist) to open the somewhat small trunk. 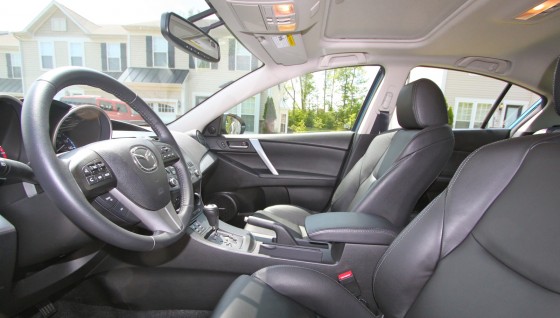 The interior overall seemed quite sporty, with its leather bucket seats, and round dashboard gauges and vents. There are controls literally everywhere, and everything lit up brilliantly at night. It was all quite impressive, and they even included blue lighting effects at your feet. The controls were also quite unique, with a center mounted tuning dial on the radio, and dual LCD screens located near the windshield which I grew to appreciate the more I drove the car. I did find myself wishing they were bigger though, to be fully effective for me. The navigation system was completely controlled by the steering wheel, and seems like it would be a big adjustment, for drivers used to touchscreen interfaces.

The vehicle we tested also came equipped with the technology package, which includes :

So essentially they dummy proof your car for $1,400 - which seems like a pretty good deal to this dummy. One other bonus that we discovered, was an extra large glove compartment, which featured an upper stationary shelf above the typical fold down door.

Unfortunately for myself, as a Big & Tall kind of guy, I found this to be one of the least comfortable vehicles I've driven. Even with the seat all the way back, my legs weren't in a comfortable position, and as you can see in the photo below, that left little to no room for someone to sit behind me. The bucket seats also did not seem to be designed with my body type in mind. I did appreciate the sliding (and locking) arm rest though, which added a bit of comfort to my driving position.

This Mazda3 came equipped with a Skyactiv-G 2.0L I4 Engine that provides 155 horsepower and 148 lb-ft torque. What the hell is Skyactiv? Yeah, we wondered that too, so we found a video which introduces the concept :

So 40 MPG sounds pretty good on the highway, but in my testing I didn't get anywhere close to that. Now granted that half my driving would be considered city (rated at 28), but the real issue is probably that I took their "Zoom-Zoom" slogan to heart. I mean seriously, why wouldn't I drive it like I stole it, if someone gives me a car to play with for a week? So the average gas consumption for the week of driving actually came out to 26 MPG for me (calculated on that previously mentioned LCD screen).

The Mazda3 was fun to drive, and seemed to have adequate power and performance. However based on the sporty styling both inside and out, and the commercial I included in the opening, I was honestly expecting a bit more under the hood, and wouldn't confuse this with a true sports car. I had no problem keeping up and passing on the highway, but I craved more Zoom-Zoom.

Overall I found the Mazda3 sporty and fun to drive. I think it provides an admirable balance between performance and fuel economy, but lacked the power I truly craved. It also packs a ton of luxury features into a non-luxury price. The model we tested totalled up to $24,970, which seems like a deal when you consider all of the advanced features (satellite, bluetooth, navigation, leather, moonroof, heated seats, etc.) included. Ultimately I personally would not consider purchasing this vehicle, since I was not comfortable in the drivers seat, however I would encourage others to check it out as a compelling value proposition.