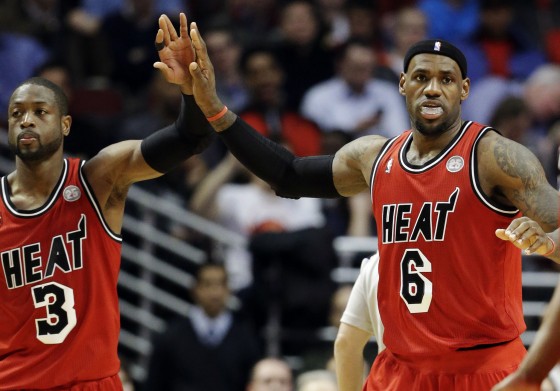 The NBA season is approaching quicker than a Kim Kardashian marriage and thank goodness, we are ready for it. The 2013 offseason was all about change. Dwight Howard, Paul Pierce, Kevin Garnett, Jrue Holiday, Tyreke Evans, Andrew Bynum, Josh Smith, OJ Mayo, Al Jefferson, Kevin Martin, Monta Ellis, Brandon Jennings, and Andre Iguodala will all be wearing different uniforms this season.

Many teams will be finding themselves back in the thick of a playoff run while others will not. Teams like the Lakers might end up battling to regain their pride from last season’s failed Dwight Howard experiment. But also teams like the New Orleans Pelicans might even become a playoff contender in the Western Conference. But with all the changes, will we see a new team on top the rankings? Or will the Miami Heat continue their run and win a coveted 3-in-a-row? 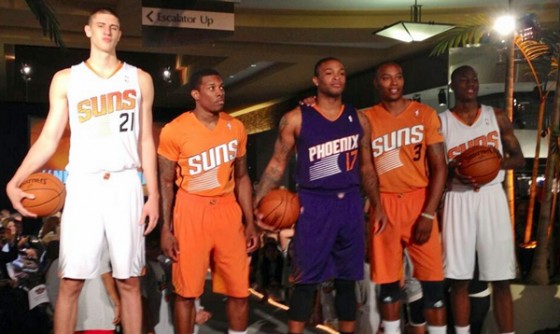 Winning has nothing to do with exciting. The Suns are going to be a fun group to watch this year but that rarely translates into wins.

When you have the face of the franchise, you don’t trade him away. However, the 76ers continue to do so. First with Andre Igoudala and now with Jrue Holiday. Eventually, they are going to have to hold on to somebody.

The bottom of the NBA is a who’s-who of mediocrity. Any one of these teams will end up drafting #1 overall next year, it is just a matter of how high their odds can climb.

Poor Rajon Rondo. The guy has been talked about for years as trade bait but always managed to stick around and stay with the Celtics. He is probably hoping a trade would happen now that the Celtics have lost three of their top five scorers from last season. It might get ugly real fast in Boston.

Michael Jordan is finally making the right decisions. They went out and signed Al Jefferson which shocked a lot of people. Why would one of the NBA’s biggest free agents sign with a team notorious for losing? Maybe he has a plan to help turn this franchise, and soon to be Hornets, around. MJ has one.

The Kings could end up like the Hornets from last season. They have enough talent to win a few games but they just don’t have enough to make a run just yet. DeMarcus Cousins and Marcus Thornton are underrated athletes that deserve more love. Sacramento is another two seasons away from climbing these rankings.

It shocks us to see the Jazz climb this high in the rankings after the off-season they had losing Al Jefferson, Randy Foye, Mo Williams, and Paul Millsap. No other team in the NBA will be dealing with the loss of their four best players but the Utah Jazz have some young talent that could keep them at as close to .500 as they will be this season.

The best thing going for the Raptors is that for the second consecutive season, they will have the same exact starting five. Landry Fields has to find a way to produce like he did in New York. He made a move to Toronto but left his game in NYC. This team could end up making a few upsets and even sneak into the playoffs, they just need to step it up defensively. It can happen.

The Milwaukee Bucks are going to be a stronger team in a couple of years once the big three (O.J. Mayo, Brandon Knight, Carlos Delfino) they just picked up in the offseason have some time to play together. But those three guys will not be able to carry this team. They are still missing a couple of big men to play along side Larry Sanders.

It appears the Dallas Mavericks are almost to the end of their run with Dirk Nowitzki. If the Mavs are struggling by the All-Star break, do not be shocked if they go ahead and trade Dirk off to another team for some draft picks and younger talent. This is the best time to move on and walk away with something instead of letting him become a free agent and receiving nothing. 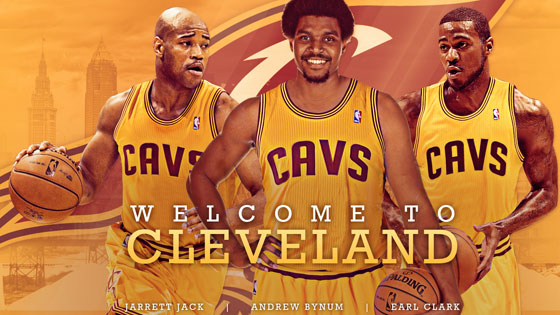 Kyrie Irving will be one of the best overall players in the NBA in the next five years. His time is slowly coming and he has loads of talent to help him climb the ladder of success. Tristan Thompson and Dion Waiters can make this team scary to defend. C.J. Miles and Jarrett Jack add to the depth of a team that might end up winning 42 games.

John Wall and Bradley Beal form one of the most dynamic backcourts in the NBA. With the addition of Otto Porter, this team can turn into one of the younger surprises in the NBA, if they want to. Defensively, they have Marcin Gortat and Nene in the front court and Trevor Ariza coming off the bench. No one is saying playoffs but this team is inching their way closer each season.

Even if Kobe Bryant returns next season, that doesn’t guarantee a playoff spot. But without him, they can go ahead and find themselves sitting at the bottom. This Laker team will live and die on Kobe Bryant. That was proven last season.

Brandon Jennings has a new home in Detroit along with Josh Smith so the scoring will increase on day one. Andre Drummond and Greg Monroe come together to form one of the best young front courts in the NBA, as long as they can stay healthy.

The Atlanta Hawks have always been the team to consistently make the playoffs but then end the season in the first round. It isn’t fun making the playoffs every year and going home in six or fewer games. So they rid themselves of Josh Smith and Devin Harris but added a couple of good low post defenders in Paul Millsap and Elton Brand.

Two of the best moves of the 2013 NBA off-season go to the Denver Nuggets when they signed Nate Robinson and J.J. Hickson. By adding Hickson, they can now allow Kenneth Faried to play the Power Forward position he was born to play. And don’t be worried about Iguodala leaving town, they will be just fine. This team still has the talent to score between 110-120 points a game.

Mo Williams isn’t exactly the final piece of the puzzle but he will help Damian Lillard get some much-needed rest. It might not take too long before this team comes together and starts to make a run. They added Robin Lopez to replace J.J. Hickson and Nicolas Batum has become a solid Small Forward. This team is built for 40 wins.

Why not? Most teams spent their off-season working on improving one or two spots, the Pelicans did a complete overhaul acquiring Jrue Holiday, Tyreke Evans, and Anthony Morrow to play along with one of the leagues most promising young players, Anthony Davis. It might not translate into early season wins but if everyone stays healthy, this team could shock some people. Especially with one of the league’s best scorers Ryan Anderson coming off the bench.

Why do the Knicks fail to hit the next level season after season? What is missing? They went out and signed Metta World Peace, score. Then they traded for one of the NBA’s deadliest secret weapons Andrea Bargnani. There is enough depth to make a run this year and they know it. In fact, they better do it now. Time is running out for this team.

Defense wins championships and Memphis knows it. They held opponents under 90 points a game last season, best in the NBA, and kept the team together for one more year. Four of their starting five have played together for four seasons and they bring back Tayshaun Prince for another season. They aren’t fun to watch offensively but they are exciting to see break down the best offenses in the NBA.

After finally signing Nikola Pekovic to a big contract, the Timberwolves are now a team to beat. Kevin Love and Ricky Rubio can carry a team but Pekovic, Corey Brewer, and Kevin Martin can bring home a title. This team might just be underrated at the tenth spot on the rankings. Watch out.

The LA Clippers are finally the best team in LA. Too bad for them that adds a whole new level of pressure to their season. Blake Griffin is fun to watch but he needs to become more than just a slam dunk contestant to push the Clips to the next level of the NBA élite. They will win a ton of games this season, don’t get us wrong, but they will not be playing for a title.

Derrick Rose is back. Last season the Bulls won 45 games and even made it to the second round of the playoffs without him. The Bulls will not be going anywhere but up on these rankings.

There is no way this team is going to work. Deron Williams is arguably the best point guard in the NBA but he is also a scorer. Joe Johnson is a scorer. Paul Pierce is a scorer. Brook Lopez is a scorer. If Deron can figure out how to get all these guys their shots, this team will be ridiculous. If not, we might have a 41-41 club.

Dwight Howard, James Harden, Chandler Parsons, Jeremy Lin, and Omer Asik. If you can put those five guys on the court at the same time, you can’t lose. Dwight made the correct decision coming to Houston and when they make it to the Finals, he will laugh in the haters faces from afar.

As long as Greg Popovich is the head coach in San Antonio, they will be a top ten team. Coach Pops has won 50 or more games every single season since 1999. In fact, since 1999, the Spurs haven’t finished worse than second in their division and have won it nine times. He is the best coach in the NBA.

Obvious guy says that the Warriors are going to be the most powerful offense in the NBA since the Nuggets in the late 70’s. They have plenty of scoring but can they produce enough defense to make a run at a title? Obvious guy thinks so.

No one knows how Russell Westbrook is going to bounce back following his season ending knee injury last year but with Kevin Durant on the roster, you can never count the Thunder out. In five years, KD might surpass King James as the best in the game. Winning a championship is a good start.

Hate all you want, the Heat almost found themselves watching the Finals from home last year thanks to the team you see ranked one spot above them. Don’t get me wrong, the Heat are going to win 60-65 games this season, they just might not end up making it back to the Finals for the fourth year in a row. That is a tough thing to do for any level of talent. 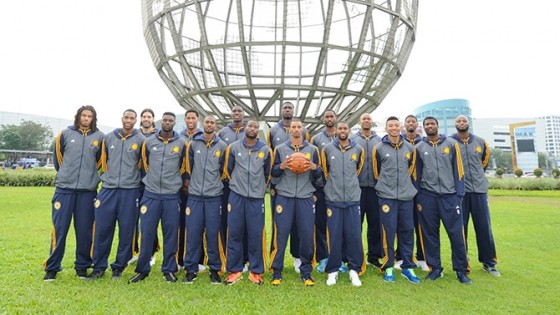 The Indiana Pacers went 49-32 and came within one game of the NBA Finals and they did it without their best player, Danny Granger. So what did they do in the off-season? They kept the team together and added Luis Scola and Chris Copeland. This team is going to be scary good and will end up in the NBA Finals thanks to a sick defense.