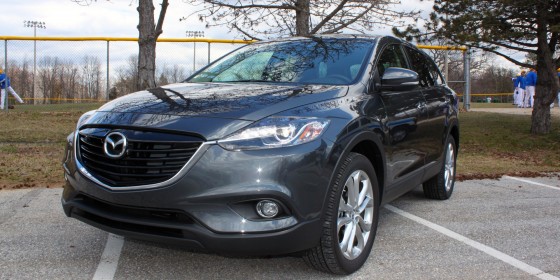 We recently had the chance to spend a week with the 2013 Mazda CX-9 Grand Touring AWD Crossover. The CX-9 is Mazda’s largest and most expensive vehicle, seating up to 7 passengers. As you can see from the commercial below, their goal was to create a vehicle that is…

Spacious, yet quick and agile. Seriously stylish, but also incredibly practical. Luxurious, yet still within reach.

What follows are our observations of the vehicle after spending a week playing with it in Maryland. We put over 500 miles on the CX-9, and with family visiting from out-of-town, we had both child and adult passengers riding in the back for many of those miles, which isn’t typically the case when we test these vehicles. 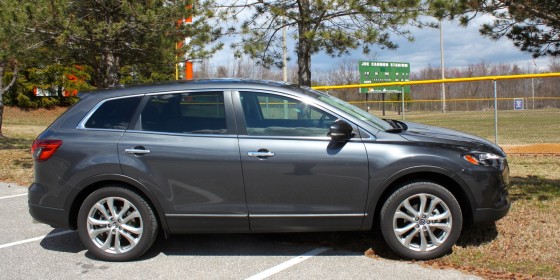 The exterior styling is a strong selling point of the Mazda CX-9. The front end in particular is strikingly sporty, and the overall design aesthetic was pleasing. While we typically prefer our Utility vehicles to be more rugged, it was obvious from first glance that this was a more sophisticated take on utility.

The headlight package was particularly stunning, with Bi-Xenon HID headlights, LED daytime running lights and halogen fog lights. The 20-inch wheels, while desirable to some, require low profile tires which aren’t really suitable to most forms of rough terrain. That is one area where sacrificing function for style isn’t a choice that we would make, but most people who would purchase this vehicle probably don’t have our same concerns.

With subdued color choices and a familiar body shape, the CX-9 doesn’t scream, “Look at me!” However for those who do give it a look, they’ll surely notice the sleekness and understated luxury. Lastly, we have two concerns about the doors. The rear doors seemed wide, and likely to be a problem for kids who don’t pay attention to their surroundings (All Kids). Also, the rear lift gate may have been adjustable somehow, but we could get it to open up high enough for folks over six feet tall. 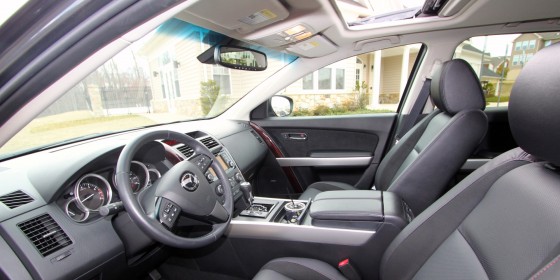 Immediately upon climbing into the CX-9, we noticed the luxurious finishes, with chrome and wood accents, and a few cows worth of leather. Even more-so than the exterior, the interior delivered on the luxury mentioned in that commercial we watched. The exception to that however was the sunroof, which was much less impressive than what we’ve seen from other car companies.

Unfortunately the second thing we noticed was a very bulky center console. It gave us a very boxed in cramped feeling to our hips and legs. Surprisingly that didn’t bother us as much as we suspected it would, after 500 miles to get accustomed to it. The center console also houses an ingenious split top storage compartment, which allows your driving companion to keep their arm on the rest while you access that storage space. Unfortunately their isn’t as much space in the center console as you would hope for with its bulkiness, and the deep cup holders seem to swallow smaller sized beverage vessels.

Driver seat memory is a nice inclusion, however button positioning (at the bottom of the seat) is not convenient when standing outside the vehicle. Anyone who uses seat memory to account for nearly a foot height difference in drivers would realize that these buttons are almost always pressed before sitting down. Overall the seats were more comfortable than the Mazda3 that we drove previously, and the suede accents were a unique styling feature.

Rear seat configurations were able to accommodate our family well, and with the 3rd row folded flat into the floor, the cargo area was surprisingly roomy. The in-floor storage in the back was also a nice bonus for hiding things or keeping your emergency road supplies out of the way. While we’d pity an adult who gets stuck sitting in the 3rd row, kids seem to enjoy climbing back there and being out of reach from their parents. 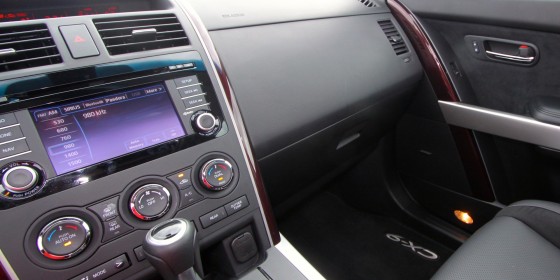 Typically our favorite part of modern vehicles is the technology included. The Mazda CX-9 Grand Touring is no exception with its 5.8″ touchscreen, HD & Satellite Radio, Pandora, Bose sound system, Bluetooth, Navigation, back-up camera, blind spot monitoring and steering wheel controls. It checks off all of the major boxes for us, however the entire system was less impressive than others we’ve seen mainly due to the size of the screen and the interface. The navigation system was frustrating to use, and we abandoned it for the GPS on our iPhone.

The multi-zone climate system is starting to become a must-have feature, and the CX-9 does indeed include it. However even when we disabled the rear system, it appeared that the kids were able to override it. This can obviously lead to children playing with it, and arguments, so we’d investigate that further if that’s a concern for you.

Overall the controls were easy to understand and use, and while the gauge cluster lacked the secondary LCD screen we’ve grown to love on other vehicles, it still got the job done. Push-button start is another feature we’ve seen on most vehicles we’ve driven recently, but Mazda seems to have a different take on that. It utilizes a proximity censor key fob, but you still have to turn a key like object instead of pushing a button, which seemed a bit odd. 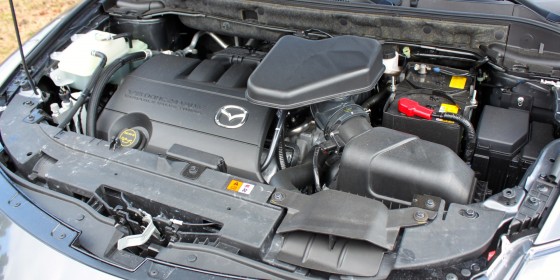 All 2013 Mazda CX-9 models are equipped with the same 273-hp, 3.7L DOHC 24-valve V6 with 6-speed Sport automatic transmission. As the commercial stated, we found the CX-9 to be quick and agile. It didn’t feel like we were driving a 7-passenger vehicle and we had no complaints about its performance over our 500 miles of testing. Handling was excellent, and overall it was fun to drive.

Gas mileage is rated at 16/22, which is fairly typical for CUVs in this class. The model we drove featured Active Torque Split All-Wheel Drive (AWD) along with Dynamic Stability Control (DSC) and Roll Stability Control (RSC). Since we didn’t flip it, we’re going to assume it works. 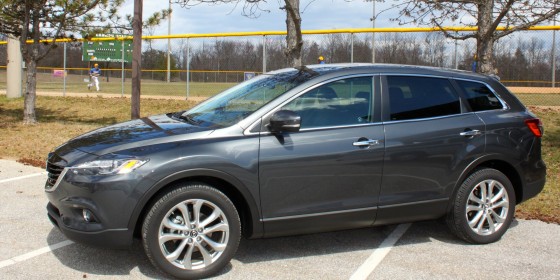 Overall we found the 2013 Mazda CX-9 Grand Touring a luxurious vehicle that was fun to drive, yet practical. Since that is what they were aiming for when they made it, we’ll consider that a success. We certainly found some items of concern, and at nearly $40,000 for our fully equipped test drive model, you may want to consider other options if the items we cited are of importance to you. If however you’re looking for a good looking well-rounded vehicle that does many things well, then add the CX-9 to your test drive list.