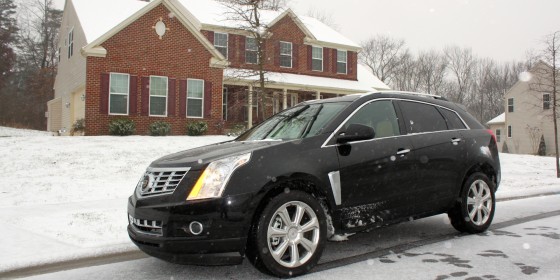 The 2014 SRX is the distinctive luxury crossover from Cadillac. The bold front-end styling is usually the first thing noticed about this elegant take on the crossover, but after spending a week driving the SRX in winter weather, we were left with alternate first impressions. We borrowed the 2014 Cadillac SRX AWD Premium for some holiday driving in mid-December, and the early bout of winter weather on the east coast made it tough to capture many good photographs, but served as the perfect test for some of the SRX’s features. 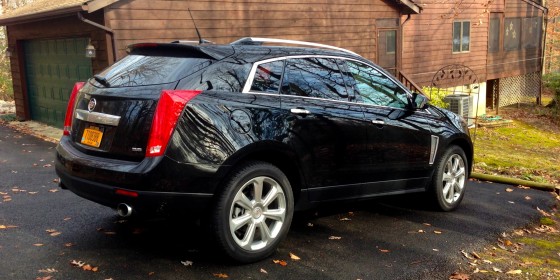 Before the weather turned too terrible, we were able to enjoy the performance and luxury of the SRX on mostly dry roads for a day. While it took a bit of acclimation time, the CUE (Cadillac User Experience) infotainment system quickly became one of our favorite features. The fully touch controlled interface is something that you truly need to experience first-hand for yourself in a dealership. It’s a delightful modern take on the center console stack.

We quickly turned our attention to attempting to keep ourselves warm in the SRX though. We’ve not previously had the occasion to test a heated steering wheel before, and let us just say we’ve been missing out. Everyone knows it typically takes awhile for vehicles to warm up and for the heating to start being effective. The heated steering wheel and seats on the SRX helped solve that problem, and were able to warm us in a way that didn’t require blasting hot air in our faces from the vents. It was great to remove the gloves and warm your hands instantly while driving.

However the SRX didn’t just excel at keeping us toasty warm, it provided a safe ride in the treacherous conditions. From the AWD (All-Wheel-Drive) drivetrain to the limited slip differential and Stabilitrak, we felt comfortable trudging through the snow to all of our destinations. We could also see where we were going without any problem, with the automatic wipers and headlights. Those sexy headlamps even automatically deployed high-beams when necessary. 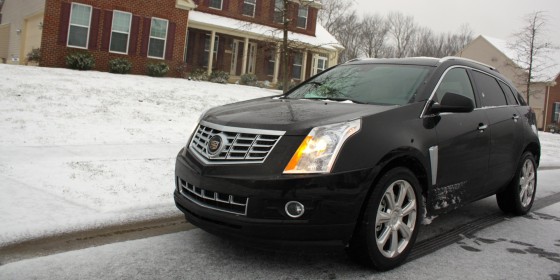 Technology in cars has advanced so much over the past decade, especially in luxury vehicles, that we sometimes step back and wonder who would need all of those features. However when presented with an occasion to truly test and experience the luxury and safety that those advanced features provided on the 2014 Cadillac SRX, we wondered how we would ever do without them again.