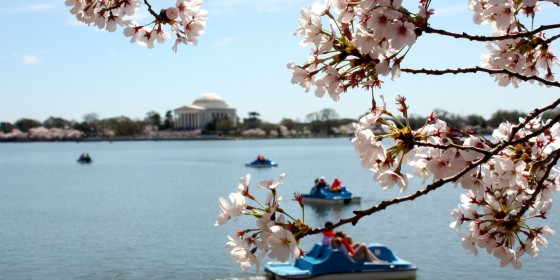 Today, on the first day of Spring, the National Cherry Blossom Festival returns to Washington, DC. It’s an amazing annual tradition that has been updated in the time of COVID, but it’s mostly outside anyways, so get out there and check it out! In 2014 we visited the National Cherry Blossom Festival and Parade, and for those unaware of the big event in our Nation’s Capital, allow the wiki folks to explain :

The National Cherry Blossom Festival is a spring celebration in Washington, D.C., commemorating the March 27, 1912, gift of Japanese cherry trees from Mayor Yukio Ozaki of Tokyo City to the city of Washington. Mayor Ozaki donated the trees in an effort to enhance the growing friendship between the United States and Japan and also celebrate the continued close relationship between the two nations. Giant colorful helium balloons, elaborate floats, the energy-filled Parade, marching bands from across the country and a grand spectacle of music and showmanship seen only once a year are parts of the Festival. – Wikipedia

That year “peak bloom” of the beloved cherry blossoms fell on the same weekend as the festival’s biggest event, which led to huge crowds in the district. Gunaxin was there for the festivities and captured the gallery below :