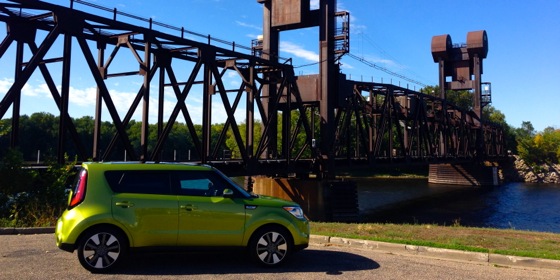 The 2014 Kia Soul has an all-new take on design, driving dynamics and desirable features that totally transforms one of Kia’s best-selling cars into an urban utility vehicle that is as comfortable in the city as it is on the open highway. You’ve likely seen this latest Hamster commercial, which apparently indicates the new Kia Soul is totally transformed, and not just that it has lost weight:

Recently we were invited to Minneapolis to experience that new refined Kia Soul firsthand, and we drove it on a variety of roads both in the city, and along the Mississippi River. What follows are our observations accompanied by photos we took along the journey. 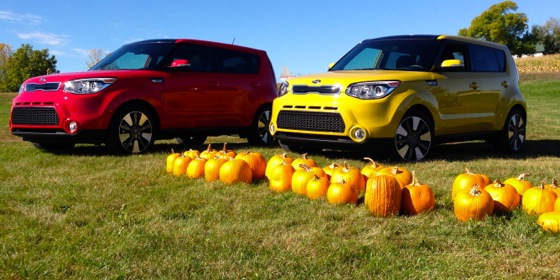 The signature Soul design is instantly recognizable yet thoroughly fresh with inspiration from last year’s Track’ster concept. We’ve always been fond of Soul’s unique look, and were glad that the update didn’t ruin it. Sometimes manufacturers make updates to styling that make you scratch your head, and wish they had kept it the same. That is certainly not the case with the 2014 Kia Soul, where they’ve taken a good thing, and made it even better. 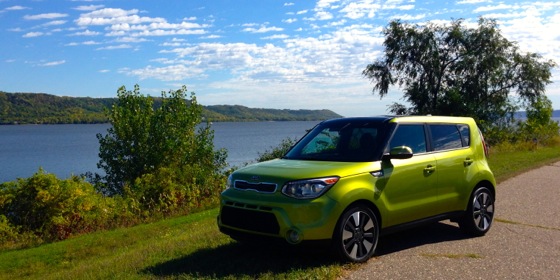 “The all-new Soul was one of the more difficult assignments we’ve taken on,” said Kearns. “Striking the right balance between the wonderful design of the current car with the audacious proportions and stance of the Track’ster was daunting. It proved to be a truly collaborative effort with guidance from Peter Schreyer in Frankfurt and assistance from our studio in Korea. In the end, we’ve kept the essence of Soul while infusing it with more presence inside and out.” 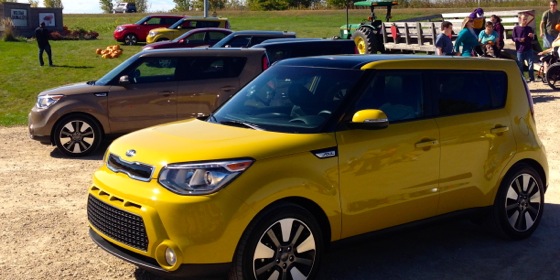 While there are significant changes to the styling, the most important updates to the Soul are the improved driving dynamics. Riding on a new chassis that is stiffer, longer and wider, the all-new Soul feels more solid on the road. The changes allow for more passenger and cargo room at the same time, and the Soul feels much larger in the inside than it looks on the outside. With two large men spending the entire day in the car together, we never felt cramped or uncomfortable in the Soul. 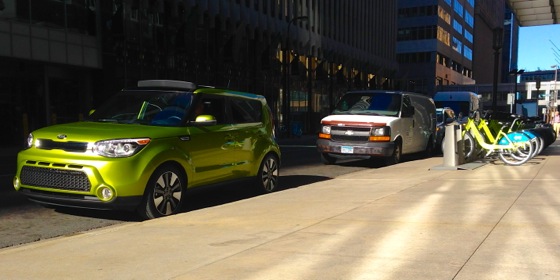 The Soul was noticeably responsive in the city, especially considering its engine size. A flatter torque curve and significant suspension upgrades make the 2014 Soul a nimble and agile companion in congested urban environments. It’s typically asking too much to expect great performance from a small car with a small engine, but we were certainly not disappointed with how it handled the open road either.

The model we drove was equipped with a 2.0-liter GDI four-cylinder engine. Power is rated at 164 horsepower at 6,200 rpm and 151 lb.-ft. of torque at a 4,000 rpm. The engine has been tuned to provide more low-end torque (nine percent more torque at 1,500 rpm on the 2.0-liter) for an improved around-town driving experience. 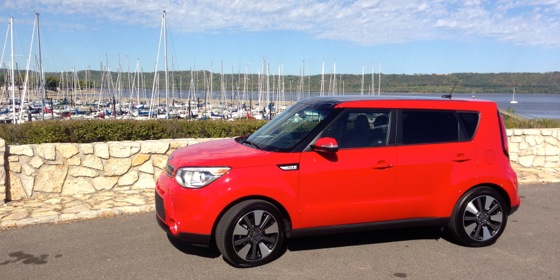 With all of that goodness, its notable that the interior of the car has been significantly refined as well. The star of the show is the new instrument panel featuring an 8-inch screen which puts many other manufacturers to shame with it’s interface and clarity. Overall, the design team paid particular attention to instilling a more premium look and feel to the 2014 Soul’s interior, incorporating soft-touch materials, leather-trimmed seating, and high-gloss trim pieces.

Overall we were left impressed with the 2014 Kia Soul, and how much car it offers for its relatively low price tag. The fully loaded model we drove priced out at about $25,500. It’s easy to see why the Soul has been such a winner for Kia, and we think they’re positioned well to continue that success with this new model. We can’t wait to spend more time with it in order to bring you a more complete review.