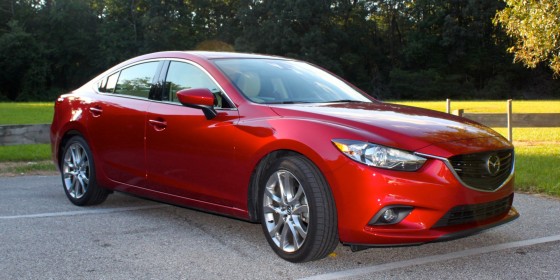 The Mazda 6 is a mid-sized sports sedan that has been fully redesigned for the 2014 model year. The Grand Touring version is the highest trim level offered, and we recently had the chance to spend a week putting it to the test. We took the Mazda 6 on a road trip to Redskins Training Camp in Richmond, VA and what follows are our observations from our time with the vehicle. We’ll start with a recent commercial though, to help you understand what a break through Mazda considers this update to be to their lineup : 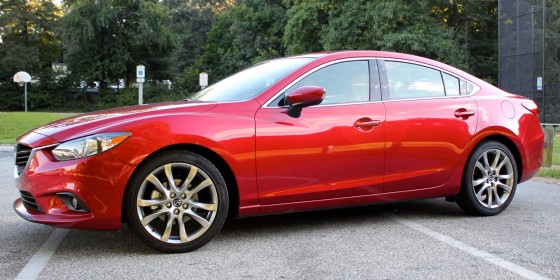 There is no argument about it, the 2014 Mazda 6 is a sharp-looking car, especially in Soul Red. Sometimes vehicles are brought to us for a test-drive that fail to excite us, with underwhelming styling and boring colors. That was definitely not the case with this beautiful Mazda 6. First impressions are everything when it comes to the exterior of a car, and at first glance we were smitten.

The front end is striking and sporty, and the front fender line that extends onto the front doors is pure sex. We wish the same design aggressiveness was carried into the rest of the exterior sculpting, but that does seem to be a common issue among many manufacturers currently. The rear end is attractive and stylish but lacks some of the flare that makes the front end so successful.

The wheels are a fairly typical design for Mazda, and while certainly not our favorite, we found this design more appealing than those on the 2012 Mazda 3 that we previously reviewed. Of the colors offered on the Mazda 6, Soul Red is definitely our favorite, but we wish that all manufacturers would get more aggressive with the color palette. 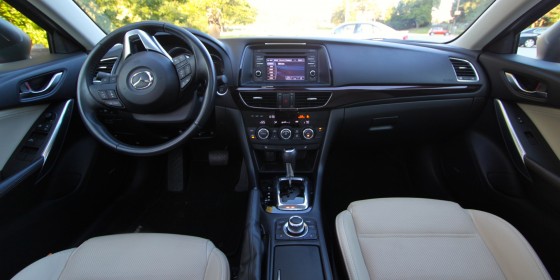 Getting into the Mazda 6 is a bit tough for this Big & Tall driver, but once secured in the driver seat, the car was much more comfortable than its little brother. The two-tone leather seats and door treatments were a definite highlight, although we’d be concerned about keeping those almond seats clean. As we noted when reviewing the CX-9, seat memory is a great feature, but the inconvenient location of those buttons is puzzling.

The Mazda 6 Grand Touring included most of the technology that we’ve come to expect in every new vehicle on the market; push button start, adjustable steering wheel, steering wheel controls, dual climate controls, blind spot monitoring, bluetooth, navigation, heated seats, and much more. In general the dash layout was intuitive and attractive, and we didn’t have any trouble figuring out how to work all of the included tech.

The 5.8″ touch-screen is really too small for the vehicle, and the design is a bit puzzling. It’s surrounded by buttons, while those same features are included with a click-wheel on the center console. We appreciated the functionality of the click wheel, and wish they would ditch those other buttons and make the screen much larger. The Tom-Tom navigation was both helpful when it was offering routes around traffic, and frustrating in its interface and lack of warning about turns. It’s likely we didn’t have it configured properly, but it gave us constant updates about traffic and our arrival time, but didn’t once announce a turn for us.

We enjoyed rocking out with the 11 speaker Bose Centerpoint surround Sound audio system in HD Radio, XM, and Bluetooth streaming. The audio sounded great, but the interface for the infotainment system could have been more user-friendly. 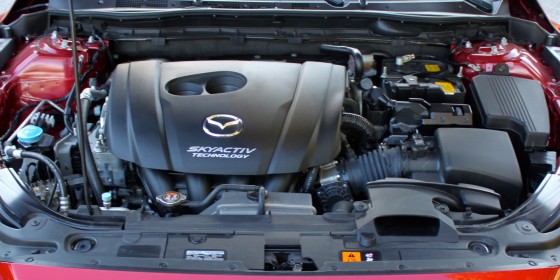 The 2014 Mazda 6 comes with a 184 hp 2.5L SKYACTIV-G DOHC 16-valve 4-cylinder engine. Yeah, 4-cylinders in an mid-sized sports sedan isn’t really our idea of zoom-zoom either, but it was surprisingly capable. Though the noise coming from the engine seemed mis-matched with the body design that was encasing it. We would have certainly appreciated more power, but overall the vehicle handled itself well, was fun to drive, and didn’t feel overly sluggish.

The payoff comes when you consider gas mileage though. The Mazda 6 is rated at 26mpg city and 38mpg highway. As you can see in our photo of the instrument cluster above, after over 5 hours of driving in a variety of conditions, we averaged 33.2 mpg. Believe us when we say that we’re not light on the throttle either, we’re not typically driving in an efficient manner. So that 33.2 mpg is an impressive figure, and clearly justifies what we consider to be an undersized engine. Madza’s engineers are clearly more sensible than we are. 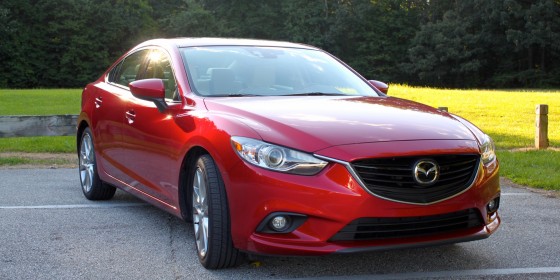 Overall we enjoyed driving the 2014 Mazda 6 Grand Touring. The exterior styling turned heads, and the interior kept us relatively comfortable and surrounded by modern technology. The combination of style and gas mileage seems like an appealing package for many drivers, and an exciting direction for car manufacturers in general. Delivering north of 30 mpg in a sports sedan without the cost of a hybrid or electric vehicle is a definite selling point.

The model that we tested priced out at $31,490 which certainly isn’t cheap, but considering everything included, seems like a decent value. For that price we’d normally expect a larger touch screen, but we’d have no problem recommending the Mazda 6 on your test drive list. If you do end up buying one, definitely spend the extra $300 to get it in Soul Red. You’ll thank us later when the ladies swoon.

A sexy sports sedan that averages over 30 mpg for about 30k.