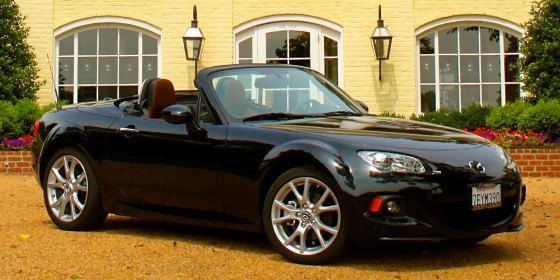 It’s been 25 years since Mazda introduced the Miata to the world. While they prefer that you call it the Mazda MX-5 now, it is firmly planted as a favorite in hearts and minds of fans all around the world, and it’s considered the most-raced production car in the world.

So as Mazda prepares to unveil the 4th generation of the classic roadster on September 3rd, we were delighted to get some time behind the wheel of the outgoing model. We recently took the 2014 Mazda MX-5 on a 25th Anniversary road trip to the Inn at Willow Grove in Central Virginia, and since this isn’t your typical car, we decided not to do our typical feature. Instead we’re going to take you on our trip with us, via Instagram photos that we shared from the road…

My first concern as a big guy when offered the MX-5 to review for a week was whether I’d be able to fit in it, let alone drive it comfortably. As you can see from the photo above taken in National Harbour, MD… a big man can drive a Miata. Honestly it wasn’t nearly as bad as I thought it would be, and it wasn’t even the most uncomfortable I’ve ever been while driving a car. After putting over 500 miles on this vehicle in just over a week, the fun of driving it was never overpowered by my discomfort behind the wheel. In fact getting in and out was more of a problem than actually driving it, especially with the top up. However as you’ll see in the photos below, we didn’t really have the top up much at all, and why would you?

The photo above was taken in Virginia wine country, and we were obviously frustrated by this hard-working American blocking our road. Once we got off the highway (where the tiny little convertible was noticeably over-matched by big trucks and bad paving) it was an absolute joy to drive the Mazda MX-5, and we didn’t want anything to slow us down. Never have we felt more connected to the road, and more alive while driving a car. It reminds us of the first time our parents let us drive a Go-Kart at the beach; low to the ground, responsive, open-aired, and awesome!

Here we are arriving at James Madison’s Montpelier. Posing this roadster for photos that require you to drive off the road was a bit challenging, as the ground clearance is very minimal. In the end we got the shot, and didn’t break anything. As much as we delight at driving over anything and everything when behind the wheel of an off-road capable vehicle, we were equally delighted by swerving to avoid pot-holes and sewer caps. The nimbleness of the MX-5 made traversing even neighborhood streets feel like we were riding a Grand Prix.

Here we’ve arrived at the Inn at Willow Grove, and posed for our favorite photo from the trip. The Mazda MX-5 looks right at home in this luxurious setting, although we know it starts at a reasonable 28k. We were even asked about how we liked it from another guest at the Inn, who happened to be driving a BMW Z4 at roughly twice the price of the MX-5.

You’ll notice we don’t really include any photos of the interior in this feature, it’s for good reason. There isn’t much to say, it’s minimalistic, and frankly a bit outdated. This might bother us more if we weren’t having so much damn fun driving the car, which we suppose is the point. The joy comes from driving it, not from an infotainment system.

There isn’t much room for cargo in the MX-5. We had just enough space for our luggage on an overnight trip, so we would have to pack much lighter if we were taking it away for a few days. Much of the room behind the seats is taken up by the retractable hard top, which also doesn’t leave too much space for a gas tank. Such a small car doesn’t really need much gas we suppose, and the ten gallon tank holds enough to take you about 250 miles. While we weren’t able to fill up at this old Esso station, we did find some cheap gas in central Virginia.

Our final stop of our road trip was Barboursville Vineyard for a tasting. Don’t worry, we didn’t drink and drive. Once again this little roadster looks right at home overlooking a vineyard. The top is down, the sun is out, and lucky for us, Mazda included some sunblock in a gift bag on the front seat. How many gallons of sunblock do you think Miata owners have used over the past 25 years?