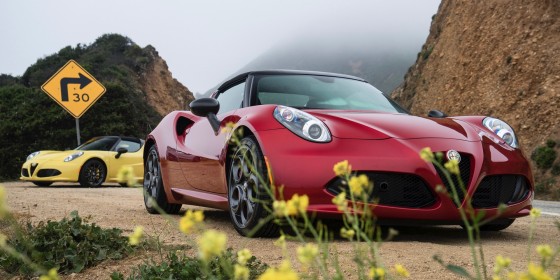 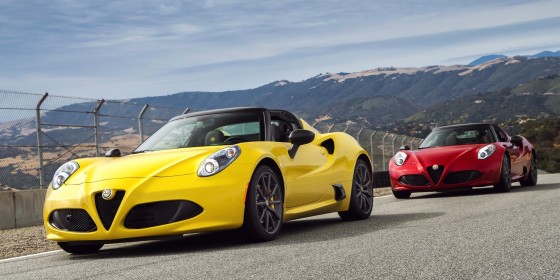 The first thing one notices about the 4C when seeing it in person is how truly tiny it is. Its dimensions aren’t much larger than a Smart car and the 4C makes most compact cars look massive by comparison. Yet in this tiny car is enough style and excitement to fill volumes.

The Alfa Romeo 4C is balanced with the rear of the cabin and seatbacks at the center of the car, putting the cabin and short hood in the forward position and the engine and trunk hatch to the rear. This simple layout sets the canvas upon which legendary Italian artistry begins. 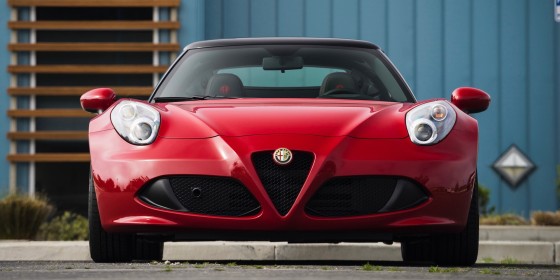 At the front, the fascia is split into three portions, with two low, wide-mouthed intakes flanking the signature Alfa Romeo upended triangle. The V-shaped split that this creates is carried in accent lines that run up the fascia and over the hood to edge the windscreen and begin the beltline at the sides. To either side of this bulge are the wheel humps, the front of which are adorned with three-piece headlamps. All together, this creates a fast-flowing motion across the front of the car that, when seen in the rearview, promises an imminent pass and gives the tiny car a more aggressive intimidation factor than its size would warrant.

From the side, the fender and the hood’s V meet near the windscreen’s pillar and begin the beltline, which runs off those flat-topped fenders. The beltline curves upward to create the rear pillar near the end of the door, but a hint of it remains straight to accent the outward-reaching bulge of the intake that begins the strong rear fender. Widened wheel wells and a slight power curve on the rear fender denotes that the turbocharged engine behind the cockpit sends all of its muscle there.

Below, on the door, just below the rearview mirror, another cut line begins, pushing out from the door and curving upwards to create a swoop for the rest of the intake’s form. Below that, at bottom, is a running board line that ends at another scoop to supply cooling air for the rear brakes.

To the rear, many more lines begin to converge in a powerful cacophony of style. The rear pillar lines, fender bulge, and the curvature of the integrated spoiler behind the hatch-style deck and lid are both strong styling points and purposeful aerodynamic inclusions, as is the rounded rear fascia. It’s a sleek, strong look that’s accented by the round taillamps, twin exhaust tips, and a slightly upward-pushing rear underpan with its vortex fins.

Without a doubt, the Alfa Romeo 4C is one of the most beautiful sports cars on the market. 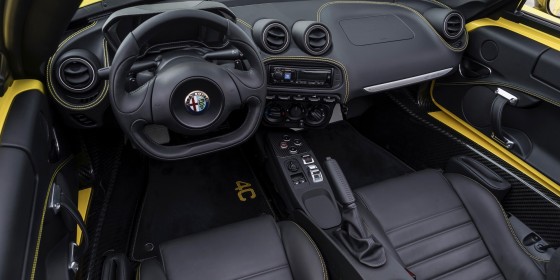 Inside the Alfa 4C is a compact, purposeful cabin. The dashboard is simple, but eye-catching. Flowing curves run from one side to the other like a race track, stitched in red across black leather (part of the optional Leather package), with strong curves running around the circular vents at either end of the dash. This stitching is seen around the driver-canted controls interface at center.

On the driver’s side, a flat-bottomed racing wheel dominates. Behind it, the instrument cluster rises above the leather dash, curving in a three-piece set wherein gauges are shown. Below the dash, aluminum pedals hinge from the floor in a tight formation made for heel-toe action.

The carbon fiber is seen throughout the cabin, left uncovered to reduce weight and showcase the car’s lightweight, speed-centric reason for existence. Shifting is a simple series of buttons and paddles on the column. A large handbrake and varied switch controls cover the center portion below the tiny Alpine stereo.

Carbon fiber seat frames have little adjustment, beyond sliding fore and aft and no tilt at all. Yet fitting into the 4C, even for a large person over six feet, is not a futile exercise. The car is well worth the slight sacrifice in comfort and the bolstering on the seats is phenomenally well-tuned for spirited driving on and off the track.

Those expecting convenience in their car will be sorely disappointed with the Alfa 4C’s interior, however, which has no glove box, a drink holder sitting right where the driver’s elbow wants to be, and no infotainment at all. The Alfa Romeo 4C is about going fast, hitting corners hard, and having full engagement in the phenomenal driving experience it offers. Boring freeway road trips and parking in commuter traffic are things meant for lesser cars. 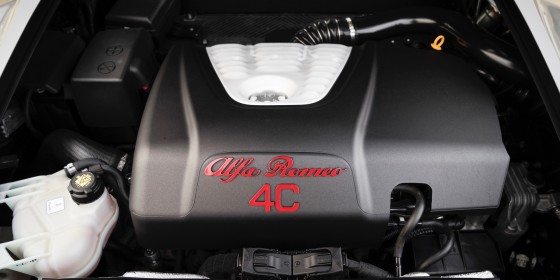 At the heart of the Alfa Romeo 4C is a 1.7-liter that’s been turbocharged to produce 237 horsepower and 258 pound-feet of torque. This runs to the rear wheels through an automated-clutch manual transmission and electronically-controlled rear differential. Enhancements can include the sport exhaust (highly recommended) and chassis updates through the Track Pack option package.

These outputs might sound small, but this is a car whose carbon fiber build and aluminum chassis mean a total curb weight under 2,500 pounds. Zero to sixty mile per hour sprints are very doable at well under five seconds. Most can achieve 4.5-ish times and more experienced drivers can expect to get near 4. That speed is just the beginning.

The 4C’s tiny wheelbase and low build, along with its even weight distribution, means that it’s an excellent corner-taker. 90-degree turns at over 77 mph without squealing the tires were possible as we drove this car and one-lane turns on the same at nearly sixty mph were easy. 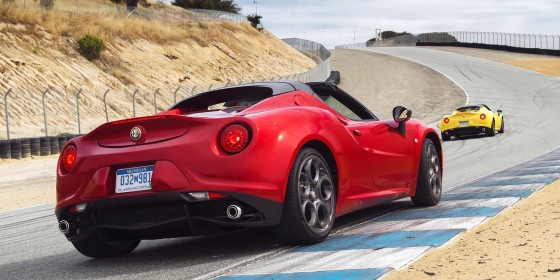 The Alfa Romeo 4C is a track car that happens to be street legal, however, so as Uncle Ben said: “with great power comes great responsibility.”

The Alfa 4C has no power steering, so at low speeds, a lot of muscle is required to maneuver the car. At around 30 miles per hour or so, though, it lightens up and at 80 mph, steering is one-finger easy. But you won’t want to do that. The steering in the 4C is precise. More precise than in almost any other car you’ve likely driven. Every movement, no matter how small, translates to the wheels.

It’s for this reason that driving the Alfa Romeo 4C is both intimidating and exhilarating. A firm grip and careful attention are required at all times. For the type of enthusiast and lover of the drive that the 4C is meant for, though, that’s perfection. We’d have it no other way. 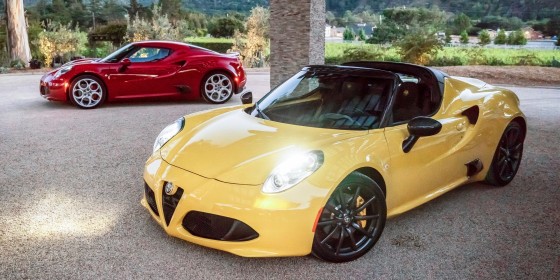 The Alfa Romeo 4C is beautiful, a bit mysterious, a little intimidating, and yet approachable. These are the rare, dreamy qualities men wish for in a woman and they are just as elusive in a car.