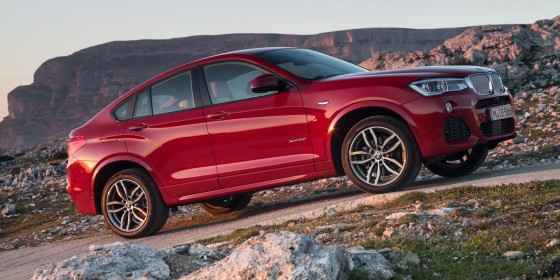 The BMW X4 is the latest introduction from the German automaker, offering a mixture of station wagon style, shooting brake performance, and crossover versatility. At first, we weren’t sure what to make of the 2015 X4, but once we got behind the wheel and started driving, it all began to make sense.

We drove the 2015 BMW X4 for a week as a daily driver, family car, weekend getaway machine, and more. Considered the “younger brother” of the X6 crossover, the X4 is based on the X3’s compact crossover platform, but sits a bit lower and is a bit wider. The X4 has definite appeal and meets a certain need, but some may take issue with its size and cramped quarters. Others will delight in its unique look, sedan-like handling, and excellent performance in a crossover-ish package.

The 2015 BMW X4 is at once a family wagon, a speedy shooting brake, and a capable all-wheel machine in inclement weather. There are no competitors to the singly unique X4 – at least none that we can think of. It fits somewhere between the small crossover market, where vehicles like the Range Rover Evoque reside, and the luxury all-wheel drive sedan segment, where BMW already has plenty to offer. 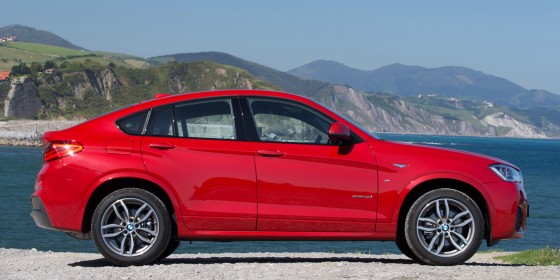 The 2015 BMW X4 has a signature BMW front fascia and forward profile, but its side profile is something new for the German company. From the side, elements of BMW’s sedans are clearly seen in the lines, especially the fastback coupe’d roofline and strong character line along the upper door panels to follow the upward-angled beltline. The fender flares, slight rear spoiler, and lower door line are all signature BMW looks.

Yet beyond that, the high stance and the big gap in the wheel wells between tire and body are indicative of the increased clearance and more robust suspension offered in the all-wheel drive X4. The lower portion of the front clip and upward swoop of the rear fascia are elements seen on other BMW crossovers, as is the wide wheel stance.

It seems like a hodgepodge look on paper, but when seen visually, it makes sense and comes together in a uniquely well-wrought package that just flows. The wagon-like hatch and lack of a deck lid give the 2015 X4 a saloon look, emphasizing the front end and long, tapering hoodline. 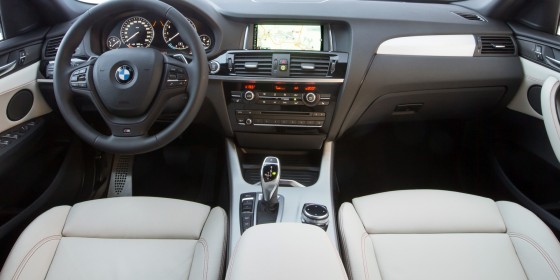 The 2015 X4 seats up to five and has the interior look and quality of materials that BMW fans would expect. It’s dominated by Teutonic simplicity in layout and form-to-function appeal, with seating offering plenty of head, shoulder and knee room throughout. The rear seats split-fold, falling flat easily when extra cargo space is needed. That may be more often than not, given the small cargo space – a compromise due to the ample seating and small overall size of the BMW X4.

The deeply slanted rear hatch means the cargo area has little volume, but it contains a lot of usable floor space. Smart tie-down points on a sliding rail and other small touches make the cargo area more useful than cubic feet stats might indicate. A standard bit of grocery and home items from a warehouse club should fit easily in there.

Most of the updates via trim additions and packages come to the interior of the 2015 BMW X4. These can get pricey pretty quickly, but bring added technology, more seat adjustments, and changes to the standard leather interior. Our higher-end model driven for a week, however, did not seem overpriced once we’d spent some time in it. 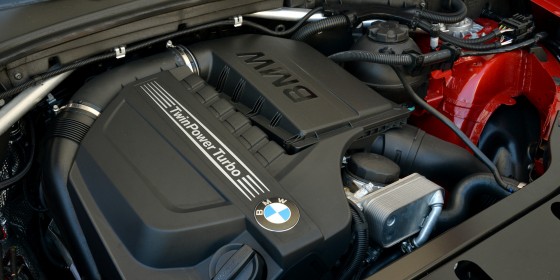 There are two engine options in the 2015 X4. The base engine is a turbocharged four-cylinder displacing 2.0 liters and producing 240 horsepower and 258 pound-feet of torque. Called the X4 xDrive28i, this model has an eight-speed automatic transmission and standard all-wheel drive. Paddle shifting, great handling, and peppy performance are standard.

The other option is the xDrive35i, which uses a six-cylinder engine that produces 300 hp and 300 lb-ft of torque to the same eight-speed automatic with all-wheel drive and paddle shifting. This version is decidedly more performance-oriented, with 0-60 times in the 5.5-second range in an amateur’s hands. 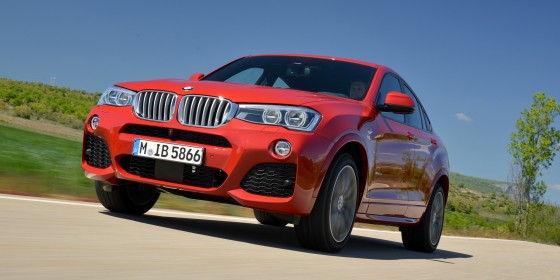 On the road, the 2015 X4 delivers a solid punch to the seats when the pedal is pressed. It corners beautifully, though is a bit top-heavy given its slightly taller stance and body versus a sedan or true wagon. This can be forgiven, though, as a worthy trade-off for the added family friendliness and all-weather capability this BMW gives.

Around town, the X4 is a maneuverable machine with a good presence on the road. A few more bumps and potholes may translate into the cabin than some might like, but this is to be expected with the sports-centric build of the chassis. Parking is a dream, though some might find over-the-shoulder visibility to the rear a little cramped with the hatchback’s fastback design. The backing camera (standard) helps.

In all, the 2015 BMW X4 is true to the Bimmer name, delivering excellent drive dynamics on all fronts. 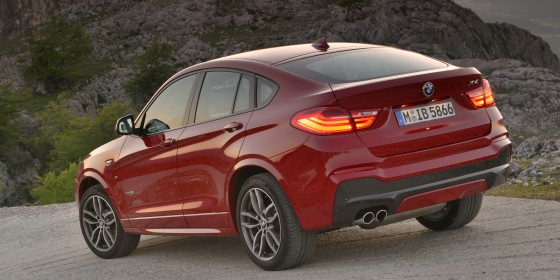 The 2015 BMW X4 drives like a sports sedan more than it does a crossover, but has the added versatility of a hatchback design and more accommodating rear seats. As a BMW Driving Machine, the X4 delivers very solid performance and strong dynamics on the road.

The comfort level within the 2015 X4 is excellent, as befits a BMW, and the ride is quiet and well-mannered when on the open road. When pressed, the engines produce beautiful sounds – strong turbos from the four and throaty growls from the six.

The BMW X4 delivers a wonderful amount of appeal on the road to go with its sure-footed AWD stance and excellent daily driver characteristics. It’s comfortable, roomy, and astute.