The All-New 2015 Chrysler 200 is a next-generation midsize sedan designed, engineered and built to compete with the very best vehicles in the industry. You may recall that we had extensive time behind the wheel of the previous generation Chrysler 200 during the Game On Blogger Road-Trip in 2011. While we enjoyed that vehicle, the new 200 is clearly a leap forward for Chrysler.

Chrysler and WAPA provided an opportunity to see the new 200 first-hand last week near Washington DC, and we were pleased to take it for a spin along the banks of the Potomac River. Our time with the vehicle was brief, but initial impressions were positive. Of particular note was the electronic rotary gear shifter and parking break, which allowed for creative use of the center console. 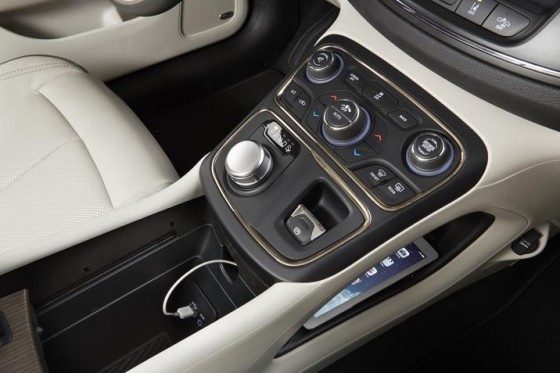 A unique pass-through storage feature that the driver and front-seat passenger can both access is enabled by the rotary-dial electronic shifting, a segment first. A clever opening at the rear of the pass-through area allows wires and cables from items stored in the pass-through area to route directly to the hidden power supply located in the covered center console. The center console features innovative sliding cup holders with smooth, furniture-like movement, allowing drivers and passengers to use the space in a way that best fits their needs.