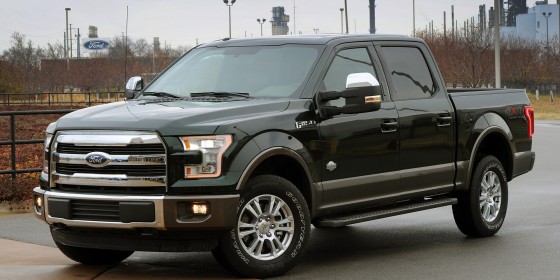 The 2015 Ford F-150 is the revolutionary reinvention of America’s favorite pickup truck, the best-selling vehicle in the United States for 32 straight years. With an EcoBoost engine and a high-strength, military-grade, aluminum alloy body, the new F-150 is designed to work smarter, not harder. Meet the “Future of Tough” in the video below :

We drive plenty of trucks here at Gunaxin, but it’s not often that we truly get to put them through their paces the way that real truck buyers really use them. So when we saw that opportunity approaching on our calendar, we reached out to Ford with a request to test the best at the American Cancer Society’s Relay For Life.

Gunaxin is proud to support our local Relay For Life event, which raised nearly $100,000 this year to fight back against cancer. The 2015 Ford F-150 Platinum was an invaluable tool for helping us host this massive community fundraiser, and we thank Ford for making that possible. Relay For Life is an overnight journey where team members take turns walking around a track, with food, games, activities and entertainment available for the community.

During the Survivors Lap, all cancer survivors at the event take the first lap around the track, celebrating their victory over cancer while cheered on by the other participants who line the track. Our event actually starts earlier in the week, with a special catered banquet for Cancer Survivors, which is the first occasion we had to drive the 2015 Ford F-150 Platinum, and experience the comforts within the luxuriously appointed cabin. 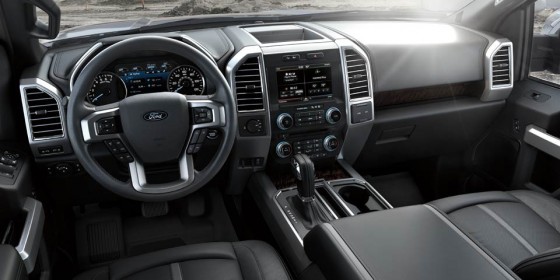 The starting price is $25,800 for the XL, but if you want to ride in style, the Platinum trim will set you back $51,350. While it’s true that most truck buyers are using their vehicles primarily for work, it’s also true that they use them to go out for dinner too. So getting dressed up for a banquet provided us a great opportunity to appreciate the power-deployable running boards, leather interior, and other creature comforts in the Platinum model. That added level of sophistication made us feel like we were driving to dinner in a large luxury SUV, instead of a pickup truck.

Moving on to the main event itself, our Relay For Life was scheduled for Saturday, and the photo above shows roughly half of our site ready to begin. In order to get to that point, you can see there is no shortage of equipment that needs to be picked up and hauled on site for several days preceding the event. We’re talking tents, tables, chairs, lumber, signage, plants and even speakers. As leaders of this large charity event, we obviously stayed very busy, and found it difficult to document everything we did with the truck. When you’re busy working, there isn’t really time to stop for a photograph. However we did capture some images of our biggest loads and wanted to share those experiences with you.

Our first work task for the F-150 Platinum was to drive 70 miles round trip to pick up over 700 pounds of sound equipment. Since that is the same weight that the F-150 shed with its new aluminum body, it was literally nothing to transport at highway speeds. We found the F-150 a joy to drive, and despite its large size it performed and handled admirably. Thanks in large part to the reduced weight, it delivers the industry’s best towing and payload capability among full-size pickups, towing up to 12,200 pounds and hauling 3,300 pounds. 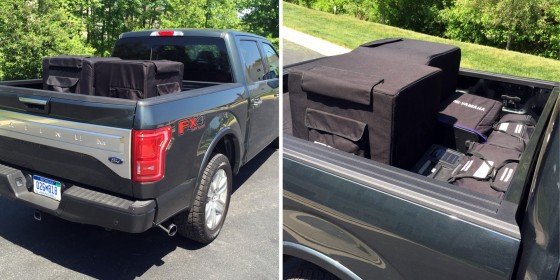 Fitting all of those speakers in the F-150 wasn’t much of a challenge either. Before departing we looked up specs and measured to make sure everything would fit and the load would remain well below the top of the bed. As you can see in the photo above, it was a bit of a Tetris game, but there was plenty of room with a few speakers riding in the massive backseat of the SuperCrew Cab. That was even before we discovered what you see in the press-kit photo below… 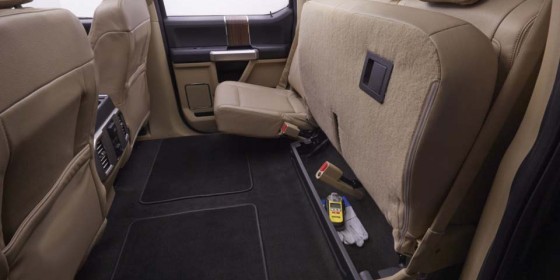 The rear sets fold up, offering even more usable space, something we didn’t realize until we had been driving the truck for a few days. This is just one example of the multitude of features and storage in the F-150 that make getting work done so much easier. If you have something you want to put in your truck, rest assured the F-150 has somewhere to put it, with plenty of storage solutions stashed away all over the cabin. It really is the ultimate toolbox on wheels.

Above you can see our speakers on stage during a performance by Musical Fun with Mr. Hyson. We used the rearview camera to pull right up to the stage in order to unload (and reload) the heavy sound equipment. If you look closely you can see the Ford F-150 Platinum toolbox parked within reach to the right, full of tools and supplies organized and locked up for safe keeping. 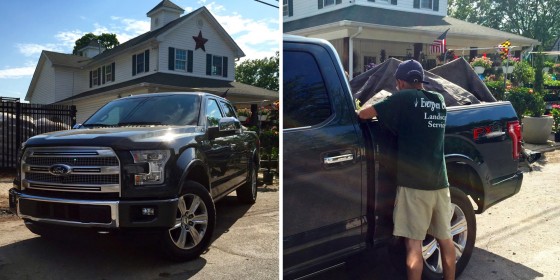 Our next job for the F-150 was to pickup plants and furniture from Evergreen Gene’s, a local nursery. Above you can see the load being protected from wind with a tarp that is secured to the cargo box tie downs. Below however is where you can really see some of our favorite features of the F-150 being utilized. 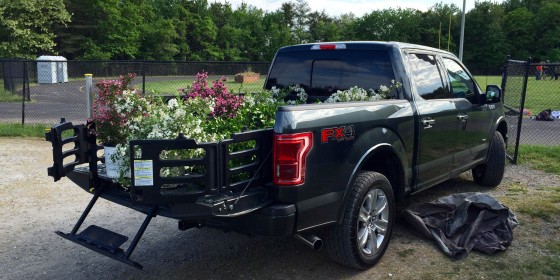 First you’ll notice the Foldable Pickup Box Bed Extender, which was absolutely necessary for this load, as we had tall holly trees laying down (sheltered from the wind), and more pots than would fit in the standard bed. When not in use the bed extender folds out-of-the-way, and doesn’t take up too much space, as demonstrated in the previous sound equipment photo.

So that was definitely a life saver, but our favorite was the Tailgate step with tailgate lift assist. That silver pole (with yellow top) sticking up on the left side is a handle to hold on to while you utilize the tailgate step, and both deploy from the tailgate. If you’ve ever owned a pickup truck and jumped in and out of the bed repeatedly while working, you certainly will appreciate this feature as much as we did. We also really dig the remote power tailgate release. 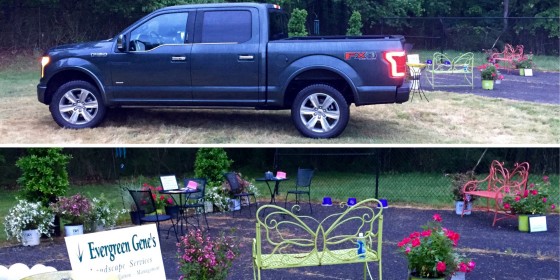 The plants and furniture that we hauled were for our Cancer Reflection Area, a quiet corner of our event where Survivors and Caregivers could reflect upon their journey and loved ones. Back at the stage though, the party went on all night, and we made great use of those massive speakers. Check out Eddie Pasa and Controlled Chaos rocking the stage in the photos below :

We left the house at 7:00 AM on Saturday morning to set up, and didn’t return home until after 7:00 AM the following morning after the event. It was a long sleepless rainy night fighting back against Cancer, and the Ford F-150 was with us every step of the way. As we sat in the truck upon arriving home, waiting for a storm to pass before unloading, we discovered yet another perfect feature of our Platinum model; massaging seats. Never have we needed a massage more than in that moment after working hard all week and all night, and the Ford F-150 was happy to provide. 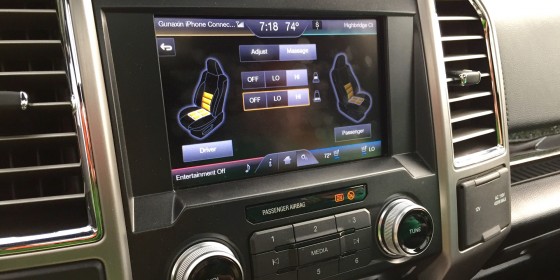 We’ve reviewed dozens of vehicles here at Gunaxin, but rarely have we tested nearly every capability in real-world situations as we did with the 2015 Ford F-150 Platinum. It hauled our loads with spirit while sipping fuel, stored everything we needed well within reach, and made loading and unloading easier with its useful features. We didn’t even mention the dozens of phone conversations via bluetooth, devices charged via USB and power inverter, and how we illuminated the field with Quad Beam LED Headlamps when the stadium lighting failed. Every challenge we put in front of this truck was handled with ease by the F-150 Platinum, and we thank the folks at Ford for loaning it to us for this important cause. We’ve seen the Future of Tough and believe it will continue its well-deserved reign as the best-selling vehicle in the United States. 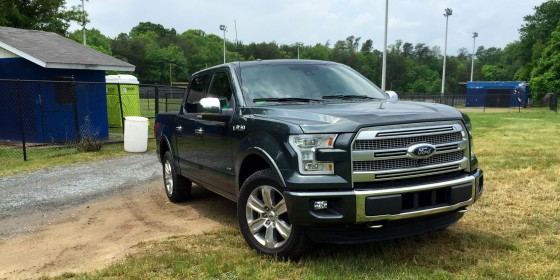