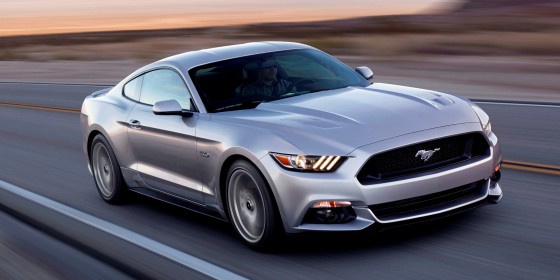 The Mustang is now fifty years old and is, in our opinion, better than ever. Ford’s engineers put a lot of work into this new-generation Mustang, both inside and out. It’s lower, wider, and more driveable. With the exception of a few points of style, the 2015 Ford Mustang in its GT rendition is as great as this pony car can be. Key changes to the underpinnings of this most definitive of American sports cars plus enough styling throwbacks to remind us of its roots, make the 2015 Mustang a new icon.

As a model line, the Mustang covers the gamut as both a coupe and convertible. Both are in a 2+2 configuration. There are six trim levels for the 2015 Mustang and at the top of those trims sits the GT Premium and the GT 50 Years Limited Edition. We drove the former and at $46,000 or so, you cannot ask for a better pony car. 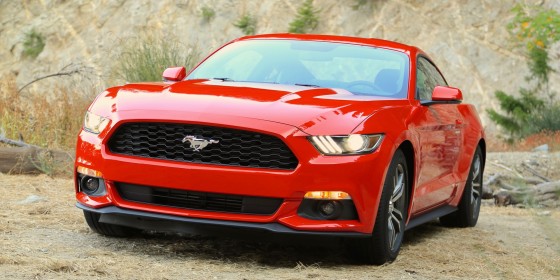 Whatever angle you view it from, you’ll know immediately that this is a Mustang. The throwback reminders to the most iconic of American sports cars are obvious enough that even the least car-conscious will notice. Yet they are not overwhelming or overdone. The 2015 Mustang melds old and new in an excellent blend of nostalgia without date stamps.

The 2015 Ford Mustang’s design begins with the front fascia and grille, which together set the tone for this new rendition of the classic. The open, near-trapezoidal shape of the grille with its pony ornament running at center sits above a wide, narrow lower intake. These are flanked by peering headlights and angled fog lamps below. The open-mouthed grille is topped by a curved upper lip that sweeps back into the hood, which itself flattens to give accent to its vent slits and fast-paced peaks growing from the fore and running to the windscreen behind.

Along the sides, the front fenders are understated, giving focus to the hard lines of the body panels, which parallel one another along the upper and lower door before disappearing into the wide haunches created by the rear fender swells. The immediate impression they give is of power running forward, which is further highlighted by the wider rear track on this new Mustang.

The roofline above is in a fastback coupe style, sloping down in a long run at the rear to end just ahead of the rear clip, letting a small deck lid end the car’s profile. The rear fascia is rounded forward and horizontally with Ford’s new single-piece three-way tail lamps squaring off on either side. Of all the styling points on this beautiful car, we like this rear end the least. The fastback, in our mind, should have clipped off “McQueen Style” (ala Bullit) rather than round off and many Mustang fans agree that the new tail lamps look cheap and don’t match the rest of the car’s design.

In all, though, this is one fine looking piece of American muscle. The GT is badged with “5.0” emblems behind the front wheel wells and a large “GT” circle centering the rear fascia. Other touches include 18-inch wheels, chromed exhaust tips, and other GT-specific additions. 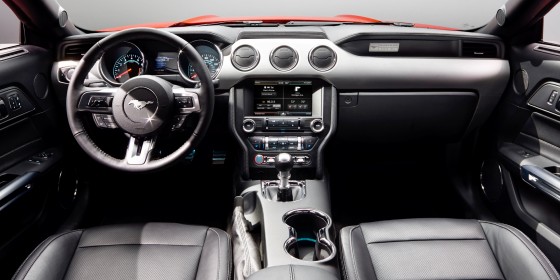 Like its exterior, the interior of the 2015 Ford Mustang pays homage to its past while moving forward with modern technologies. Simple conveniences that were never available in earlier Mustangs are now standard equipment for 2015. Items like a telescoping steering wheel, which until now has not been seen in this pony car. Yet other features like the dual-cowl dashboard design and near-useless rear seating are still the norm in this more modern Mustang.

Materials quality is much improved for the 2015 model year. There are still some hard plastics, but they don’t feel cheap like they have in the past. Significant upgrades are to be had with some of the options available in some trim levels for the 2015 Mustang. Recaro sport seating, for example, brings top-shelf Italian leather to the car and Ford’s award-winning adaptive cruise control and crash mitigation systems are now available too.

We really enjoyed the better layout of the new Mustang’s interior. The cabin is still a bit cramped, but not nearly as much as it used to be. The close quarters create a more intimate speed experience, however, keeping in tradition with this basic American sports coupe’s half-century theme.

As is the norm with Mustangs of all ages, rear visibility (the ability to see those who are losing) is not very good in the 2015 model. Small side mirrors and thick rear pillars make for difficult viewing, but a backup camera is now standard equipment across the Mustang lineup and blind spot monitoring is available in most of the trims. Another good note is the trunk space, which is huge for a car in this class. The rear seats fold down to add more when needed.

The overall interior experience in the 2015 Mustang is good with comfort levels being great for the car’s size and daily use ergonomics being much better than we’ve seen in the past. 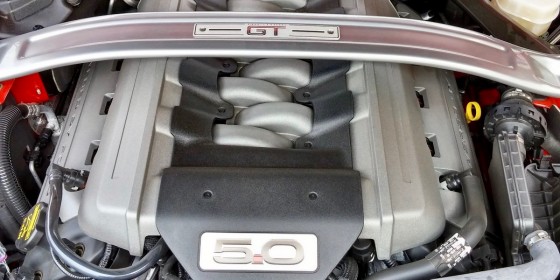 Now we get to the fun stuff. There are a lot of powertrain options for the 2015 Ford Mustang. We’re focused on the GT model, which has only one. The best one. The Mustang GT has a 5.0-liter V8 that outputs 435 honest horsepower and 400 pound-feet of torque. A six-speed manual transmission is standard and a six-speed automatic is an option (and includes paddle shifters).

That big engine and manual transmission achieves an EPA rating of 19 mpg combined, with 15 mpg in the city and 25 mpg on the highway. The automatic is about a point better in the city. We didn’t bother trying to get fuel economy estimates of our own. Anyone with a Mustang GT is going to be too busy punching the accelerator and listening to the pipes roar to give a damn about MPG numbers. 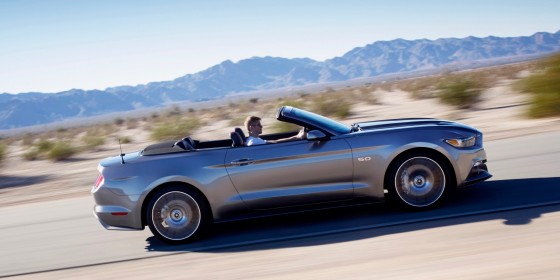 Ford rates the 2015 Mustang GT in the 4.5-second range on the 0-60 mph sprint. We didn’t beat five seconds on our test runs. Chalk it up to high altitude and the fact that we’re not professional race car drivers. We’ll take five seconds. That’s pretty damn fast in our book.

The big news with the 2015 Mustang GT, though, is in changes to the suspension. All Mustangs now feature independent rear suspension for the first time in their history. That’s not insignificant. This is also the first time we’ve driven a Mustang and had competent corner turns at speed. The 2015 Mustang GT is much more agile than any Mustang we’ve ever driven before. Add in the Torsen limited-slip differential in the manual transmission’s driveline and the launch control as standard with the same and you have a seriously awesome (and affordable) little sports coupe.

Performance-wise, this is by far the best factory Ford Mustang that’s ever been widely available. What’s more, the engine compartment is just begging for tuning and we can see enthusiasts quickly seeing spaces for turbocharging, intercooling, exhaust upgrades, and more in there. A quick look at the forums shows that the aftermarket is already buzzing for this car. That, in a nutshell, is what the Mustang has always been about and we’d have it no other way. 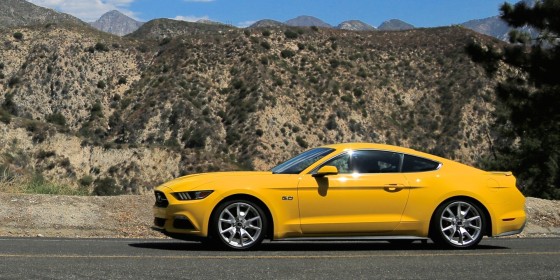 As a daily driver, the Mustang has always been the somewhat practical sports car. Its low cost and decent on-road presence for everyday cruising is what made it an icon to begin with. That still holds true for 2015. The Mustang is not ergonomic, per se, or versatile compared to, say, a crossover or minivan. But it’s useful enough for daily driving that you can drive to work, take your girl out on the weekend, and run out ot grab some groceries when you need to.

On the road, it’s a solid drive with a good presence. Plus you just feel cool driving it. On the flip side, it is a rear-drive sports car so even with “snow mode” enabled, it’s probably not the best winter car you can name. The hardcore will get by, though, if they must. 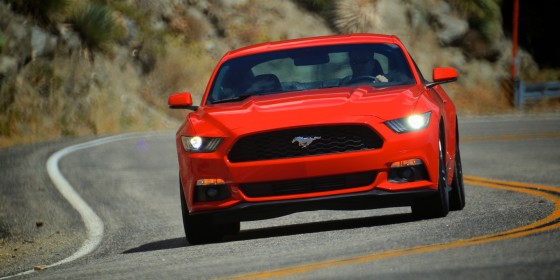 The 2015 Ford Mustang GT is the pinnacle of this pony car’s development thus far. It’s a great showing of what can be had for relatively low cost in comparison to the rest of the sports car segment. Add in some optional upgrades like adaptive cruise control, blind spot monitoring, and parking radar and this car becomes a significantly better daily driver than it’s been before. Bring on the fun factor of that big, growling V8 and the fun of pulling that lever into each gear and things really get good. Again, by far, this is the best Mustang yet.