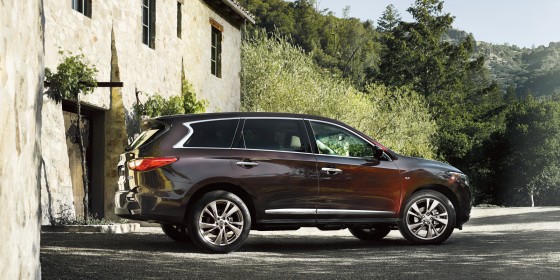 The luxury crossover sport utility segment is packed with plush, well-made, and beautiful offerings. Among those is the 2015 Infiniti QX60, which stands out for its focus on people-moving and daily use ergonomics over the higher-priced and sportier competition. This is one of the few crossovers in any segment whose third row is truly adult friendly. It’s also the perfect vehicle to take your family on a trip to Wally World, especially if your wife is Christie Brinkley :

The 2015 QX60 is a great-looking sport utility with a lot of good technology, an excellent interior, and a sleek look that follows the Infiniti penchant for making their vehicles look upscale and refined without being overdone.

The 2015 Infiniti QX60 seats up to seven, is available as either a gasoline or gasoline-electric hybrid, and comes in front or all-wheel drive. There is only one trim level, but several add-on packages bring more personalization to the crossover. Base price begins at just under $44,000 with our loaded test model ringing in at a still-affordable $56,090 delivered. 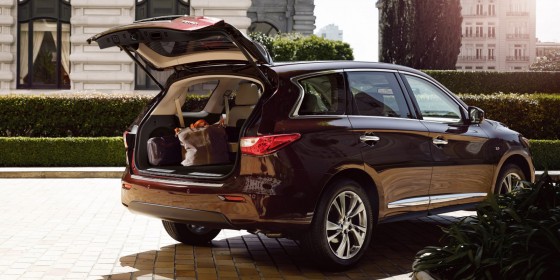 The exterior of the 2015 Infiniti QX60 has a beautiful mix of sports sedan and crossover in its overall look. The front fascia, aggressive trapezoidal grille, and long hood with heavy fender accents is very sedan-like, as is the sharply slanted windscreen coming off the curved hood. The QX60’s roof-line is tapered rearward in an almost coupe-like swoop. Under that, the greenhouse narrows towards the rear, ending in a European S-curved pillar.

Under the windows is a chromed belt-line that curves opposite the roof-line, lifting upwards slightly, paralleled by a sharp panel line underneath. This creates a sinuous curvature to the side panel shape, continued with the lower cut to accent. Wheels on the QX60 are beautifully chosen, but not so large as to impede on the heavy fender and strong body lines above.

In the rear, the 2015 Infiniti QX60 has a simple, but refined finish to it. Narrow and long-reaching tail-lamps are the focus with a simple bump overlaying the Infiniti badge. The overall shape of the QX60 gives an impression of a vehicle that’s comfortable with its own style and accustomed to movement and attention. 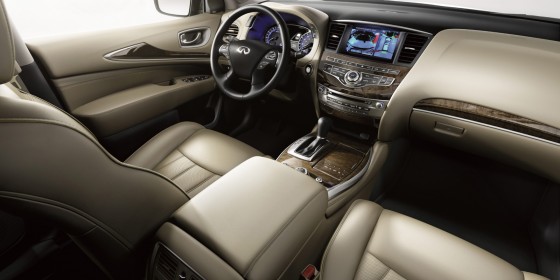 Everything about the 2015 Infiniti QX60’s interior is beautiful. High quality materials are found throughout and small ergonomic touches aimed towards family use and making passengers comfortable are to be seen everywhere. Parents will love the child seat friendly second row with its fold-forward design that allows a car seat to be left in place when moving the seat forward to gain access to the third row. Everyone will love the excellent front seating and the roomier than expected third row.

The modern design of the 2015 QX60’s interior is almost, but not quite, minimalist in its look. This gives a feeling of spaciousness in the cabin, which is augmented by seat-back designs that give more leg room to the people behind.

The driver and front passenger have highly-adjustable, very comfortable seats with the driver’s controls being well-placed and easily understood. The second row is also very comfortable with more adjustment than expected, allowing for both sliding and reclining. The sides of the second row seats have easy levers that lift to move the seat forward for easy third-row access. The third row is not as adjustable as the others, of course, but adults can sit there if need be. Children and teenagers will be more than comfortable. All three rows have great leg, shoulder, and headroom. Rear passengers will appreciate the floor vents blowing warm or cold air on their feet. 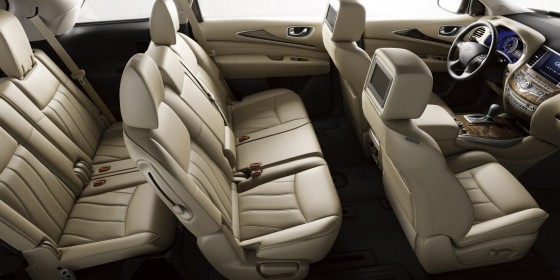 Cargo is at 15.8 cubic feet with the third row up and expands to up to 76.5 cubes with the second and third rows stowed. This is less than many rivals, but shows that the focus of the QX60 is passenger space, not cargo.

In all seating positions, passengers will be happy to be in the QX60. Options like the rear entertainment system are a great addition to any family road trip while everyone will appreciate a heated second row. 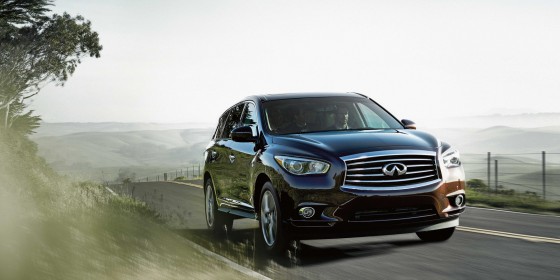 A 3.5-liter V6 is the power-plant for the non-hybrid QX60 as we drove it. Producing 265 horsepower and 248 pound-feet, this engine runs through a newly-programmed continuously variable transmission (CVT) in either front-wheel or all-wheel drive. We had the AWD variant. The EPA rates the FWD QX60 at 23 mpg combined and gives 22 mpg combined to the AWD model. Our test model averaged 24.8 mpg over almost 200 miles, most of which was highway driving. Towing in this configuration is rated at up to 5,000 pounds.

On the road, we found that the 2015 QX60 does very well for itself. It’s extremely quiet, very comfortable, and drives smaller than it is. It’s not sporty or fast, per se, but it’s no slouch either. Confidence is the word that best describes this sport utility’s presence on the road. Any trip distance will have passengers feeling good about the QX60 and standard equipment like tri-zone climate controls only add to those traits.

The all-wheel drive system, when equipped, is a sure-footed option. We found it to be capable of getting through inclement weather and driving across the dirt road to get to the lake.

There is also a 2015 Infiniti QX60 Hybrid model which utilizes a 2.5-liter four-cylinder engine, a 15 kW electric motor, and a lithium-ion battery pack. This system rates 250 horsepower in output and achieves 26 mpg combined per the EPA in both FWD and AWD. 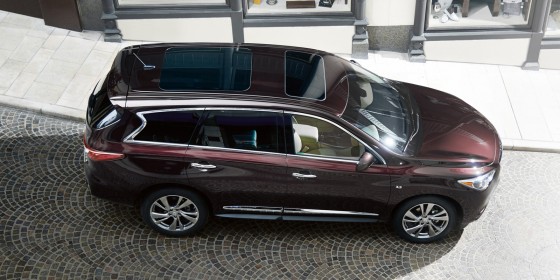 The competition in the medium-large luxury SUV segment is high. Both the Acura MDX and BMW X5 are sportier, more road-focused, expensive options. But they lack the interior space and passenger accoutrements of the Infiniti. The Buick Enclave is more comparable to the QX60 on most fronts and is similarly priced as well. For those who prefer a sportier drive but aren’t willing to pay for the BMW nameplate, the Infiniti QX70 is an excellent choice, though it doesn’t have the third row or the passenger space of the QX60. 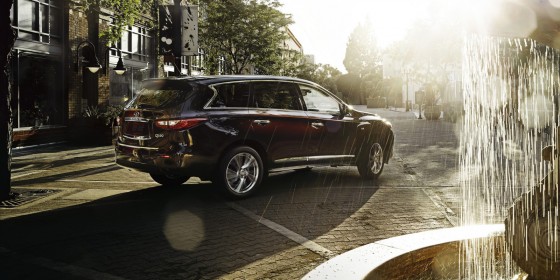 We very much enjoyed the refined, well-balanced build of the 2015 Infiniti QX60. This is a passenger-focused luxury crossover and families or those who often carpool to the office will especially love the QX60’s offering. Priced about right, at around $50,000 well-equipped, the 2015 QX60 is an excellent option in the luxury SUV market.