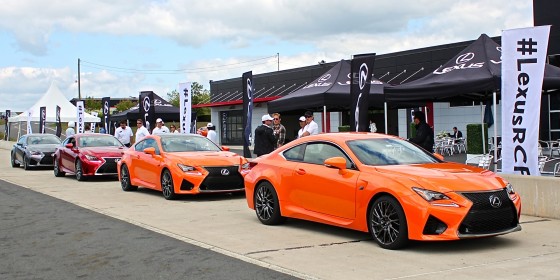 The Lexus IS F that we drove last year in Vegas is gone, and it’s seemingly been replaced by the far sexier 2015 Lexus RC F. We always knew those Lexus letters must stand for something, and with the new RC we actually got the answer : Radical Coupe (and the F is for Fuji Speedway). We’re going to assume they mean the dictionary definition of Radical and not skater or TMNT slang. So is this new model a radical departure for Lexus? We were invited out to Monticello Motor Club recently to find out.

With our affinity for anything orange, there is absolutely no doubt which vehicle we chose to drive. We hopped into a Molten Pearl RC F at the hotel and took a spirited two-hour drive to Monticello where we spent the rest of the day laying down laps on an 18 turn, 3.6 mile course with 450 feet of elevation change. Does anything in that last sentence sound even remotely close to the old Lexus that your Aunt drives to church? Radical! 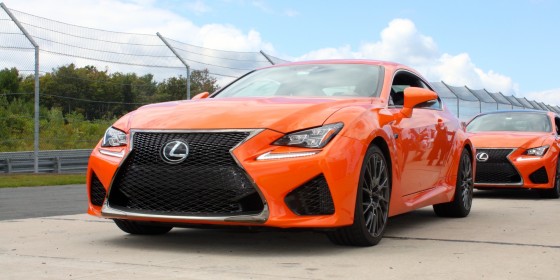 The RC F is the most aggressive implementation of the new Lexus spindle grille yet, and as we’ve said before, the further they push it, the more we like it. Even those who dislike the look can at least admit it’s wild and different, and with that we believe Lexus has accomplished their goal. We think the RC F (especially in Molten Pearl) is second only to the LFA when it comes to selecting the most beautiful Lexus ever.

The exterior styling is even more striking when you opt for the weight reducing carbon fiber roof and rear wing (which deploys automatically). You’ll also notice the numerous air intakes and cooling ducts which aren’t for show on this performance vehicle. There is a beastly 5.0L V8 producing 467 hp under the hood that needs to stay cool to make it purr. We absolutely love the sound it makes from the stacked exhaust tailpipes.

The interior of the RC F is a bit of a mixed bag. You get all of the quality that you expect from Lexus but with a hefty dose of excitement. The sport seats combined with black carbon fiber and aluminum give the RC F a distinct sporty feel. Even the back seat looks amazing, and we doubt most owners will ever use it. We’re particularly fond of the Circuit Red interior, but obviously that doesn’t coordinate too well with our orange exterior. Sadly there is no option to add even orange accents to the interior. We strongly feel that anyone who is going to purchase an orange V8 coupe is going to be adventurous enough to want some of that color on the inside of their vehicle too.

The instrument panel is dynamic and stunning, providing all the information you need clearly, and bringing a level of innovation and fun to gauges that matches the spirit of the RC F. Unfortunately we continue to find the infotainment system and it’s interface to be the weakest component in any modern Lexus and not up to the standards of the rest of the vehicle. 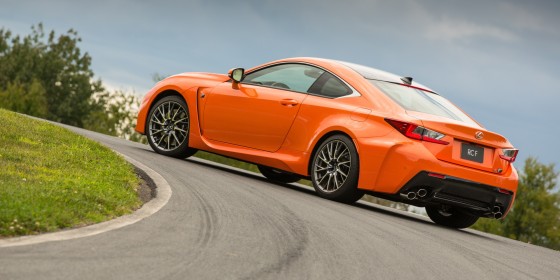 So it looks sexy as hell, but how does it drive? Luckily we spent an awesome day going very fast (sometimes too fast) around an amazing course so we have some thoughts. The RC F is truly fun to drive, and relatively easy to handle. We’ve now experienced the entire F / F-Sport performance line at the track and this is the most fun we’ve ever had in a Lexus. It has the power you need and the ability to control that power with a bunch of advanced technology. These are just some of the features you’ll find on the RC F (see press release for more details) that combine to make track day more enjoyable even for an average driver : 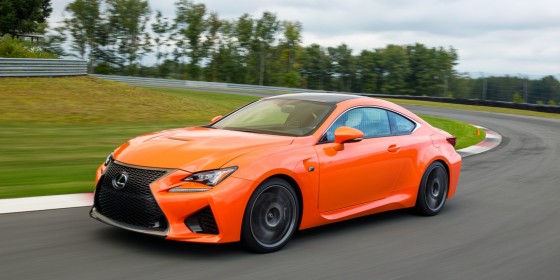 While the RC F is loaded with advanced technology, we can definitively state that you still need to drive it somewhat properly. We definitely don’t recommend watching for a record number on your speedometer as you’re coming to the end of a straightaway when you should be braking for a tricky corner. We’d also suggest that you not drive with your windows open when you overshoot that corner and go into a generous run-off of rain starved turf. Luckily no video of such an incident exists, so consider this paragraph a cautionary hypothetical story. 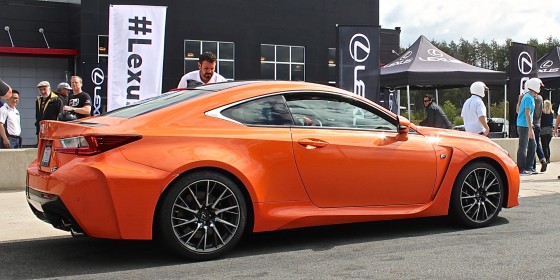 So driver skill-level aside, did we mention how much we love that color? You may have noticed that we haven’t really shown you any other choices, because for us there is only one. We suppose if orange isn’t your thing, then the Ultrasonic Blue Mica 2.0 in the stunning picture below might be a suitable selection as well. 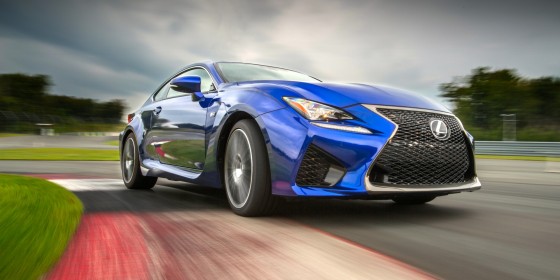 How about we look at some pictures that move? Clearly this clip does not feature us behind the wheel, as the car is the wrong color, and it stays on the paved surfaces. However it is a rather impressive collection of driving footage to give you a little idea of how we felt behind the wheel of the V8 Lexus RC F… like a bad ass race car driver!

We’ve driven the entire Lexus lineup (with the exception of the LFA) and the 2015 Lexus RC F is clearly our favorite. Starting at $63,225, it’s competitively priced in its class, but clearly not a purchasing decision that most would make lightly. Crave some of that Radical Coupe goodness with less track day prowess and a more manageable price tag? Lexus offers a 306-hp V-6 in the RC 350 starting at $43,715 and you can bump that up to an F-Sport for about five grand more. We drove both and were left impressed with them as well. Though given the choice of what to drive and write about, you can’t blame us for focusing on the RC F. The F-Sport is pictured at right in the photo below, and good news, it’s even offered in Molten Pearl Orange! 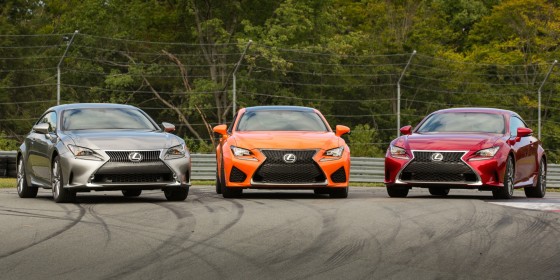