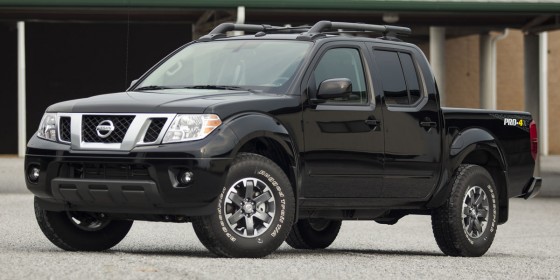 The Nissan Frontier has long been a favorite small pickup truck, selling well in both its low-end, entry-level trims and its highest-end Pro-4X extreme offroad trim. For us, the Pro-4X is where it’s at, of course, with all the goodies and fun times it brings. The 2015 Nissan Frontier Pro-4X marks over a decade for this generation of the pickup and some of that age is beginning to show as rivals from General Motors and Toyota are seeing updates.

As it is now, though, the 2015 Frontier is still a solid little truck with a lot going for it. Although some critics have pointed to the GMC Canyon and Chevrolet Colorado as a better alternative for rear seat accommodation and on-road comfort, we note that the GM twins are much larger than the Frontier – so large that they verge on being full-sized trucks – with far less capability off the road and in the cargo bed. Instead, we still feel that the chief rival here is the Toyota Tacoma, which in 2015 also began showing its age (and has been replaced by the 2016 model), but does offer a better back seat experience and can be better off the road when the (pricey) TRD Pro package is offered.

For our money, though, there’s a lot to argue in favor of the 2015 Nissan Frontier Pro-4X. Fleet buyers have also been regularly turning to the Frontier in its base package as a great option for a small pickup truck. Many of us fondly remember the days of the Nissan Hardbody, the Frontier’s predecessor, and its legendary ability to take a beating and keep on running. 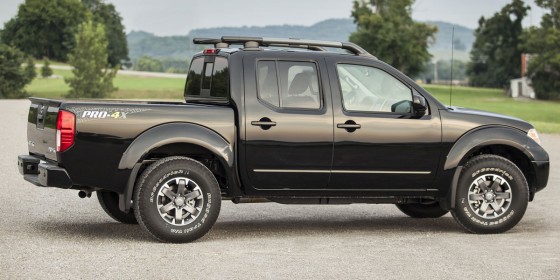 The 2015 Nissan Frontier is offered in both extended (King Cab) and crew cab body styles. The crew can be had with a five-foot or 6.1-foot cargo bed. The longer bed size is standard on the King Cab. Five trim levels are available for the 2015 Frontier, starting with the base S, then the SV, Desert Runner, Pro-4X, and the SL. The S, SV, and Pro-4X are the most common purchases.

The basic Frontier look is stocky and rough and tumble. There isn’t much ambiguity about what the Nissan Frontier is: a ready-to-work pickup truck with hauling stuff and going places being its primary functions. This look has served the Frontier well and has held popularity for over a decade.

The strong fender flares, coupe-like roofline and aggressive grille are strong indicators of the Frontier’s appeal. Add on the roof rack (optional on most trims, standard on others) and throw in some bed utility options such as moving tie-downs and the sliding bed extender and you have a great pickup.

In the Pro-4X package, things are even more rough and tumble with the slightly taller stance of the Frontier (thanks to suspension upgrades) and bigger tires. 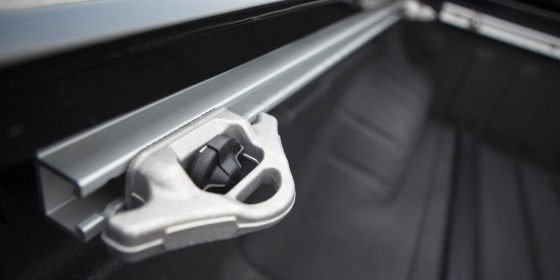 The cargo bed is one of the best in the midsize truck business. It’s square, easy to access, and functional on several levels. Add in the spray-on bed liner – a must in a working pickup truck – and optional tie-down rails and sliding bed extender and you’ve got a very versatile cargo bed. The bed extender slides back to sit over the tailgate, extending the bed out while holding cargo in. It can also be flipped and pushed all the way forward to be just ahead of the wheel wells, nearly touching the cab-side of the bed, leaving perfect pockets for groceries and smaller items up front. It can be easily removed by sliding it out of the rails if it’s not needed.

The sturdy, heavy-railed roof rack looks good on the Frontier, but also adds a lot of space for more gear as you head off on adventures or move your buddies across town.

The interior of the 2015 Frontier is where the truck begins to show its age. The design is functional and solid, but not very refined. Most of the design elements are blocky and look like they’ll stand the test of time, but there’s little flow or modern flair here. Hard plastics and big knobs are the cues. In many ways, we like this, but comfort and convenience aren’t the focus of the Frontier’s interior at all and that can wear down those who might expect a more user-oriented interior experience.

The 2015 Nissan Frontier’s interior isn’t without its high points, though. The seating is square and hard, reminding us of pickup trucks from the 1990s, but in this small truck, they work very well and are supportive and generally comfortable. Taller drivers and front passengers will need to fine-tune adjustments to stay comfy, but the higher trims accommodate. Storage is good as well, though not stellar, with plugs and phone cubbies being more of an afterthought than anything else. We like the steering-mounted controls for stereo and cruise, though, for their simplicity and ease of engagement.

Speaking of technology, one of the big upgrades this year for the Frontier is the NissanConnect interface. It’s now available in all Frontier models, with or without navigation, making it much more accessible. This is a great system that’s relatively easy to master. It brings phone connectivity, satellite radio options, smartphone app integration, hands-free texting and more.

The back seats in the Crew Cab are a little less exciting, but still useful in the 2015 Frontier. The big and tall will want to avoid sitting back there, if possible, but kids, small adults, and child safety seats are perfect fits. So is the dog, if you happen to have a four-legged companion on your adventures. The jump seats in the King Cab are really only for emergency use and even then, alternatives might be better. In all cases, the seats fold up to allow more cargo space on the floor. 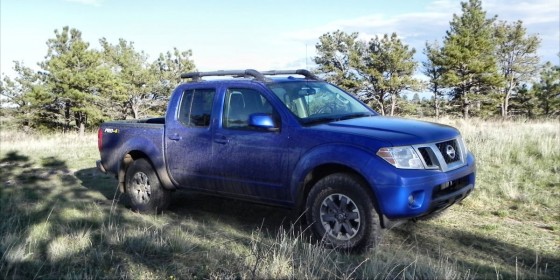 The lower trims start with a four-cylinder engine displacing 2.5 liters and outputting 152 horsepower and 171 pound-feet of torque. A five-speed manual transmission is standard, as is rear-wheel drive. A five-speed automatic transmission is an optional upgrade. Fuel economy with these packages ranges from 21 mpg combined (19 in the city, 23 on the highway) for the manual trans and 19 mpg combined (17/23) for the automatic.

The rest of the Frontier models feature the much more capable 4.0-liter V6 engine that pumps out 261 hp and 281 lb-ft of torque. This runs through a six-speed manual transmission or five-speed automatic, with some packages being auto-only. Both rear-wheel and four-wheel drive are available, depending on packaging or option upgrade. A two-speed transfer case is standard on the 4WD models and the Pro-4X package adds a locking rear differential. The automatic transmission also includes hill-start assist and hill descent control. 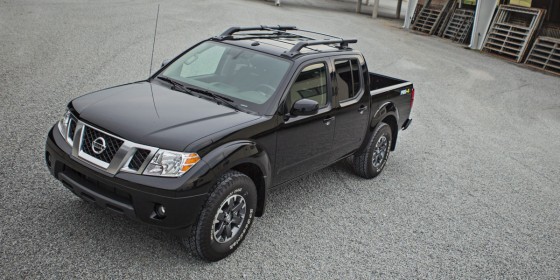 In everyday use, the 2015 Nissan Frontier is a working truck, no doubt about it. If your goal is to commute to a desk during the week and then take off on the weekends, you might find the Frontier less comfortable and with poorer fuel economy than some other options on the market. If you prefer to haul a lot of tools or gear around while still being able to park in reasonable spaces and get around town without fighting for a wide enough lane, then the Frontier is perfect. 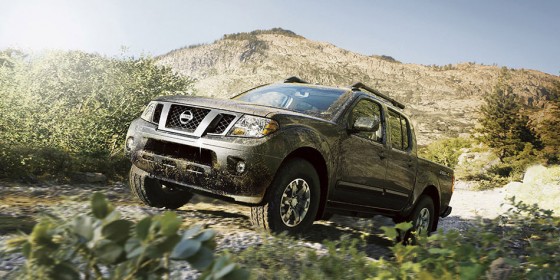 In the Pro-4X package, the 2015 Frontier gets even better. This very capable, very robust off the beaten path option brings all the adventure you can handle. While it may not stump jump or rock crawl like some more specialized rigs you might see, the Frontier Pro-4X can easily do 100 miles without roads through dirt, sand, and mud without much of a flinch. We did exactly that along with a dirt road tour of Eastern Wyoming and Western Nebraska and had a great time doing it. 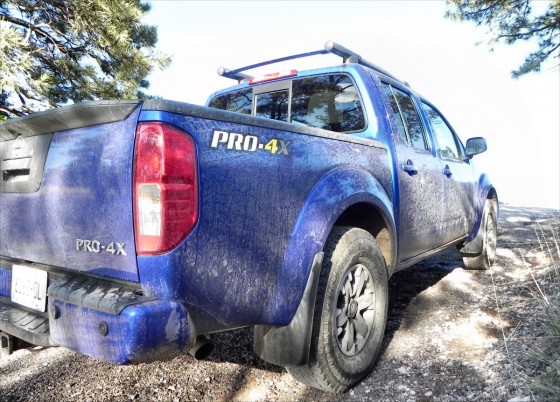 There are few things the 2015 Nissan Frontier Pro-4X cannot do. It drives along washboard roads and ignores the bumps, slogs through mud to the best fishing holes without complaint, and even seems to relish the act of finding its own path through dirt and shrubs to get to that perfect camping spot on the hill. 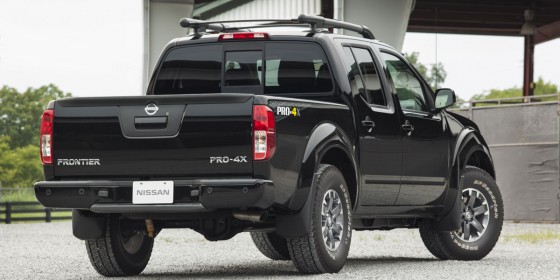 When all is said and done, the 2015 Nissan Frontier is a solid little truck that’s capable of working every day and then heading to the hills for play time on the weekends. Despite its age, it’s still a compelling choice in the midsize pickup truck market.