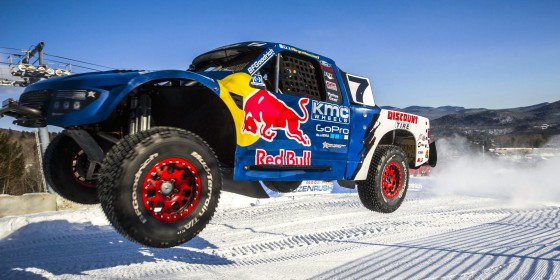 In the over six-year history of Gunaxin, we’ve been to a variety of major sporting events. We’ve had an amazing time at the Super Bowl, Winter Classic, Brickyard 400, MLB Playoffs, USA Pro Cycling Challenge, Stanley Cup Playoffs, Baltimore Grand Prix, and many more. However, none of them could rival the ridiculous spectacle of watching two 900hp trucks race head to head in the snow live at Red Bull Frozen Rush. We spent last week in Newry, Maine at the 2015 running of Red Bull Frozen Rush, and we still can’t get over how awesome the action was. 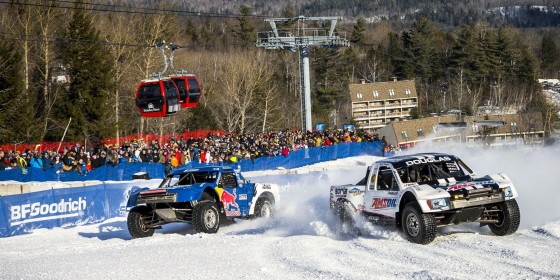 Nine of the best off-road drivers in the world gathered on the ski slopes of Sunday River Resort to battle in a single elimination tournament to crown the 2015 Frozen Rush Champion. In the second year of the event, organizers were able to overcome some of the challenges of racing trucks side by side in the snow, making the course wider and adding “snow flaps” to cut down on some of the “rooster tail.” They also split the drivers up for the middle of each lap, but had them come back together for the epic finish. The result was some thrilling side-by-side finishes and battles over the final jump and into the last corner. Check out a quick highlight video of the action below :

The race featured legends of off-road racing like Ricky Johnson and Rob MacCachren competing against current stars like Brian Deegan and Bryce Menzies in a discipline that none of them really have much experience with, since it was recently invented. Ricky Johnson helped prove the concept viable two years ago, and then won the inaugural event last year. However he passed his old truck off to fellow Red Bull driver Bryce Menzies this season, and was defending his title in a different rig. 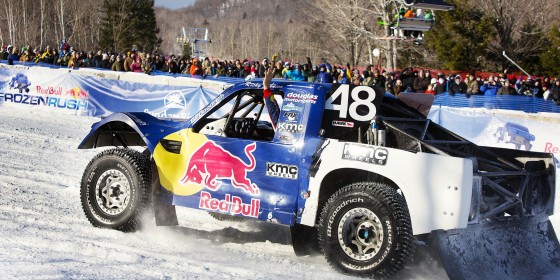 The action was fast and fierce, with the competitors getting squirrelly in some of the turns, and even ending up on the wrong side of the track at times. Visibility is certainly an issue in the snow, and handling was still a challenge despite those amazing studded BFGoodrich tires. The head to head format was a glowing success, with many tight moments on the course that were thrilling to watch live, but even more compelling on video. Check out the Top 5 Moments from Red Bull Frozen Rush in the clip below :

The videos may have spoiled the ending a bit for you, but in the end it was indeed Ricky Johnson taking on Bryce Menzies for the 2015 title. Sadly RJ overshot a turn on the first of six laps, a mistake which he was not able to overcome as youngster Bryce Menzies ran a relatively mistake free race to take the checkered flag. The title sponsor Red Bull took the top two spots on the podium and their partner BFGoodrich also has a strong showing at the event. 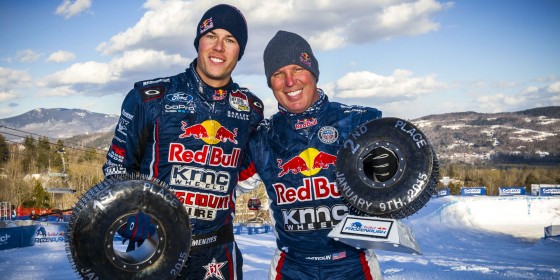 If you missed Red Bull Frozen Rush streaming live last week, you have another opportunity to catch the entire event airing March 1st on NBC as part of the year-long Red Bull Signature Series coverage. Since no trip to the ski slopes would be complete without a GoPro camera, we’ll leave you with some amazing footage captured on-board the trucks. Finding the finish line after taking a face full of snow on the final turn is one of the most impressive things you’ll ever see.

For even more from Frozen Rush, check out the incredible photos from the Red Bull Content Pool in the gallery below :