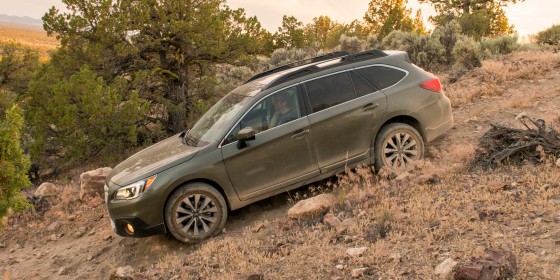 The Outback is the grownup’s Subaru, featuring a family-ready interior and a much more upscale feel than others in the lineup. The 2015 Subaru Outback takes this to new levels with more interior space, a better road presence, and a sleeker look. Yet it retains that signature Subaru style and “get there” readiness that we love.

The 2015 Outback sits atop a segment of crossovers that is somewhere between the small compacts and the larger, midsize options. It’s one of the few wagons in the segment too, the only other being Toyota’s Venza, which will be discontinued after the 2015 model year. Subaru can afford to be unique, though, because their fanbase is itself pretty unique. Those who buy a Suby are not likely to consider a big, boxy crossover or a small compact “well, at least it has all-wheel drive” option. The Subaru owner wants their bran cake and to eat it too.

Hence the only Subaru model without standard all-wheel drive and a high clearance for its class is the BRZ, designed in conjunction with Toyota, and meant entirely as an on-road sports car. Even the WRX and STi sports cars are actually rally machines that just happen to be pretty good on the pavement too. So as the flagship family car for the brand, the 2015 Subaru Outback is right in line with the rest of what the company offers. It’s right-sized, capable, and much more comfortable than might be expected. 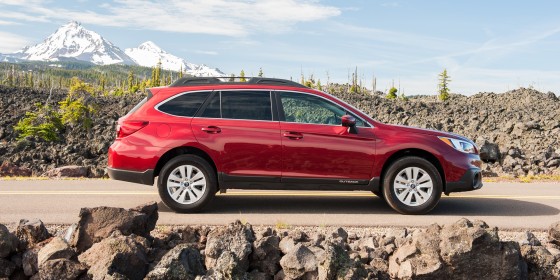 The 2015 Outback is a completely new design, but you wouldn’t know that looking at it from the outside. On the car lot, a 2014 and 2015 model will look much the same to the casual observer. Subaru had little reason to update the styling cues for the Outback. It was already popular, so why mess with a good thing?

There are some subtle changes, though. The 2015 Outback is a bit bigger, a touch taller (with well over 8 inches of ground clearance), and has added accents to its bodywork. New design language at Subaru has rolled out across its lineup and the 2015 Outback shows that with its more sophisticated front fascia, more accentuated body lines, and its smoother overall look. The new Legacy flagshipped these changes and the Outback carries them on.

Of note are the great wheel options to be had with this new Outback, the signature integrated roof rails, and the fact that somehow the Outback now looks like it’s equally at home on a dirt road up the mountain or curbside at a five-star restaurant. It’s a great mix. 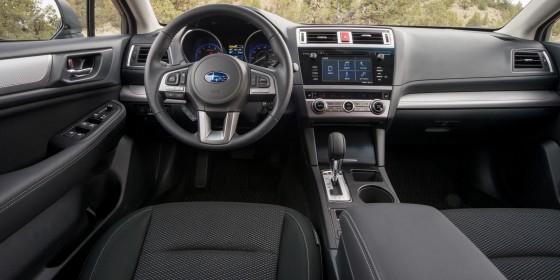 The interior of the 2015 Outback is where obvious upgrades have been made. They are much-needed and very well-done. The most prominent change is the addition of more than an inch of legroom in the back seats. This was accomplished by lifting the dash upwards and shrinking it a bit so that the front seating could move forward without impingement. This makes the back seats of the new 2015 Outback usable by adults without any discomfort – even for the big and tall. Three full-sized grownups can sit in the back seat without being cramped.

Another huge improvement in the 2015 Subaru Outback is the pointed upgrade in materials quality across the board. Everything in this new Outback is of quality and hard plastics are almost completely gone. Soft-touch and leatherette are the norm now and it’s a welcome change. Nobody can use the word “cheap” when describing the excellent interior space Subaru has created here.

One area that could use some improvement, though, is the infotainment in the 2015 Outback. It’s good, but not great and can be clunky to operate at times. It does everything you will probably want, but it may take some time to learn how to get it done.

On the other hand, systems like the Subaru-exclusive EyeSight setup for adaptive cruise control and collision mitigation are some of the best in the business. Few vehicles boasting adaptive cruise can claim to be as smooth or smart about it as Subaru can. This is one of the only systems on the market that uses three-dimensional camera imaging to sense the vehicle’s lane, objects in front of it, and that doesn’t jerk the brakes or feel unsure of itself when it slows down to pace a vehicle in front or begin stopping to mitigate a crash. 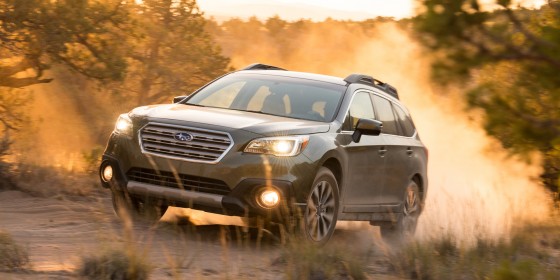 On paper, the 2015 Subaru Outback is underpowered, but in practice, it’s exactly right. The base engine is a 2.5-liter opposed-piston four-cylinder coupled to a continuously variable transmission (CVT). This setup is adequate for most daily use, but it will feel weak in acceleration and passing and may not have the umph required to do some off-pavement exercises. Its 28 mpg combined EPA rating (25 city, 33 highway) is a great tradeoff, though, that will please those who only occasionally take their Outback for its name.

For those desiring a little more get-up, though, the 2015 Outback has a 3.6-liter opposed-piston six-cylinder engine that also utilizes a CVT. We drove this model and relished its smooth operation and confident appeal. The EPA gives this engine 22 mpg combined (20 city, 27 highway). We nearly proved out those numbers with our tester averaging just under 21 mpg overall.

With 8.7 inches of ground clearance, many might expect the 2015 Subaru Outback to be a bit harsh on the street. This is not the case at all, though, with the suspension tuning in this Suby being just right for balancing on-road presence and off-road capability. No, the 2015 Outback doesn’t corner like an Indy car nor does it climb rocks like a Jeep, but it finds a spot in between those capabilities and does very well for itself. The Outback is capable of doing things off the pavement that some SUVs might balk at while at the same time being far more comfortable around town or on the highway than any knobby-tired offroader would. 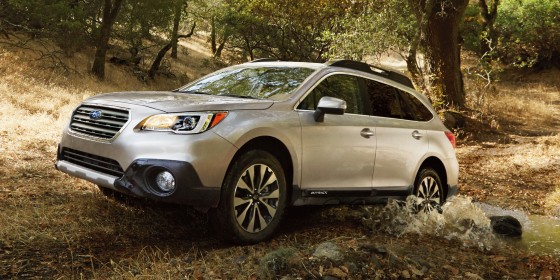 Any vehicle being considered as a potential family car will have safety as a top priority. Subaru is well-known for their push for safe vehicles with excellent crash scores. The 2015 Outback has top marks on every front. It’s a Top Safety Pick+ from the Insurance Institute for Highway Safety (IIHS) and a 5-star overall winner from the National Highway Traffic Safety Administration (NHTSA). Every safety feature you can name is either standard or available for the Outback now, including advanced features like automatic braking and frontal collision mitigation. 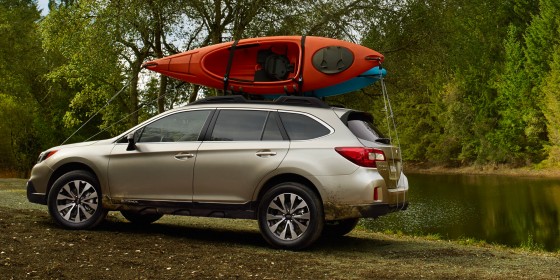 Everything about the 2015 Subaru Outback speaks to the active lifestyle while holding practical to the daily grind. The Outback works well as both a commuter car and weekend getaway machine. Snow, ice, sleet, mud.. whatever you have to drive through, the 2015 Outback will do it. Even if it’s just so that you can get to the office for some damn meeting. Which may be the Outback’s only serious downside. With this crossover, you don’t have an excuse not to show up. On the other hand, that also means you have no excuse not to load up the dog and head for the lake too.