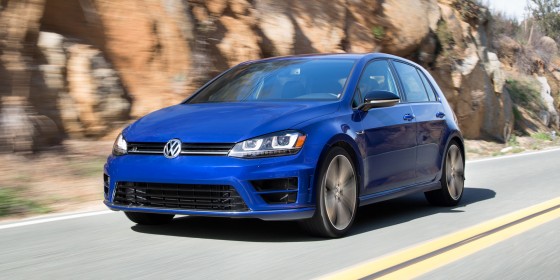 If you’re a performance nut or even a quasi car guy, the following will make you drool. (Get a napkin.)

All of those things describe the 2015 Volkswagen Golf R. It’s tiny, it’s muscular, and it’s a blast to drive. The Golf R sits at the top of the VW lineup of hot hatches, just above the GTI model. Dollar for dollar, even when compared to muscular performance sedans or hatches with Detroit nameplates, the Golf R is the best performance machine you can get. In the sub-$40k price point, there are few that compete.

In fact, the nearest comparison we could find for the 2015 Golf R is from Subaru, though arguments could be made for some of the other, lower-priced and slightly lower-performing options available. Pound for pound, though, the 2015 VW Golf R is the ultimate wolf in sheep’s clothing sitting at the stop light masquerading as a compact family car. And it sounds like this:

The 2015 Golf is a hatchback of somewhat simplistic design, but with an appeal about it that is difficult to describe. The overall look is something that only a German make could pull off, being rather plain but still a draw to the eye.

The front fascia is simple, with a large scoop under the bumper and a small grille above it, centered by the VW badge. Peering, almost angry headlights stand at the edge of the fenders and the hood is curved and smooth, running a bit longer than might be expected for a compact hatchback.

From the side, the 2015 VW Golf has a very raked windscreen, a slightly curved roofline, and wheels pushed far out to the corners. Rearward-leaning lines in the back door cuts, rear pillar, and the shape to the hatch create a sense of forward motion for the Golf.

In all, it’s a simple look. The Golf R model is differentiated only by its quad exhaust tips and R badges behind the fenders and on the rear. At a stoplight or in the parking lot, most would never know that the 2015 Volkswagen Golf R is anything but another compact hatchback from VW. 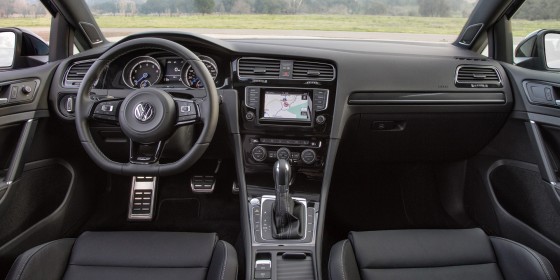 Inside the 2015 Golf R, things get a bit more aggressive about the performance this little car has. That upscale appeal comes not from flashy design elements. Instead, it comes from the largely conservative Golf interior – with its quality materials – having a few sport additions that stand out all the more because of that otherwise unadorned look.

Seat bolstering in the driver and front passenger seats is heavy, but not overbearing. The chairs are still very comfortable, despite the car’s small size, with a lot of head, leg and shoulder room thanks to the new Golf design that improves interior space. The heavily-bolstered seats provide a lot of support during performance driving and are emblazoned with an R embossment. That same symbol of the little Golf’s hidden capability also sits on the bottom spoke of the steering wheel, which is flat-bottomed in the European sport style.

Rear seating in the 2015 Golf is good, but not overly roomy. As with most compacts, the rear seats can accommodate adults with some concession from the front. Children and those in child safety seats will do well there, however, with no space concerns. The rear seats are perfect for occasional use to take everyone out for the weekend.

The cargo space in the 2015 VW Golf is excellent. The rear hatch hides almost 23 cubic feet of space and the rear seats fold to provide a full 52.7 cubic feet in all. That’s class-leading and on par with many larger vehicles. 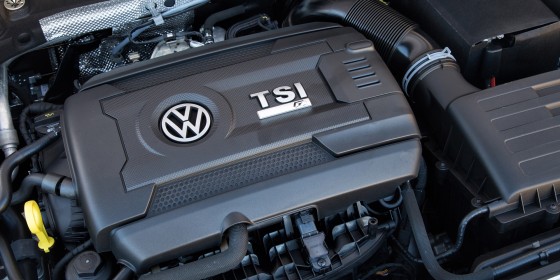 Now for the fun bits. Most of the heavy price tag paid for the 2015 Volkswagen Golf R over and above its other model brethren goes towards performance. It all starts with a turbocharged 2.0-liter four-cylinder engine that produces 292 horsepower and 280 pound-feet of torque. This runs through a six-speed dual-clutch automatic (which VW calls a DSG or “automated manual”). An actual manual transmission is not available for the 2015 model year; a bummer for purists, but those who take the time to experience the Golf R with its beautiful DSG will quickly come to appreciate its attributes.

Even better, though, that automated manual with its 280 lb-ft of output sends it to all four wheels in an all-wheel drive configuration. Volkswagen says that the little 2015 Golf R can launch from zero to sixty miles per hour in 4.9 seconds. We believe that’s possible in professional hands, as our average 0-60 times in the R were in the 5.3-second range. 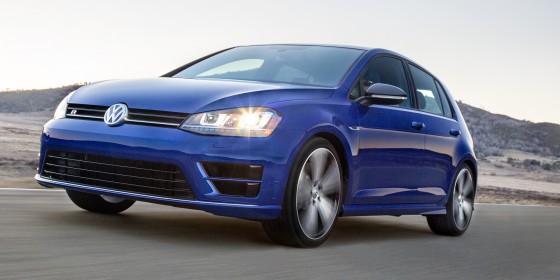 As for fuel economy in the 2015 VW Golf R, the EPA gives it a 26 mpg combined rating, with 23 mpg in the city and 30 mpg on the highway. We didn’t see anything near that in our week with the Golf R, but that was largely because it’s almost impossible to drive this car nicely enough to get good mileage. The Volkswagen Golf R wants to hoon around town, accelerate up the on-ramp with the pedal on the floor, and hit corners at speeds that might pucker the sphincter of lesser drivers. None of that is good for fuel economy, but all of it is good for the soul. So we did it often.

Competitors to the 2015 Golf R 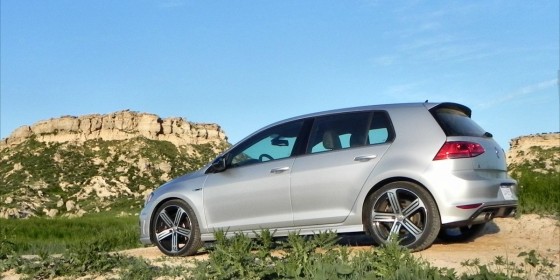 With performance cars, comparison to competitors is inevitable. For the 2015 Volkswagen Golf R, competition is slim. There are, in fact, no five-door compact performance vehicles on the market right now. Except the Golf R. In previous years, the Mazda Speed3 and Subaru WRX STi were competing hatches with similar price tags and performance attributes. Now, the Speed3 is gone and the STi has become a sedan.

So the closest competitors to the 2015 VW Golf R are all lesser vehicles, though they do have lower price points to match. The Ford Fiesta ST and Focus ST, for example, are both on par with the Golf GTI in many respects, but not as powerful as the Golf R.

This means that, for now, the Golf R stands alone as its own class of performance hatch. That will change next year when the Focus RS comes. 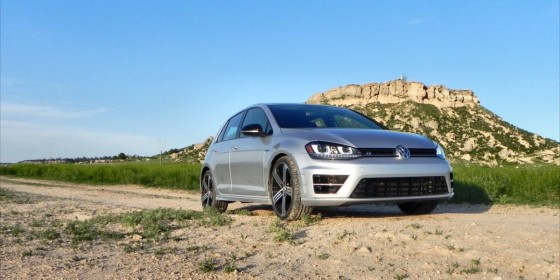 The 2015 Volkswagen Golf R has a lot going for it and one big drawback. It’s a performance hatchback that delivers more than expected in power and handling. It’s a practical car that offers all of the versatility that a five-door compact hatch promises. It could even be classified as a sleeper car for those looking for a stop light surprise. One thing the Golf R cannot be accused of is being cheap. In any sense of the word.

The 2015 Golf R has a solid look, great interior, and a lot of quality going on. At over $37,000 (as we drove it), the R also rings in at a price point well above the next Golf in the line and begins to get close to the price that might be paid for a flashier, more muscular-looking performance vehicle.

Yet the Golf R finds an audience and we can’t blame them for loving this little speed demon. It corners beautifully, sprints like an Olympian, and hides a lot of powerful excellence in a tiny, unassuming little body. We just can’t help but smile at the Golf R’s nose thumb at traditional sports cars.