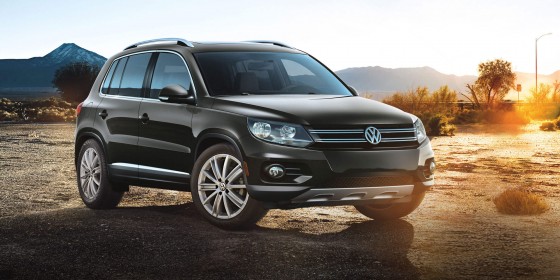 The Tiguan is a continuation of the best crossover Volkswagen has made so far. Although its design is getting on in years, the 2015 Tiguan is as near to timeless as it can be. It features a sporty attitude and a premium appeal that others in the segment do not.

As with most vehicles from the German automaker, the 2015 Volkswagen Tiguan has an appeal that is difficult to point out directly, but that is viscerally understood by those who’ve enjoyed it. Some specifics might contribute to that, such as the sporty look, great engine performance, or fun drive, but none of these things are exactly “it.” That “it” is just there.

Whatever that is, though, it’s rarely rivaled in the marketplace, especially in the generally ho-hum small crossover segment. The Tiguan is offered in five trim levels and with seating for five. 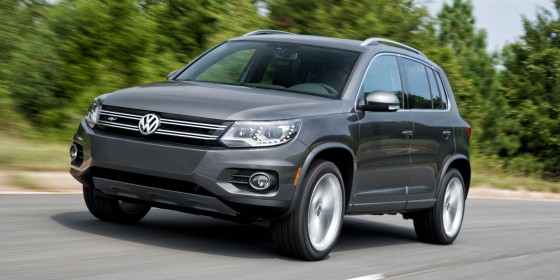 On first glance, the 2015 Tiguan is a bit plain, but that impression quickly changes as the simplicity of form begins to sink in. This crossover has some throwback styling elements to it, which add to its character, but also carries looks that, on the whole, are equally at home last decade and into the next. It’s a rare thing for a vehicle, let alone a crossover, to have that sort of appeal.

The Tiguan’s design begins with a sedan-like front fascia that is narrow and wide, with strong lines to the grille and with narrow, almost squared headlamps. This continues with a low, sedan-style hood whose lines are simple and straight. The windscreen comes up with a curve rather than a rake and flows into a roof-line that apexes at the driver’s head and then begins to taper downward towards the small rear spoiler.

The body lines are simple, with a character line running across the doors, through the handles, and over the rear fender to the tail-lamps. The door panels are otherwise unadorned and the rear quarter features a thick pillar and slightly protruding rear bumper. The rear has a gentle curvature and rounded appeal that is dominated by a wide, rounded back glass and long, rectangular tail-lamps that mirror the headlights up front.

Our test model was an S 4Motion base trim without added adornment and it looked very upscale despite that.

Although there’s nothing budget about the Tiguan’s interior, there’s also nothing particularly stand-out either. Quality materials and logical, Germanic design are the basis for the very premium appeal that the VW Tiguan’s cabin gives. Even our base model with its cloth seating and low-end 5-inch infotainment screen felt more like the premium-level trims we’ve experienced in competing crossovers.

The seating in the 2015 Volkswagen Tiguan is excellent, with the same kind of hard, but very comfortable appeal your grandma’s couch might have. This old school approach is refreshing as it’s a reminder that sometimes modern cush is not as comfortable as we think it is. Legroom, headroom, and shoulder room in the front seats are very good and the driver has plenty of knee room. From the base model on up, adjustment options are excellent.

The rear seating is similarly comfortable, but not as roomy as up front. Headroom in particular suffers thanks to that sloping roof-line, but only the tallest of passengers will really feel cramped by it. Legroom is also a bit less than it could be, but on par with the rest of the compact crossover segment. The 40/20/40 split-folding rear seating is also a boon when passengers and their skis or fishing gear must be taken along, allowing the center section to fold while the outboard seats remain occupied.

Cargo space is much smaller than is common in the segment, however, and is the greatest downside to the 2015 Tiguan. It’s about half of the segment-leading Honda CR-V, but unless you tote a lot of gear, it’s adequate for most daily needs and for the weekend getaway. 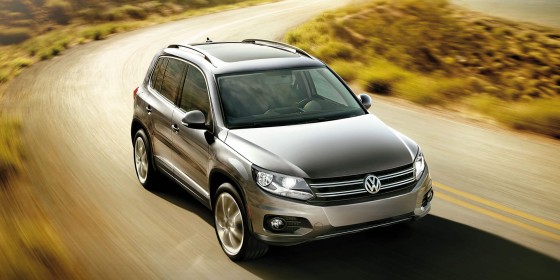 The VW Tiguan shines in the one area that nearly all Volkswagen models do well: performance. Powering the crossover is a 2.0-liter turbocharged four-cylinder engine that outputs a respectable 200 horsepower and 207 pound-feet of torque. A six-speed automatic transmission comes standard, as does front-wheel drive. All-wheel drive, called 4Motion, is an option.

The EPA rates the FWD Tiguan at 23 mpg combined (21 city, 26 highway). The AWD achieves the same combined rating, but with slightly lower city mileage at 20 mpg.

The Tiguan’s performance output and efficiency numbers fit somewhere in between the four-cylinder competition and the six-cylinder options still in this market. In the real world, with various cargo, passenger, and driving combinations over a week’s time, we managed 22 mpg overall, bearing out the EPA’s estimates.

Out on the road, the 2015 Volkswagen Tiguan is a great drive. The engine is peppy and motivates the crossover very well. The wheels flung out to the corners mean that the Tiguan handles nimbly and is highly maneuverable around the parking lot or garage and a well-tuned suspension means it’s also very good at speed around corners or in and out of traffic. With 4Motion, it also does well off the pavement in light off-roading. 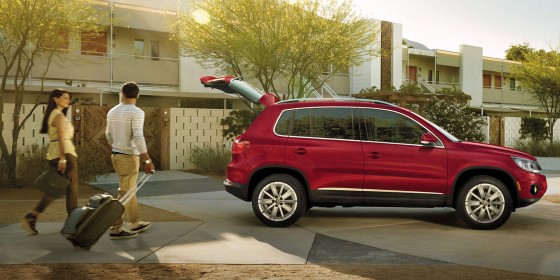 A few competitors are worth mentioning as spiritual marketplace rivals of the VW Tiguan. The Mazda CX-5, for example, is a great looker with a similarly sporty attitude and upscale interior. The Ford Escape has a similarly fun turbocharged presence and drive. Neither of these rivals have the Teutonic flare of the 2015 Volkswagen Tiguan, but they are nonetheless worth cross-shopping if you’ve found that the Tiguan is a strong possibility for you. 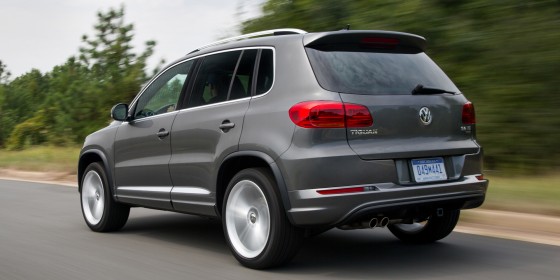 In our week with the Tiguan, we carried up to four passengers, had all of the accoutrements that a family road-tripping with small children carries for a weekend getaway, and also drove it daily as a grocery-getter. At no time did we feel it was inadequate. The 2015 Volkswagen Tiguan is a well-rounded, solid little crossover that has everything you could ask it for. It’s fun to drive, comes well-stocked even in its base form, and features a great style and versatile interior.