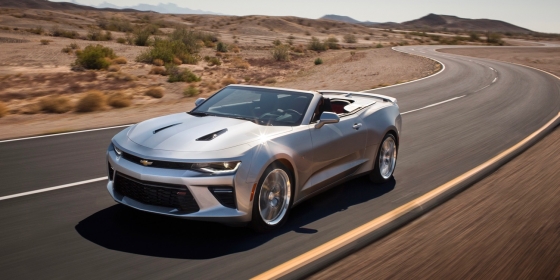 With a new design for 2016, the Chevrolet Camaro is a hot-looking chunk of Detroit metal. A lot has changed in the world of American muscle, but a few things remain constants. Performance is one of those things. While today’s muscle cars might not always have the massive amount of engine displacement their predecessors did, they definitely have the power and finesse to outrun most of those old-generation machines. The 2016 Camaro is a beautiful mixture of nostalgia and modern power.

On paper, sports car enthusiasts will be most interested in the Camaro’s throaty V8 option, the big SS. For most normal folks, though, the fun times are found in the less expensive but still enthusiastic V6 models of the Camaro. This might sound like an anathema, but volume sales for any American pony car you wish to name are in the lower-end models. Knowing this, Chevy put a lot of effort into the mid-range V6, which sees a substantial horsepower boost and a beautifully done interior. Add on the affordable (and well-done) convertible top and you’ve got a great sports car.

We spent a week in the 2016 Chevrolet Camaro Convertible in its 1LT package. This included the RS package and the V6 upgrade, which brought the car’s window sticker to about $38,800 delivered. For under $40k, you’re getting a lot of car. It’s both a competent (and surprisingly fuel efficient) everyday driver and a fun weekend romper. Drop the top and things just get better. 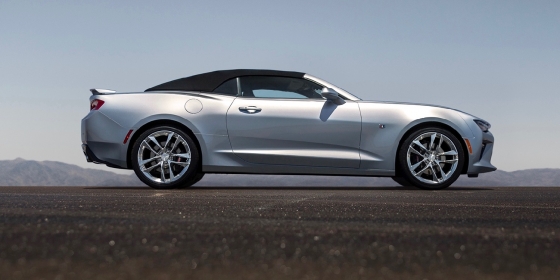 The new Camaro has a far more muscular look than it did before. Where the previous-generation was tail-heavy, with a rump that would make many ghetto birds jealous, this new design balances the look better with a more substantial front-end to match that hiney. The typical Camaro face remains, though the grille has been thinned in favor of a wide intake below, further accenting the new, thinner headlamps with their more aggressive look. The flat hood humps just right to let you know that there’s power under there and the fenders at front flare out to promise better handling.

The low roof is indicative of the Camaro, of course, and the fastback coupe rear look is also a hallmark. The door panels, however, receive a lot more attention this time around, with added cuts and curves to make the 2016 Camaro look a little more sophisticated. The heavy rear haunches are still there, of course, but have been given a little more taper at the rear, making them less baudy.

The overall look of the 2016 Chevrolet Camaro is very well done. The car’s long history is continued with just enough nostalgia to keep the past alive, but without dwelling on it in lieu of modern expectations. 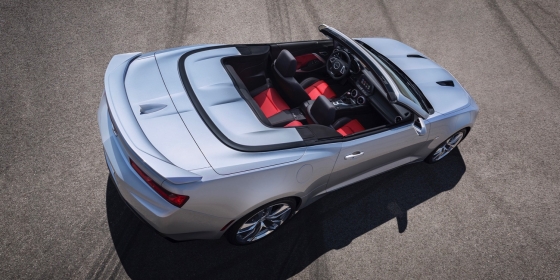 Perhaps the most telling improvement to this new Camaro is the interior. Hints at the previous-generation are still there, but parts taken from the award-winning Corvette and more than a few designs of its own are now seen as well. The instrument cluster is far more usable and clean-looking than it was before and an innovative climate control set is integrated into the central air vents, simplifying the dashboard without making it difficult. For the most part, interior materials quality is very good for the price being paid. Especially in the seating. 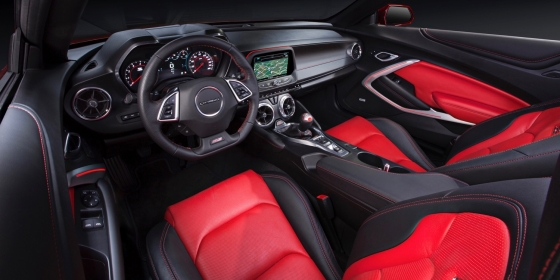 The front seats are much more daily-use friendly with better bolstering and smarter lining for added comfort. Even the big and tall will find them very accommodating. The rear seats are, of course, largely for insurance purposes, but two children in booster seats can sit back there without fuss.

Trunk space is good, though not great. With the convertible, it becomes almost non-existent with the top down. A couple of checked bags can fit in the trunk when the top is up, but once it’s down, a carry-on and perhaps a purse are about all that will fit. This is the drawback of most convertibles, but a price readily paid for the fun times had with the top down.

Infotainment is based on Chevrolet’s newest MyLink, which comes standard on a 7-inch touchscreen in the 1LT package and above. A Tech package increases the touchscreen to 8 inches and adds a nine-speaker Bose system. Android Auto and Apple CarPlay are standard equipment on both MyLink systems. Similar to past Chevy infotainment, we found this to be easy to use for most regular tasks. 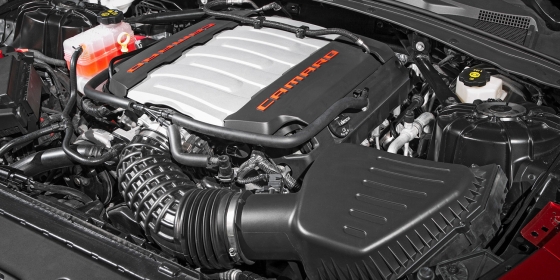 There are three engine options for the 2016 Camaro: a four-cylinder, a six-cylinder, and an eight-cylinder. All of them return sub-6-second 0-60 mph times, according to Chevrolet. The 2.0-liter four-cylinder is turbocharged to 275 horsepower and 295 pound-feet of torque. The V8 displaces 6.2 liters and churns out an impressive 455 horses and 455 lb-ft. We drove the V6, a 3.6-liter chugger than outputs an impressive 335 hp and 284 lb-ft. A six-speed manual transmission is standard equipment and an eight-speed automatic is optional with all three engines. We had the manual.

Chevrolet says that this V6 with the manual transmission is capable of 0-60 mph times of 5.2 seconds. The EPA says that this engine and transmission combination returns 21 mpg combined (18 mpg city, 27 mpg highway). In the real world, we saw 0-60 times of 5.6 seconds (averaged) on public roads and achieved 19.4 mpg combined overall after over 300 miles of driving. Those are close enough to what is claimed to make us say that the numbers expected are do-able in the real world. 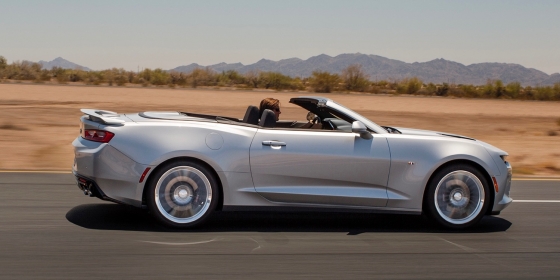 What really impresses, though, is the 2016 Chevrolet Camaro’s competence on the road. It’s not the cornering champ that the Corvette is, but it’s well ahead of the heavier and less limber Dodge Challenger. The Ford Mustang is probably equivalent now that they’ve gone to an independent rear suspension and our time in the 2015 model showed it to be vastly improved in the turns. We’d say it’s a draw with the Camaro in that regard. The Camaro’s V6, however, is more fun than the Ford’s, mostly due to the beefier sounds it has and the more natural flow of the power it produces.

The 2016 Camaro, even with the convertible top, is much quieter on the highway than expected as well. 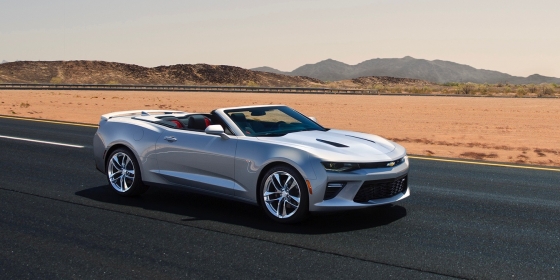 In all, the 2016 Camaro is a great car. For those who aren’t all about pure adrenaline and muscular output or who aren’t ready to wrap around a tree just yet, the V6 mid-range LT1 package is a sure hit. With powerful looks, a world-class convertible option, and great performance for the money, this is one chunk of American muscle you’ll want to flex.