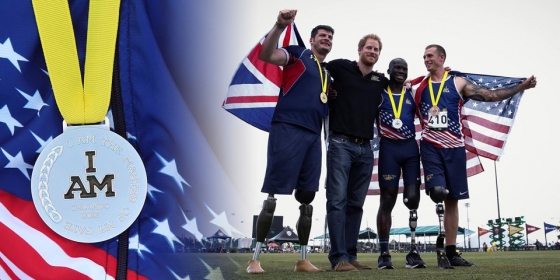 The Invictus Games are currently being held in Orlando, and we wanted to shine a spotlight on this awesome event created by Prince Harry back in 2014. The games allow wounded, sick, or injured armed services members from around the world to compete in Paralympic-style games. If you’ve been watching ABC or ESPN this week, you’re probably already aware of the Invictus Games, but for everyone else here is a bit of the story:

Most of us will never know the full horrors of combat. Many Service men and women suffer life-changing injuries, both visible and invisible, while serving their countries. How do these men and women find the motivation to move on and not be defined by their injuries? How can they be recognized for their achievements and not given sympathy? Prince Harry asked these questions. On a trip to the Warrior Games in the USA in 2013, he saw how the power of sport could help physically, psychologically, and socially. His mind was made up. London would host the inaugural Invictus Games, an international sporting event for wounded, ill, and injured Service men and women – both active duty and veteran.

Fifteen nations are invited to participate in the 2016 Games, which will be held from May 8 – 12, 2016 at the ESPN Wide World of Sports Complex at Walt Disney World Resort in Orlando, Florida. During that week, over 500 military competitors will take part in 10 sporting events as they are cheered on by thousands of family members, friends and spectators. They will compete not only in the spirit of cordial competition, but also in camaraderie among the competitors and nations.

Today Boston.com’s The Big Picture featured the Invictus Games, and we’ve selected some of our favorite photos to share with you below. See their post for the full gallery, and ESPN for coverage of the event.