Ever since we drove the 2012 version, the Optima has been our favorite Kia model. Car buyers certainly agree, as it’s also been their best-selling vehicle for the past three years. So we were delighted when we recently had the opportunity to drive the outgoing 2015 Kia Optima from Baltimore to New York for the unveiling of the sexy new 2016 Kia Optima. We already gave you a little taste of the new Optima when we named it #7 on our list of the Best of the New York International Auto Show, but today we wanted to give you a big bite.

Conceived under the watchful eye of Kia’s president and chief design officer, Peter Schreyer, with modern and instantly recognizable design cues, the Optima maintains its athletic identity but rides on a chassis that is longer, wider and stiffer for improved ride and handling and a more spacious cabin.Available with three engine choices, including a new 1.6­liter turbocharged four­ cylinder that’s mated to a seven ­speed Dual Clutch Transmission (DCT), the Optima is more confident than ever on the road.The all­ new Optima’s roomier, more luxurious cabin features an impressive level of craftsmanship that will come standard across five trim levels – LX, LX Turbo, EX, SX Turbo and SXL – when sales begin in the fourth quarter of 2015. As with its predecessor, the all­ new Optima will be built at Kia’s plant in West Point, Georgia.

There’s much to like here, but we’re particularly fond of the increased size, Bi-functional HID headlights with Dynamic Bending Lamps, and Apple CarPlay. It’s also going to have Android Auto, if you happen to be one of those people. We can’t wait to get behind the wheel of the new 2016 Kia Optima and see if it lives up to the fun we’ve had driving the previous models. 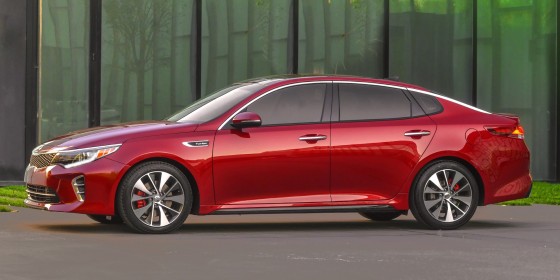