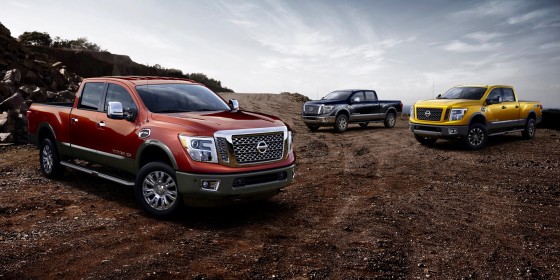 Nissan surprised many truck enthusiasts when it introduced the Titan XD about two years ago. When the company showed the production version at the North American International Auto Show in 2015, many tried to wrap their heads around this new pickup. Production finally began late last year and the 2016 Nissan Titan XD has shaken up the full-sized truck market considerably.

The Titan XD is a full-sized, half-ton pickup truck with characteristics that are similar to many heavy-duty (three-quarter ton) pickups. The EPA calls it a “heavy duty truck” due to its weight and design. Nissan calls it an “eXtended Duty” half-ton. Most in the industry are calling it a heavy-duty half-ton. The idea of an HD half-ton truck is not new, but it’s only now that a company has decided to make it a serious endeavor. Nissan is literally banking the future of its truck line on the Titan XD, aiming to increase sales margins in full-sized pickups by more than five times its 2015 figures.

Although many have scoffed at the idea of a truck that fits somewhere in between a traditional half-ton pickup and a heavy-duty truck, Nissan seems to have hit a sweet spot with the TItan XD. With its half-ton like drive, ride and hauling capacity coupled to its heavy-duty pulling and trailering power, the new Titan XD seems to fit right into a small, but under-served market of pickup buyers.

Add in the excellence of design and well-considered details that the 2016 Titan XD includes and you see a lot of potential for this big truck. The Titan XD comes as a crew cab and 6.5-foot bed in rear-wheel or four-wheel drive. The truck seats up to six and has five trim levels. 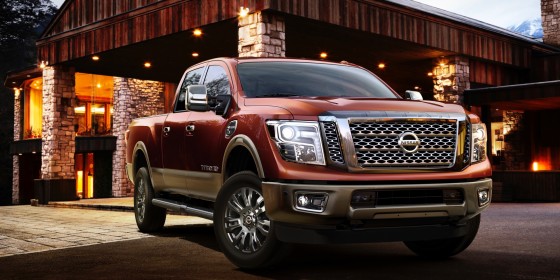 Compared to the outgoing generation of the Titan truck, the 2016 Nissan Titan XD is dimensionally huge. It has a bigger overall length, taller height, fatter stance, and longer wheelbase than its predecessor. Although the gasoline versions have not yet been revealed live, Nissan says that they will retain everything but the overall length, which will diminish a bit as the gasoline-powered options won’t require the under-hood space that the big diesel does.

The 2016 Titan XD has its front end dominated by its huge grille and wide headlights. A tall, flat hood rides atop those features and beefy fenders complete the package. Nissan did not want people to misunderstand what this truck is about either, making sure to include large Cummins engine badges on the front fenders and a wide, well-defined bumper beneath the grille work.

The windshield and coupe-styling of the previous-generation Titan are seen in the roofline and greenhouse of the Titan XD, though the light slope of the outgoing Titan is now gone, in favor of a more squared, business-like cabin design for the Crew Cab (the only body style available for the Titan XD). A short six-foot cargo box with plenty of tire clearance in the wheel wells and a strongly-defined rear bumper with heavy taillamps and a no-nonsense tailgate finish the Titan XD’s look.

We drove the Platinum Reserve package, the top fitting for this truck, and heard a lot of compliments on the beautiful copper-toned paint and grayed accents on the rig. An integrated gooseneck hitch and included tow hitch kit were also smart touches. 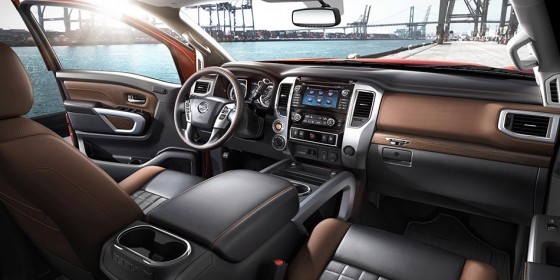 Compared to the old Titan, the new 2016 Titan XD has a very different, much more modern interior. Most truck enthusiasts who climb into the new Titan will instantly feel at home and see elements common to most truck makes inside the new Nissan. The overall look is robust, squared off, and functional. There are a few quirks, but few will find them to be deal breakers.

The column shifter is a big change for Nissan, whose always used console-mounted shift knobs. The shifter is, as one person described it, “the size of a Louisville Slugger.” It feels meaty and ready for action in your hand. Most of the other driving controls are similar, with a heavy-duty feel and intuitive use. The S and SV models have a front bench seat as standard while the other three trims have a large storage bin console between two front seats instead, with the bench being an option.

The integrated trailer brake control is a boon to the Titan, which has hitherto not had one. Another nice change is the general layout of the center console, which now has a familiar Infiniti-like look and operation for climate and infotainment. One caveat here, though, is that the buttons and knobs are a bit light, so those who wear work gloves or have cold hands after working outside may find those controls tough to operate. We noted this when getting into the truck after clearing snow off the windows and hood on a cold winter day.

As far as comfort goes, the interior of the Titan XD is top shelf. Everything feels good and comfort levels, whether bumping around on a dirt road or plying a freeway at speed, are excellent. Headroom is particularly generous and a friend standing over six feet plus his cowboy hat could sit in the truck without removing the hat. Another friend, whose girth is substantial, also found the interior to be well-sized. Even in the back seats.

Small touches such as the positioning of drink holders, the placement of underseat storage in the rear, and other features are all well done and on par with anything you’ll find in the industry. 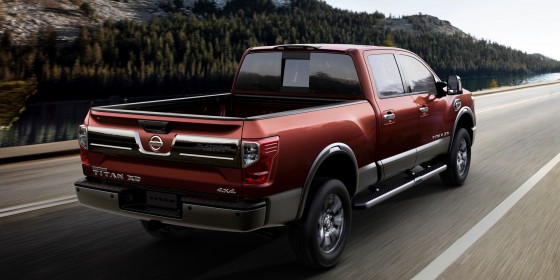 Saying that the 2016 Nissan Titan XD is built around its huge Cummins engine would not be inaccurate. Nissan wanted a heavy-duty half-ton from the outset and once the engine was settled upon, the rest of the truck’s shape followed. At least, that seems to be the case. The powerplant here is a massive 5.0-liter V8 turbodiesel that produces 310 horsepower and 555 pound-feet of torque. The transmission it mates with is an Aisin-built six-speed automatic that, in four-wheel drive models, has an integrated transfer case. 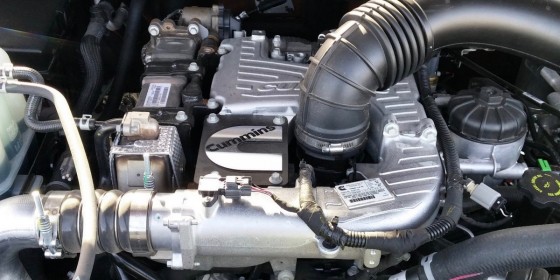 This engine, drivetrain, and indeed the entire truck are built to deliver that torque in a forward motion. The Titan XD is not about speed. Like most diesel trucks, it’s a little slow in the up-take, even unladen, and takes a while to get up to speed. There are a lot of advanced gizmos on the Titan XD’s engine that might seem like speed-enhancers, but they’re mostly there to improve pulling power and steady torque delivery, not speed. It takes about 10 seconds to get from 0 to 60 miles per hour in the Titan XD. Here’s the rub: you can do 0-60 mph in about that time with a 9,000 pound trailer too. And testing trailer lights after hookup is a one-man, remote operation thanks to a new system Nissan offers in the Titan XD.

Around town, the bulk of the truck is definitely obvious and it’s not exactly the easiest thing to park or maneuver. Anyone who owns a full-sized pickup truck, though, should be used to that idea and won’t have a problem there. The added electronics in our Platinum Reserve trim, which included backup aids and so forth, make life a lot easier around town.

Out on the road, paved or not, the Titan XD is a very well-mannered pickup with good comfort levels and lower noise levels than expected. On the freeway, it’s possibly the best heavy-duty drive we’ve ever been in when there’s no weight in the bed or on the hitch. 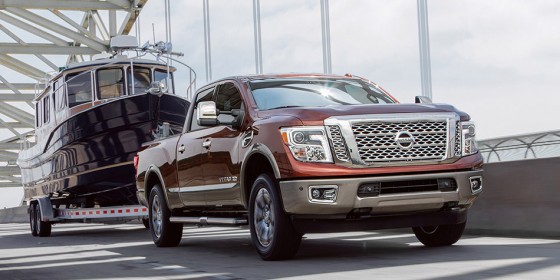 The 2016 Titan XD is made for towing and it’s very, very good at it. We pulled a 9,000-plus pound two-axle gooseneck trailer and cargo without any problems at all (the Titan XD is rated at over 12,000 pounds of towing). On the highway, the integrated trailer sway and braking controls are great and can be toggled with just the touch of a button.

We also pulled a smaller, lighter trailer on the ball hitch and found that to be equally as good. Finally, we hauled some furniture in the bed and outside of the tall reach to get things in and out of it, it was excellent. The optional tie-down system on the Platinum Reserve model we tested was a big bonus there.

In all, everything the Nissan Titan XD was designed to do are things it does very well. 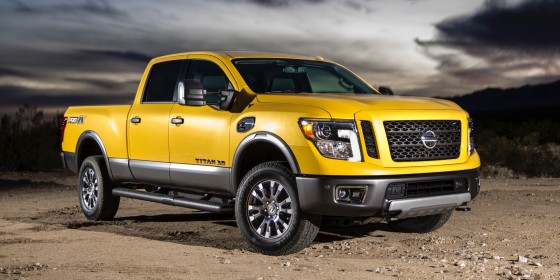 To sum up the 2016 Nissan Titan XD is easy. It’s a truck made for towing and pulling and it’s very, very good at that. It’s priced lower than the equivalent in a three-quarter ton truck, has options to match just about any expectation, and looks and feels solid and capable. This new truck from Nissan is a definite winner.