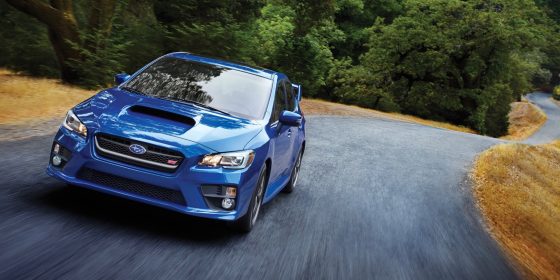 There are few cars as inherently awesome as the Subaru WRX. The car was literally named after World Rallycross and the special STI has been the embodiment of that sport for years. For the 2016 model year, we test drove the Series HyperBlue edition with a host of fun-time goodies. For reference we also spent a week in the standard WRX edition, just to make sure we knew the differences. You know, for science.

Those differences are significant, assuming you’re a rally fanatic. For everyday driving, the 2016 Subaru WRX, especially in its Premium edition as we drove it, is a fun-driving, sport-infused little car with plenty of daily practicality to justify its existence to the significant other. For those who love the dirt, it will do pretty well as a weekend fun ride. For those who want to win races, though, the WRX STI is where it’s at. For about $10,000 more, you get a seriously rally-ready street legal little goer. Money well spent for true enthusiasts.

The Subaru WRX saw a complete overhaul for 2015 and for 2016, only a handful of changes have been made – most of them welcome to those who might want a little more daily use out of their sedan. The infotainment sees a big upgrade to better smartphone app integration and ease of use. For the STI specifically, the Series HyperBlue comes as a limited edition color for 2016. 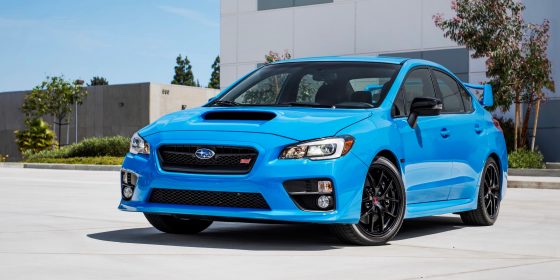 The 2016 WRX STI is based on the Impreza sedan, but with the addition of several elements that differentiate from its more sedate counterpart. There is a large air scoop in the hood, a choice of integrated rear spoiler or the large aero wing the STI is known for, and tight tires and wheels that show little gap between wheel well and tire’s edge. All marks of a sports sedan. Subaru blue and red STI badging is also seen on the front grille and at other points inside and outside of the car.

The WRX STI is otherwise a four-door sedan with a long hood, clipped rear deck, and rounded, fast-paced roofline. Deep cuts at the bottom of the doors create a running board and a line across the upper panels at the door handles creates the beltline. The design is otherwise simple and to the point. In the Series HyperBlue as we drove it, a bright powder blue color really sets the car apart. It’s a great look for this sedan that is one of the few colors we prefer over the popular WRX Blue often seen. 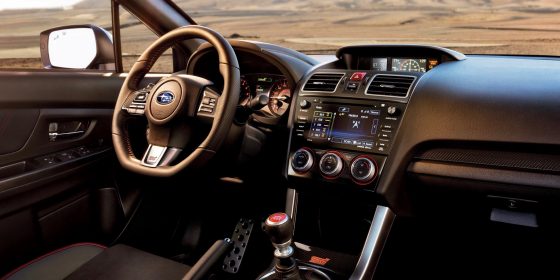 As with WRX models of the past, the 2016 Subaru WRX STI is pretty basic inside. Subaru did put some improvement into the materials quality and seating, however, and really beefed up the upgraded infotainment option to add a lot of connectivity. Controls are fast and easy to access, although the advanced powertrain controls for differential shifting and such will require practice to master. It’s well worth that effort, though, if you’re really going to drive this fun machine like it deserves.

The base infotainment is a 6.2-inch touchscreen with most of the standard functions you’d expect out of a modern audio system. The upgraded screen in the STI is a 7-inch with the full suite of Starlink options from Subaru. This system will have most audiophiles and technofreaks happy with their upgrade choice.

Seating in the STI is excellent with plenty of room for all but the largest of folks. At 6-foot 3-inches and well over 200 pounds, I fit nicely in the 2016 WRX STI and felt comfortably ensconced during hard driving. The steering wheel, seating, and such offer plenty of adjustment to accommodate. Even the back seat is roomy for a compact sedan. Those with long legs will not want to spend a lot of time back there, but for getting around and for shuttling kids, the Subaru WRX does well as a daily use car. The trunk is equally spacious at about 12 cubic feet and split-fold rear seating is standard in the WRX and STI models. 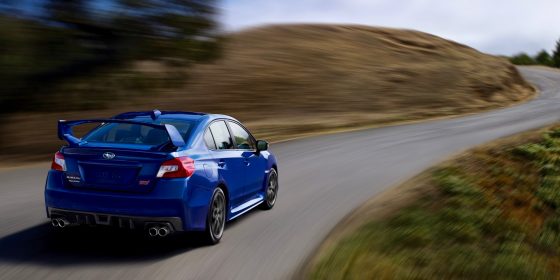 The STI model features a very well-tuned 2.5-liter turbocharged four-cylinder boxer-style engine that outputs 305 horsepower and 290 pound-feet of torque. A six-speed manual transmission is the only option, but it’s a doozie with a short shift throw and very positive clutch for precision shifts. With this are front and rear limited-slip differentials, a driver-controlled center differential, and a much more aggressive suspension than is found in the standard WRX models (which themselves are already pretty tight). The STI also adds more race-tuned braking from Brembo.

In performance driving, we eked out 5.5-second 0-60 mph times on public roads and a couple of tenths better than that on a closed dirt track. The aforementioned Brembos come into play when hard braking in the elements is taking place, with dirt and hard use doing little to fade them out. 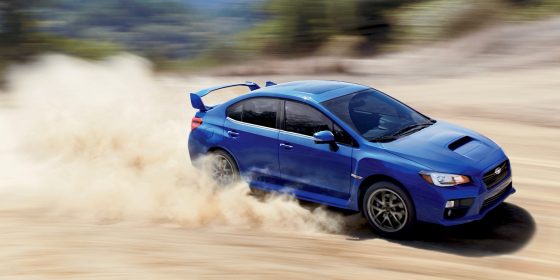 Where the 2016 Subaru WRX STI really shines, of course, is in rally conditions, which we obtained in a mixture of on and off-pavement running with light mud and snow thrown in. The STI glides beautifully around sloppy corners and barks the J-turn like the champ that it is. Once you’ve mastered the center differential controls, going from pavement to dirt to surface mud to ice is an easy trick with little loss in control or power output to the ground. Between the vectors you can set fore and aft and the limited-slips on each axle, sliding should only happen when you want it to. That’s how solid this little race car really is. 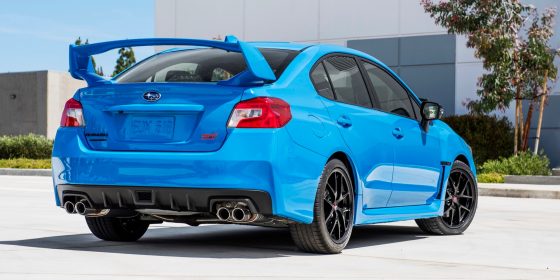 There is a lot of fun to be had in the standard Subaru WRX model and we don’t fault this car as a great choice for drivers who want a driver-centric, sporty drive with the fun of all-wheel drive and the practicality of a daily use car. For those who really want to hit it and rally it hard, though, the STI becomes the only choice. With more power, more fun, and better equipment for hard use, the 2016 Subaru WRX STI is a great little machine. Add in the awesome Series HyperBlue limited edition and you’ve got a really kickass little ride.