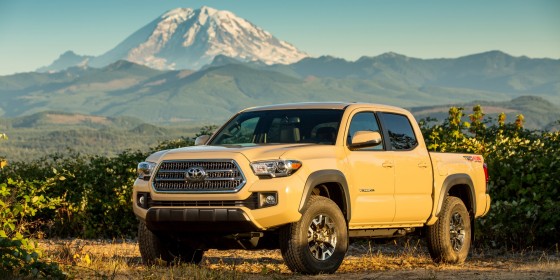 The 2016 Toyota Tacoma is the all-new third generation of America’s best-selling mid-size pickup that is set to hit showrooms later this month. Assembled in North America, the Tacoma has been rebuilt inside and out with an all-new powertrain, enhanced suspension tuning, bad ass styling, and increased overall strength.

“For more than 50 years adventure-seeking Americans have relied on Toyota trucks to take them places, on and off-road,” said Bill Fay, group vice president & general manager, Toyota Division. “The all-new homegrown Tacoma is a tough truck designed, developed and built for lifestyles of the young and young-at-heart.” 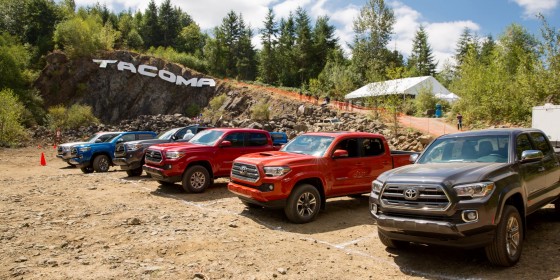 As you would expect with a truck, there are 29 configurations of grades, capabilities, cabs, and beds to choose from with varied pricing to match. The entry level price for a base Tacoma 4×2 SR Access Cab with the 2.7 liter, 4 cylinder engine is $23,300. A fully-loaded Tacoma 4×4 Limited with a 3.5 liter, 6 cylinder engine will set you back $37,820. That new V6 generates 278 horsepower and 265 lb.-ft. of torque.

Recently we were invited out to Seattle, Washington (or Tacoma, get it?) for a first hand experience with the all-new Toyota Tacoma. For reasons that should be obvious, we spent the majority of our time behind the wheel of the Tacoma TRD Off-Road grade priced at $34,630. It’s inspired by Toyota Racing Development’s more than 35-year history in desert off-road racing and a heritage of vehicles that have helped off-road enthusiasts conquer the toughest terrains in the most remote locations around the globe.

Our destination was the property of an abandoned coal mine, which had been converted into a Tacoma off-road playground. Here is a little taste of how we spent a delightful day in the dirt, testing the capabilities of Toyota’s mid-size pickup truck.

Toyota put together a series of off-road obstacles, primarily to demonstrate Tacoma’s new Crawl Control and Multi-Terrain Select systems. Multi-Terrain Select allows the driver to choose between different types of terrain such as loose rock, or mud and sand. Each input regulates wheel spin by adjusting throttle and brake pressure to provide maximum traction on almost any terrain. Engaging Crawl Control allows the driver to select a speed of 1-5 mph. The Crawl Control system takes over the acceleration and braking, allowing the driver to focus solely on steering. It allows the driver to maintain a constant low-speed for maximum control while it modulates the engine and brake torque of each individual wheel to maintain traction. In the photos below you can see that same system is utilized for rock-crawling, and unburying a Tacoma’s wheels from a pile of sand.

If you’ve ever encountered either situation, you probably already understand the benefit, but we’ll elaborate. When slow crawling on rocks, you normally work with a spotter to ensure proper placement of your wheels to get through the obstacle successfully. Having to manage the throttle and the brake at the same time is quite challenging, and can easily lead to damaging your truck. So setting the crawl speed appropriately allows you to focus on your spotter as the Crawl Control takes care of slowly moving you forward at the proper speed. In the other example, obviously using Crawl Control to dig out of the sand is much easier than using a shovel. 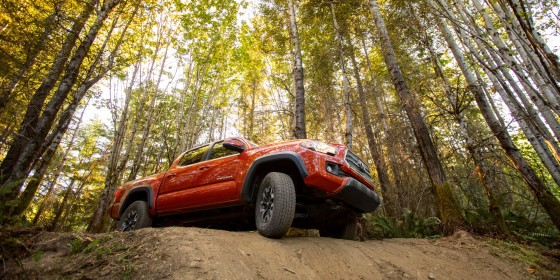 Next up for the Tacoma were a couple of obstacles that showed off some impressive articulation. Articulation refers to how far up and down the suspension allows each wheel to move in order to remain in contact with the ground to maintain traction. TRD Off-Road models include an off-road tuned double wishbone front suspension with stabilizer bar and leaf spring rear suspension with Bilstein shocks. They’re combined with the electronically controlled transfer case, automatic limited slip differential, and a locking rear differential to handle off-road terrain with relative ease.

In both obstacles pictured above, we were able to push the Tacoma to get a wheel off the ground, but still powered through with plenty of torque. We’re also showing off the 9.4 inches of ground clearance and traction from the Goodyear Wrangler All-Terrain Adventure tires. The photograph below is where the day gets really fun though, with a hill climb that shows off the 32° approach angle (29° on the other grades). The departure angle on this Double Cab is 23.5°, and we did experience a bit of scraping if we didn’t take the proper line into this obstacle. 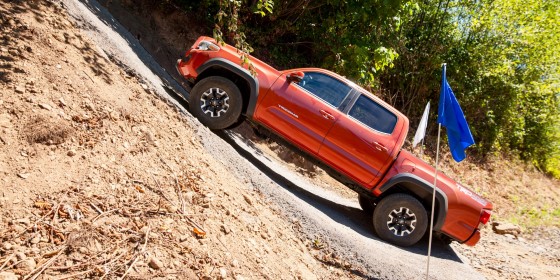 This “Double Drop Hill” was another place to show off the Tacoma’s Crawl Control, which made easy work of the 40° incline. However we get the feeling that most off-road enthusiasts wouldn’t dream of using such a system. It certainly gets the job done, but we found it to be very jarring with its combination of torque and braking that made a hideous racket. We’re far from experts, but have a reasonable amount of experience driving off-road once or twice a year in a variety of vehicles over the past decade. While the angle was a bit intimidating at first, we had no problem navigating this obstacle without the Crawl Control, multiple times both up and down, and found it a much smoother and more rewarding experience.

Which leads us to question what the target market is for such a function. It certainly works, and is quite impressive, but are the customers that would need Multi-Terrain Select and Crawl Control systems in order to feel confident driving off-road likely to purchase the Tacoma TRD Off-Road? Will the enthusiast customers who are likely to purchase the Tacoma TRD Off-Road ever use the advanced features they are paying for? We stopped pondering that which shouldn’t concern us and went back to enjoying our day off-roading in the gorgeous Pacific Northwest.

The 2016 Tacoma TRD Off-Road has some new features to boast on the inside as well. It features Qi wireless charging and a GoPro mount located near the rear-view mirror. Both are relatively simple additions, but we thought they showed a keen awareness as to what the current generation of enthusiast wants in their truck. Above you can also see the controls for the advanced off-road functionality that are positioned overhead, which we found to be inconvenient and hard to see for taller drivers. However they do tend to be out of sight when you don’t need them, and less likely to get bumped accidentally. 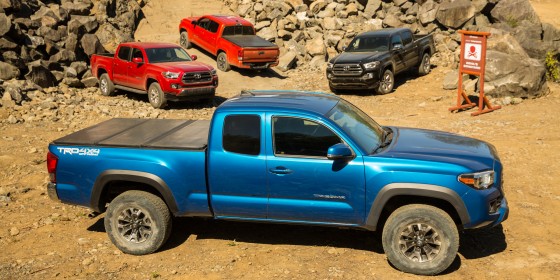 A favorite among off-road enthusiasts, the Toyota FJ Cruiser, is no longer being produced for multiple reasons. One of its main competitors, the Nissan Xterra has also been discontinued. Most SUVs these days are actually CUVs with unibody construction instead of body on frame, which severely limits their capability off the pavement. For the off-roading community, the SUV choices are dwindling, and it seems that mid-size trucks are a viable alternative if you don’t mind the longer wheelbase. We found the 2016 Toyota Tacoma TRD Off-Road to be plenty tough, capable, and bad-ass looking to serve as our next trail rig (in Inferno Orange, of course). It also has the added bonus of that composite bed, allowing us to haul the occasional load. Just don’t ask us to help you move, we’re going to be busy out getting it dirty.