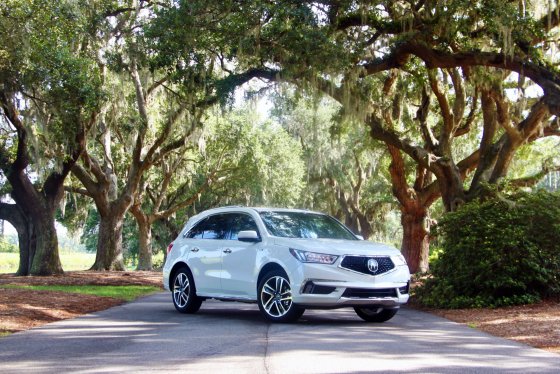 The MDX is Acura’s three-row luxury SUV that was originally introduced in 2000, and is now on its 3rd generation. A major refresh came with the 2017 model, which included many improvements, most notable among them was the introduction of a hybrid model. The 2017 MDX Sport Hybrid is Acura’s first-ever hybrid SUV and the technological flagship of the Acura SUV lineup.

We recently spent a week behind the wheel of the Acura MDX Sport Hybrid, and drove it over 1000 miles on our road trip to the Hammock Coast of South Carolina. The MDX Sport Hybrid was perfectly suited for the trip, with its compelling combination of capable luxury, sporty performance, and impressive efficiency. 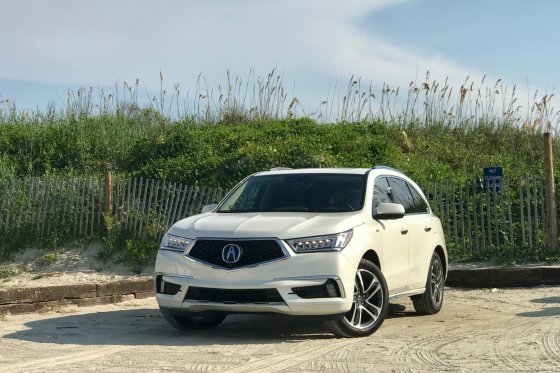 The exterior re-design of the 2017 Acura MDX is most noticeable in the significantly improved front styling. We’re not ashamed to say that we strongly disliked the look of the outgoing model, especially that hideous “metal beak” that was previously part of Acura’s signature grille. The new diamond pentagon grille represents the new face of Acura, and we find it to be a much prettier face indeed. It’s accompanied by a more sculpted hood, front fascia, front fenders, and revised Jewel Eye LED headlights for a look they call “executive athletic.” Whatever you call it, we find it sharp-looking, and a major upgrade for the new model.

As you can see from our photos, we didn’t miss a chance to take a photo of the MDX Sport Hybrid in front of any attraction we visited in South Carolina, and the front or 3/4 view is definitely our favorite angle. The Sport Hybrid came with 20-inch aluminum alloy wheels, body color lower side sills and skid garnishes, some fancy chrome trim and roof rails. Overall we thought it was smartly composed, but we do find the styling and shape of the D pillar to be a bit awkward. The MDX is not the best looking luxury SUV on the market, but it’s much improved and certainly isn’t the worst looking either. 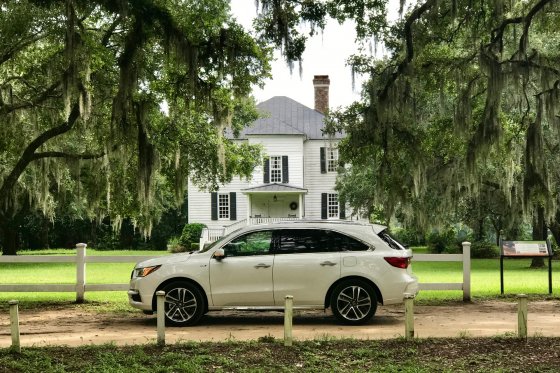 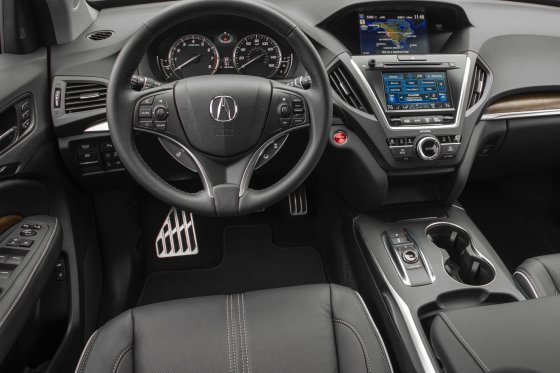 When we drove over 1000 miles in the Acura MDX Sport Hybrid, we did it from the driver seat of a well-appointed interior. That’s kinda the way driving works. So even though we took plenty of photos of the exterior, it was the interior we were enjoying while driving, and where we’ll utilize press kit photos from Acura to ensure we do it justice. The MDX is definitely spacious, and it was quite comfortable for our long drive with its standard leather seating. We also found it was equipped with plenty of storage, and connectivity options to keep all of our devices charged.

We were also quite impressed with the flexible storage space in the rear, which did not seem to be limited by the hybrid batteries at all. We even used the convenient in-floor storage to hide valuables, or separate out wet gear after a day at the beach. 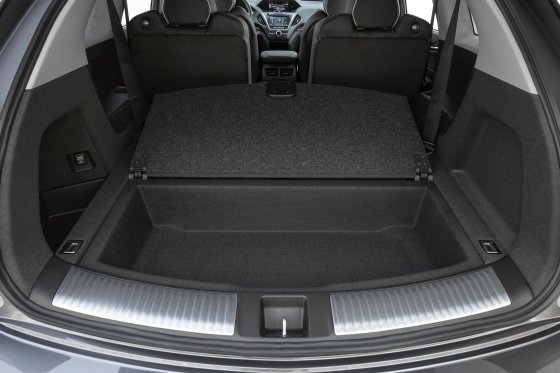 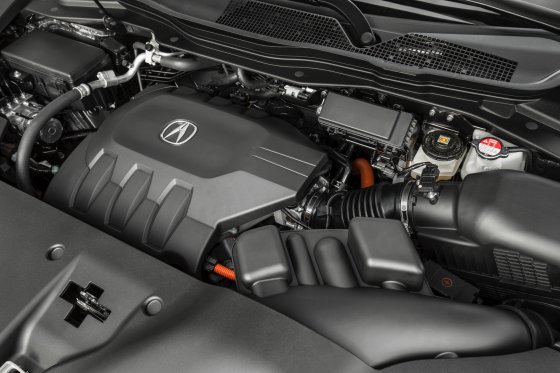 The powertrain is obviously where the Sport Hybrid differs the most from the standard Acura MDX. A regular MDX comes with a very capable 3.5-liter direct-injected i-VTEC V-6 engine rated at 290 horsepower and 267 lb-ft or torque. It’s also rated at 20 mpg city, 27 mpg highway, and 23 mpg combined.

The Sport Hybrid on the other hand utilizes a 3.0-liter SOHC i-VTEX V6 engine powered by gasoline that is partnered with three electric motors in their Sport Hybrid Super Handling All-Wheel Drive system. The first electric motor is built into the 7-speed dual-clutch transmission to power the front wheels, and a Twin Motor Unit (TMU) provides instant torque and more responsive driving to the rear axle. The MDX Sport Hybrid powertrain boasts a total system output to 321 horsepower and 289 lb.-ft of torque, making it the most powerful Acura production SUV ever built. As you can tell, one of the main benefits of the Hybrid comes in terms of power and performance, but it also provide a substantial boost to fuel efficiency in city driving, which increases to 26 mpg. That helps combined fuel economy reach 27 mpg, up 4 mpg in the Hybrid.

The Acura MDX Sport Hybrid offered the smooth and quiet ride that you’d expect from a luxury SUV, but we also found it very responsive to drive, with more than enough power to muscle the three-row SUV down the highway on our road trip. We also concluded that the estimated 27 MPG was right on the money from our driving experience, which is a fairly impressive number for a vehicle of this size. 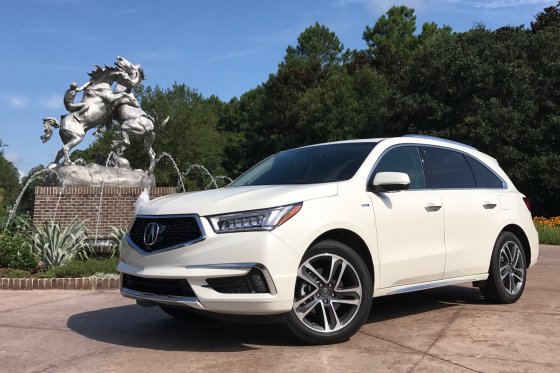 When we stated in the the introduction that the Acura MDX Sport Hybrid was perfectly suited for our trip, we definitely meant it. The newly redesigned and sculpted front styling reminded us of our visit to the fabulous Brookgreen Sculpture Gardens. The spacious and flexible cargo area provided plenty of room for our clubs and gear when we visited Caledonia Fish & Golf Club. The SH-AWD system handled the sand on Pawley’s Island with ease, and the luxurious Acura MDX felt right at home parked in front of the stately Hopsewee Plantation.

The 2017 Acura MDX Sport Hybrid offers a compelling combination of luxury, utility, performance, and efficiency. It’s offered at $58,000 as tested, and is available now in Acura dealerships. We enjoyed our time with the MDX Sport Hybrid and would definitely recommend a test-drive to anyone who is in the market for a three-row luxury SUV.